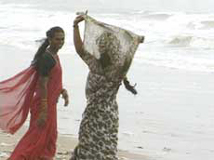 “Who knows what souls arrive at your door, in what form?” So explains a Bombay small shopkeeper of his repeated money donations to the two striking figures who darken his doorway each week. It’s the warding off of future bad luck this shopkeeper hopes to achieve while the very loud and public displays of the insistent beggars makes his donation a not entirely voluntary one.

Indians believe that one becomes a eunuch through past demons while at the same time eunuchs (hijras in India) claim to be descendents of the goddess Mata and historically had a revered place in religious rites and government positions. It’s this position of lived cursedness, suggested mysticism, and historical importance which sets the conflicted stage for the family of hijras who feature in the Indian/American production, Bombay Eunuch.

Part anthropological study of the old school of ethnographic documentary (complete with a talking head white expert), part observational documentary, Bombay Eunuch was originally conceived as an exploration of gender identity by its three American based directors, academic students of gender and religion studies. However access via a local social worker, Deepa Krishnan, to a family of hijras and their leader/mother, a compelling character named Meena, meant the film found its central narrative in the story of a community of hijras, organized as a family, and their struggles to survive on the fringes of ghetto life.

Strong and commandeering, the impetus always economic survival, Meena obtains a wage from the filmmakers in order that they may join her and her daughters in their day to day work of begging and prostitution. The hijras are formerly young countrymen who endure backyard castration with twine and knife in order to live as eunuchs in the city. Neither men nor women the Meena’s hijras see themselves as a third sex, “God didn’t let me be born a man but I have ten times more happiness then a woman has” chuckles one hijra. Being a hijra gives them the freedom of expression denied in the culturally prescribed space of traditional society. Walking down the street in pairs or groups the hijras are brazen, overtly sexual and openly emotional. Living with a family of supportive women they escape the individual oppression and expectations from men though much of their livelihood depends upon the avid interest of prostitution-seeking men.

Bombay Eunuch follows Deepa’s responses to the group, and through this, the viewer also attains valuable insight into her subjects. She rejoices in the openness and camaraderie of the hijras, their unique lived insight into gender and their often bawdy humour. The film becomes a celebration of their independent spirit. Due to the forces of Westernisation and its binary ideas of gender, the historical position of the hijras, numbering 1.3 million, has gradually eroded. However Meena’s example reveals that the bonds of a found family can provide a means to self-realization. Life remains precarious and Meena’s determination is focused on survival.

The first half of the film takes an often disconcerting, but entirely familiar, ethnographic criss-cross route: from the abject poverty and fight for survival in the Bombay ghetto to a Harvard academic analysis on the historical place of the eunuch in Indian society. Bollywood film clips chart the hijra’s twentieth century representation in film. However, the film is derailed in a dramatic and disruptive way when the filmmakers return to their subjects after an eight-month absence. The thread of survival has all but been broken. The ravages of AIDS have denied the infected hijras an income and sent many back to their families in the country where some are unable to live as hijras and must dress as men. With a total absence of education about HIV infection, the hijras become outcasts once more and suffer their family’s recriminations. The diminishment of her family numbers means Meena’s power and income is threatened; such is the need for employable ‘children’ in Indian society for old-age security.

A conference of hijras is heard about and it is suggested that Meena and her group attend as a way of hijras positively organizing together to tackle their problems. Travelling by train, the hijras discuss their place in society and the reactions of those around them, set against the background of flowing countryside. A journey that begins in hope however turns into one of pain. Upon arrival, the camera casts its gaze on the exterior of a fortress-like building – not a person in sight. It transpires that the conference’s organizing, elder hijras are furious at Meena and her group for arriving with a camera crew and are not welcome. The social stratification of Indian society doesn’t escape those on the fringes. Traditionally hijras are asexual aesthetes and prostitution conflicts with a hijra’s demand for respect. It places Meena’s family on the lowest rung – outcast amongst the outcasts.

The threat of fines or excommunication from the elders leaves Meena angry and despairing. In a long and harrowing scene Meena rails at the filmmakers – they can leave and return to what for her remains unattainable security while she and her daughters are at the mercy of any negative effects the filmmaking process may have. She discloses that she agreed to the film in order to further her security but now it looks as if that security is threatened. The events also cause Deepa to state her ambivalence about the suitability of making films about people. The filmmakers’ response is not given.

The film’s denouement is carnivalesque – out of the perversity of life, and beyond the ongoing question of the ethics of ethnographic documentaries, Bombay Eunuch adds another twist to the narrative of survival. Purely through chance, a year after filming has ceased, the directors happen upon a BBC news segment about ‘debt-collecting Bombay-style’. Meena and her fellow hijras are seen on the TV screen with a new occupation – being employed to cheerfully bully debtors into paying up.

The British current affairs reportage is glib in tone and the hijras are portrayed as both shocking and humorous. But hopefully Meena and her family are getting the last laugh and hijras are gaining some kind of ‘respectable’ use and employment in modern India. Whether the filmmakers will ever again casually embark on involving themselves in the lives of severely disadvantaged people to further their studies in gender and religion is an unanswered question but somehow I think not.

Like ghosts casting a shadow, the silhouette of an Orthodox father giving his children a bracha (blessing) can be seen on a backlit scrim. Many people are gathered around a long table and the scene is rich with ritual and communality. From this image of family, religion and belonging, director Sandi Simcha DuBowski launches his first documentary, Trembling Before G-d, a five-year journey through many countries and the culmination of numerous interviews with Jewish Orthodox people of queer and straight sexual preferences.

Can one be an Orthodox Jew and an open and ‘practicing’ homosexual? This is the profound dilemma which places DuBowski’s gay and lesbian interviewees, who represent a spectrum of Jewish levels of observance, between a rock and a hard place. Not without almost inevitable ostracism from family and community, appears to be the answer. Yet this is a reality the documentary’s subjects find understandably all too painful and unacceptable.

The intense taboo nature of homosexuality in Orthodox Jewish communities sends Trembling Before G-d (the ‘o’ is intentionally left out in observance of Orthodox Jewish law) into a time warp. Thankfully most gay and lesbian documentaries no longer have interview subjects whose faces are obscured in shadows but DuBowski, himself a gay Orthodox Jew, took five years to make the film because of the difficulty of getting subjects willing to talk openly on screen. Sadly the courage and pride of some of his gay and lesbian subjects is necessarily compromised by the message of shame communicated in their lack of disclosure.

In a traditional documentary format of filmed interviews intercut with observational scenes, DuBowski focuses on the personal struggles of his myriad gay and lesbian subjects rather then on giving an historical and theological overview. In many ways the film, peppered with Hebrew and Yiddish expressions and terms which are subtitled, is aimed at a Jewish audience and the film has been instrumental in getting the topic broached in the Orthodox Jewish community. A gentile audience, particularly if from a secular background, finds it difficult to understand the intricacies and histories of this religion and its exclusive community.

It is a challenge for the film to do justice to both the modern, secular priority of individual self-realization, and its consequent understanding of a multiplicity of sexualities, and to the strong spiritual and community connection many gay and lesbian Orthodox Jews feel toward a religion which severely censures their sexuality and casts them as sinners. The variety and vitality of DuBowski’s subjects gives expression to the complexities inherent in their dilemma. “Being Jewish is such a present” – Mark’s spirituality is palpable. A son of a rabbi he was sent to an Israel kibbutz by his British parents because “There are no gays in Israel”.

Interviews with heterosexual Orthodox Rabbis, who answer for the huge resistance to homosexuality within their community, are not edited to produce a confrontational or didactic polemic. Most Orthodox Rabbis remain resistant to changing their advice from that of “struggle to overcome, live a celibate life” and fail to agree with openly gay Orthodox Rabbi Steve Greenberg who offers a scholarly but liberal interpretation of the Torah. He argues that religion has always adapted to changing times: “The demonstration that human beings can influence even God is all over the Torah. It’s not Judaism if it’s not responsive to the human condition”.

However, neither are the Rabbis willing to condemn or criticize – they are following traditions and beliefs thousands of years old dictated by the Torah and the Talmud, which they believe to be immutable. It’s this essential conflict that Trembling Before G-d doesn’t address – how can one believe when your very being is negated by those beliefs? The film focuses instead on the need of its gay and lesbian subjects not to be excluded from a community woven so tightly around religion.

The wide range of people and place in the first half of the film – we leave the medieval ‘cures’ endured by one Modern Orthodox American, David, to then encounter the closeted ‘Devorah’ who lives in Jerusalem and is just biding her time until the youngest of her 12 children grows up – causes it to lack somewhat in dramatic momentum. The impasse of the many individuals’ stories creates a frustrated circularity within the narrative. The second half of the film gathers focus when it spends more time with the subjects, departs from staged to-camera interviews, and wanders more into vérité footage.

The connections and exclusions felt by the gay and lesbian subjects are then brought into the moment. Israel, a New Yorker who has been estranged from his father for decades, finally talks to him on the phone. His 98 year-old father’s offhandedness – he is too busy to meet and talk for long – is a seeming non-event within which Israel’s whole struggle is held.

Israel leads jaunty ‘Big Gnish Tours’ of Jewish local community sites and landmarks in a New York precinct. On one of these tours, the street’s sirens go off like in a bombing raid – it is time for Orthodox Jews to go home to light candles for Shabat. The streets are deserted except for Israel and a young man who wanders by and asks, “What kind of film is this?” Israel initially discourages his interest but they get talking. Why aren’t you at home with your family? Israel asks the young Hasidic man who shrugs. “I don’t have to belong to anyone,” he says. It’s that choice which is denied the people of Trembling Before G-d and the film is a poignant exploration of faith, belonging, and exile.