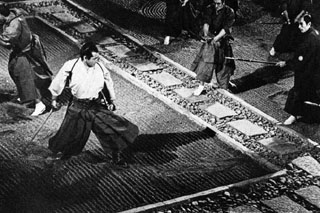 Masaki Kobayashi is one of Japan’s most outstanding post-war humanist filmmakers. A contemporary of Akira Kurosawa and Kon Ichikawa, Kobayashi’s personal experience of the Second World War has marked his pictures with a deep concern for social justice. This is well illustrated by two of his most well known films, the epic WW II trilogy The Human Condition (Ningen no Joken, 1959-61) and the period drama Harakiri (Seppuku, 1962). The anti-feudal critique expressed in Harakiri is reiterated in Kobayashi’s 1967 samurai film Rebellion (Joiuchi).

By 1967 production of the samurai genre was reaching the end of a cycle that began at the end of WW II. At the conclusion of the war, the occupation “brought with it a severe control of the film industry hardly varying in degree of censorship from the war-time Information Ministry.” (1) The jidai geki (period film), including the samurai film, was effectively banned by SCAP (Supreme Command of the Allied Powers) because it was considered to be anti-democratic. According to David Desser, “SCAP prohibited, for instance, films ‘favoring or approving feudal loyalty [and] direct or indirect approval of suicide.’” (2) The jidai geki enjoyed a renaissance following the success of Rashomon (Akira Kurosawa, 1950), reaching a peak in the early 1960s. By the time that Rebellion entered production the genre had entered a period of decline, which would largely see it disappear by the 1980s. (3) It was perhaps because of the genre’s ailing fortunes, that when he arrived at TOHO Studios Kobayashi found them unwilling to fully finance any future projects. Fortunately, Mifune Productions, the company started by Rebellion‘s star, Tôshiro Mifune, was able to make up the shortfall in production costs. (4)

David Desser positions Rebellion as an Anti-Feudal Drama. This post-war sub-genre of the samurai film has a pre-war antecedent, the ‘rebellion’ sub-genre that flourished in the 1920s. As Lisa Spalding writes:

Contemporary audiences undoubtedly sympathized with an innocent victim of poverty and corruption who rises to heroic proportions through his defiant yet futile rebellion. Yet it is the very futility of the hero’s rebellion that points to the ideological limitations of the period film genre. It was not capable of offering alternatives to feudal values: it could only refute them in an ambiguous manner. (5)

These ‘rebellion’ genre films seem to represent a reactionary response to feudal values. In contrast to this, Rebellion is not reactionary; instead Kobayashi gives us, as in Harakiri, both an analysis and critique of the values of feudal society. He examines the intolerable burden placed upon the individual within that society.

Rebellion is set in the 18th century, midway through the Tokugawa era (1600-1868). The plot hinges on a refusal. A vassal, Isaburo Sasahara (Tôshiro Mifune) refuses to submit to his lord’s demand that Ichi (Yôko Tsukasa), the lord’s former mistress and mother of the heir, be returned to the castle. Two years before Sasahara had been ordered that for the sake of the clan he must accept Ichi as a bride for his eldest son Yogoro (Go Kato). Unhappy at this situation, he was ultimately forced to endure it. He couldn’t know then how happy Yogoro and Ichi would be. When the demand comes to return Ichi to the castle Sasahara is outraged and supports Yogoro and Ichi in their refusal. The system has demanded too much of them on this occasion. However, Ichi is kidnapped and returned to the castle against her will. Although Ichi has been returned the Sasahara’s still must be seen to have done the proper thing. Instead, they demand her return from the castle. Attempts at a diplomatic solution fail and Isaburo and Yogoro prepare for battle. As Stuart Galbraith puts it, Sasahara is “not a samurai seeking vengeance really, he simply refuses to bend any further.” (6) As for Sasahara he is stimulated by his stand against the system. When everything appears to be at its worst he can say, “for the first time in my life I feel really alive.”

Some critics at the time accused Rebellion of being too slow and overly talky, even having a tendency towards soap opera. (7) Perhaps it is true that Rebellion is not truly representative of the samurai genre. This is not really a film after the fashion of the ‘rebellion’ genre in which sword fighting and action take a higher priority. Ideas are what are at stake here. Tension slowly gathers momentum in Rebellion. The story is told using a range of techniques including one extraordinary flashback sequence. In a montage composed of a series of rapid cuts, stills and freezes on action, Kobayashi illustrates the scandal that led to Lady Ichi’s removal from the castle. There is no dialogue or diegetic sound only the judicious use of Toru Takemitsu’s music underscoring the action. Kobayashi had nothing but praise for Takemitsu and his capacity to add depth to the image:

The movies I made before I worked with Takemitsu are so full of music. The flow of music tended to become monotonous. But Takemitsu uses music to slash the monotony. The way he places the music catches viewers by surprise and makes the director feel, ‘How extraordinary! He really brought that scene to life!’ (8)

Takemitsu’s music is only one facet of what is a very arresting film. As Kobayashi suggests, that music provides a perfect counterpoint to Kazuo Yamada’s beautiful black and white cinematography.

The filmic qualities of Rebellion are striking but it is the performance of Toshirô Mifune that is at the heart of this film. Mifune has a compelling screen presence and is able to effectively navigate the many shifts, from loyal retainer to hen pecked husband, proud father and devoted friend. He also imbues Sasahara with a kind of grim determination that makes believable the final transition from loyal retainer to outraged father. Added to this there is a sadness to Sasahara’s stand that is highlighted by the inevitable clash with his friend Tatewaki (Tatsuya Nakadai).

David Desser alerts us to the paradox at work in most samurai films. Owing to their historic specificity, “the focus of attention [is] on warriors in a time of relative peace.” (9) In Rebellion we are made acutely aware of this through the portrayal of Isaburo Sasahara and his milieu. As a samurai Sasahara is born into an inescapable network of obligations. Bound by these obligations, personal choice has a low priority. The feudal system is weighted against the individual in favour of society. Sasahara is a warrior with no war to fight, a peerless swordsman whose skill can only be employed in practice or in testing new swords on straw dummies. As such he is impotent but by crossing the line between obligation and personal desire he risks losing everything to assert his humanity.