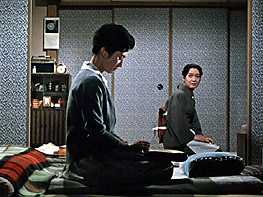 Pictures with obvious plots bore me now. Naturally a film must have some kind of structure or else it’s not a film, but I feel that a picture isn’t good if it has too much drama (1).

As Kathe Geist has suggested, critics have made rather too much of such statements by Ozu. Or rather their reading of such pronouncements has often been partial, failing to perceive the full implications of what the director was suggesting. Too commonly, the lack of “drama” he refers to above has been seen as an absence of narrative drive itself. Like Geist, I would suggest that Ozu’s films abound with plot information and incident, but that their emphasis on specific details marks them as unusual, even strange. Despite its lack of conventionally heightened moments of conflict, emotion and visual “disturbance”, it would be wrong to say that a late Ozu work such as Late Autumn (his third last film) does not contain scenes in which characters argue or express emotion; however, these scenes, images and moments are not given undue precedence.

For example, towards the end of Late Autumn, Akiko (Setsuko Hara), a widowed mother, is shown responding to the events of the narrative that have conspired to place her alone in her apartment after the marriage of her daughter. As in many scenes from Ozu films – such as the directly corresponding moment featuring Hara in Late Autumn‘s “sister” film, Late Spring (1949) – the transition from one expression or state to another is not shown. The space and time of this movement is elided or, rather, filled-in by a shot of some separate but contiguous detail from the room or environment the character occupies. This partly emerges from Ozu’s wish to de-dramatise his narrative, to place the expressions, emotions and situations of his characters within the timely but timeless ebb-and-flow of everyday life. But as Gilles Deleuze has suggested, such moments are also expressions of pure contemplation and temporality; as an audience we experience them less as transitions than moments of pure time, slices of contextual observation that stand in for the passage between two images (2). Ultimately, we are partially uncertain how to regard and read Akiko’s expression: is she smiling or crying, happy or sad? And can this movement from the masklike stoicism of the first image to the trembling smile of the second be “contained” in the beautifully composed interior composition that serves as punctuation between the two?

Another way in which Ozu de-dramatises his narratives and creates a kind of equality or evenness of scenes and moments is through the actions and events his films elide. For example, the important discussions between Akiko and one of her late husband’s friends – in which they are supposed to discuss her possible remarriage – are only recounted, leisurely and movingly, after the fact. Similarly, characters discuss going to the movies, but we never venture with them into such visually disruptive places as the cinema. A more self-conscious and playful instance of this occurs in Late Spring. Characters discuss going to a modern art exhibition, and we follow them to a sign outside of it that leads the way. The film then cuts to a scene of the couple discussing the exhibition in a restaurant, avoiding both the visual abstraction of the paintings (some would argue that Ozu’s films are abstract enough in themselves) and the immediate, possibly intuitive or unguarded response of the characters. This approach to the rhythms of the narrative contributes to what many see as the contemplative nature of Ozu’s cinema where characters are shown in repose, reflecting on the events of their lives. But it also highlights the common subject matter of many of the director’s works, reflected in the fluctuations and small-scale variations intimated by many of the later films’ English-language titles: Late Spring (1949), Early Autumn/The End of Summer (1961), Early Spring (1956), Early Summer (1951), An Autumn Afternoon (1962) and Late Autumn (1960). Most conventional films are uninterested in those moments that just show characters engaged in the everyday activities of life; eating, conversing in small talk, walking across a room. But in Ozu’s films these details are given as much weight as those moments which push the more conventional, dramatic components of the narrative along. The shots that punctuate the films – of countryside, urban streetscapes, juxtapositions of shape and colour, for instance – emphasise the interconnectedness and equal weight of all these moments.

Ozu is most concerned with generating a particular rhythm and tempo, with giving weight or accent to particular movements. The soundtracks of his films tell us much about this preoccupation. We often hear things gently clanging, lapping or chugging in the “background” of Ozu’s soundscapes. These elements – heard particularly instructively at the beginning and ending of Late Autumn – create a gentle rhythm that is intimately related to the overall tempo of the film. The repetition and variation of these sounds – and their rhythmic correlations with the visual field, particularly in shots emphasising reflections of water or foliage moving in the breeze – heightens the experiential awareness of life cycles and seasonal change communicated by the film. Although they may seem conservative, even out-of-date in many of their social and cultural values, Ozu’s characters routinely exude an exquisite sense of resignation and acceptance that is intimately related to the overall rhythm and pace of the films they appear in. The more things change in Ozu’s world, the more they stay the same.

The emotional and visual emphasis of the sequence from Late Spring discussed earlier allows a useful comparison with the more operatic and emotionally demonstrative world of the Hollywood melodrama. This comparison is prompted in part by the plot similarities between Late Autumn – a typical Ozu film in many respects – and Douglas Sirk’s All That Heaven Allows (1955). The two films document similar conflicts between the generations, but the differences in temperament and denouement speak volumes for the different sensibilities of the two directors and the worlds they represent. Sirk’s films are particularly iconoclastic in their view of the younger generation: more concerned with appearances and status they are by far the most conservative and venal characters in the film. All That Heaven Allows relentlessly shows the self-sacrifice of the mother for her horribly priggish and self-serving children. The world of mothers and children is much more contiguous in Late Autumn. Despite older characters discussing the difference between the younger generation and their own, and Ozu’s characteristic notation of some aspects – including dress sense and cultural taste – of modernisation and Americanisation, the film’s emphasis on the endless cycle of life draws the characters closer together, highlighting shared values and physical resemblances across generations rather than differences.

Thus Ozu’s characters exist as marginally varied individuals emerging from the same cultural context: it is not so much that they are more fully rounded, or even believable, than Sirk’s, but that they are not so clearly demarcated and typed. For example, the men who attempt to arrange for Akiko’s remarriage are all individuated but also share many similarities of gesture and expression. It is this emphasis on gesture, repeated or ritualised actions, and the relation of characters to their environment that defines this and many other Ozu films. Sirk’s characters are either entombed or emboldened by their environments and the objects that surround them, while Ozu’s are unimaginable outside of them, totally integrated into these comfortable, hieroglyphic worlds. In Todd Haynes’ oddly frigid but deeply Sirkian Far From Heaven (2002), the central female character visits a modern art exhibition and is challenged, existentially, by the abstract, somewhat non-representational world she confronts in the canvasses. We almost never see such disruptive moments in Ozu’s films, though we ourselves may be challenged by the ways in which they represent time, space and story.

When watching Ozu’s late, exquisite colour films I am often reminded of the work of Jacques Tati. Although I think that it is important that we acknowledge the cultural specificity of both filmmakers – and Ozu’s films are definitely concerned with an idealised vision of traditional family life persisting within the increasing turmoil of Japanese society – they do have aesthetic and tempermental similarities. An obvious link between the two directors lies in their representation of space. Although neither artist’s films are truly disorientating – their subjects are too quotidian, their emphasis on gesture and common experience too concentrated – they do contradict and self-consciously play with many of the conventions of classical style. Thus, for example, it is common for Ozu to eschew shot/reverse-shot patterns, over-the-shoulder compositions and conventional establishing shots – for example, the opening shots of Floating Weeds (1959) move gradually backwards into the space where the first exchange between characters occurs. Instead, Ozu draws on the full dimensions of 360° space and the possibilities of careful, almost abstract composition outside of the rigid requirements of strict continuity.

Ozu’s actual methods in composing scenes are fascinating in this regard, substantiating our intuitive sense that each image, although part of a continuum, is “full” in itself, a perfect composition that does not need to proceed into further action (though it is an image we experience in time and not a still-life). For each individual set-up Ozu would completely recompose the image, less concerned with eyeline matches and other questions of continuity (Ozu’s characters often look disorientatingly straight into the camera rather than off-frame) than with the compositional qualities of balance and volume. Similarly, Tati’s films are more concerned with the limits of the frame, the colour combination of the composition, and how the image draws the eye (and body) of the spectator than with anything else. Ultimately, Tati and Ozu share an attitude towards the spectator and the world that distances emotionally and involves experientially. Ironically, this experiential emphasis, insisting on audience involvement with the processes of perception, has a greater cumulative and emotional impact than more histrionic dramas. In the end, it is not that Ozu and Tati fully de-dramatise their narratives; rather they allow moments of drama to blend with the currents of everyday existence. They offer highly composed and stylised worlds far removed from our own, which nevertheless allow us to see, hear and feel afresh the phenomenological universe that surrounds us.