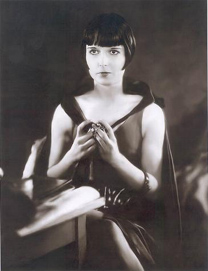 Howard Hawks’ fifth film, A Girl in Every Port, is important for at least two reasons: because it began the task of establishing Hawks as an auteur and helped create the mystique of Louise Brooks.

If there is a moment when Hawks was first recognized as a distinctive filmmaker it could be in Jean-George Auriol’s review of the film in the December 1928 issue of La Revue du Cinéma. Auriol asserted that Hawks’ films had these traits: “his simplifying style, the way he composes films through violent cuts, the astonishing seductiveness of his images.” (1) Over 70 years later, we can seize on Auriol’s recognition of Hawks’ “simplifying style” as most predictive of the Cahiers du Cinéma‘s elevation of Hawks as a preeminent auteur in the 1950s, as well as Hawks’ own reiteration in interviews in the 1960s and 1970s of his pride in a style that doesn’t call attention to itself (such as the predominance of the eye-level camera). More to the point, however, are the essential thematics present in this film which were to be worked out, and recycled in endless variations, in virtually all of Hawks’ films from 1928 onwards: male friendship-through-rivalry; male community centered on the ethics of professionalism; the emphasis on extroverted behavior (‘fun’) and the suspicion of melancholy or even meditative introspection; the integrity of physical action (to include violence) and distrust of cerebral resolution; the threat posed by women unless they are integrated into a male community on masculinist terms; and the avoidance of commitment to domesticity or conventional family structure.

However crudely expressed at this formative stage of Hawks’ career, all these thematics are present in A Girl in Every Port. Pretty depthless, standard-issue lusty, horny-handed sailors who roam the world in a typically Hawksian loose, episodic narrative, Bill and Spike have an emotional (and even physical) attachment to each other which is far greater than it is to any woman. As Bill’s intertitle puts it (as he puts down a woman), “That big ox means more to me than any woman.” Half a decade away from the enforcement of the Production Code, this film raises the sublimation of male-male desire close to the surface in the ritual finger-jerking that expresses Spike’s and Bill’s buddy love. The generally blunt, and frequently jokey, representation of sex certainly gives the film a refreshing quality that is far removed from the Victorian moralizing of Griffith and DeMille. But the film’s modernity is probably most attributable to Louise Brooks’ presence.

In her book Lulu in Hollywood, Brooks writes that it was this performance that prompted German director G.W. Pabst to cast her in Pandora’s Box (1928). What would Pabst have seen in her in this film to inspire him? Considering that A Girl in Every Port is not a star vehicle for her (even though it was her twelfth film), that it gives her prominence in only the last third of its length, and that Hawks constructs Marie as an unredeemed trickster figure who traumatically disrupts the male dyad, it is also clear that Hawks presents Brooks as an alluring cinematic vision. She’s an American proto-Lulu. She even works in a carnival. In a 1960s interview with Kevin Brownlow, Hawks said he “wanted a different type of girl…. I hired [her] because she’s very sure of herself, she’s very analytical, she’s very feminine, but she’s damn good and sure she’s going to do what she wants to do.” (2) In retrospect, he reconstructs her as a prototypical, sexually ‘forward’ Hawksian woman, yet at the early stage of his career, his characterization of Marie (aka Mademoiselle Godiva) is less the ‘female buddy’ than conventional gold-digger.

Laura Mulvey makes a good case for Marie as something more complex than a mere femme fatale, but the fact remains that, unlike numerous, later Hawksian women like Feathers in Rio Bravo (1959) or Nikki in The Thing (from another World) (1951, accredited to Christian Nyby), Marie is never permitted integration into the male community of professional friends/rivals. (3) She is privileged with more narrative attention than the succession of ‘native girls’ in the previous episodes, and she is certainly as playful as those two later female characters, but the film concludes with her as a pariah figure who, far from enabling male community to cohere, instead threatens at all times to destroy it. Tellingly, the penultimate shot of Brooks composes her as a shadow, a reduction of her form to rejected outline, while Bill leaves her, opening the door to his (literal) enlightenment. And the very last shot of Marie emphasizes that she must remain a solitary figure, unredeemed by the mise en scène which has fetishized her sexual allure to an overwhelming degree.

Yet almost in spite of Hawks’ recollection of his intentions, A Girl in Every Port sets in motion Brooks’ naissance as Lulu, the recognizably modern ‘girlish’ destroyer of men who are more obsessed with her than she is with them, an indissoluble mixture of innocence and corruption. Certain close-ups and medium shots prefigure the shots in Pandora’s Box where Brooks’ contempt for men either doesn’t seem like ‘acting’ or transcends acting into something closer to ‘being’. These shots highlight a performance that strikes a chord in contemporary audiences who otherwise, and usually correctly, dismiss much silent film acting as archaic and melodramatic (McLaglen’s convulsive tears stand in stark contrast to Brooks’ sly, cool, knowing glances). O’Connell’s luminous cinematography crystallizes her beauty, which goes far beyond Hawks’ offhanded description in the Brownlow interview of her as ‘good-looking.’ While Brooks is marginalized narratively by Hawks, she has the power to overcome her subordination through the sheer force of her persona, a mystique that Pabst undoubtedly recognized and desired to place at the center of his richly complex study of male obsession and destruction.