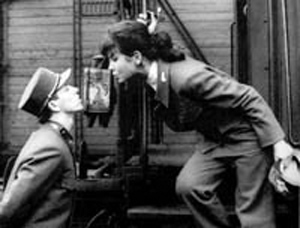 Jirí Menzel’s debut film was based on a freshly published novel by his countryman Bohumil Hrabal, who also collaborated on the script adaptation. The film came at a heady time when the Czech New Wave was attracting much attention, not least at international festivals. Closely Observed Trains itself won an Oscar for best foreign film. Beyond Menzel, the name to survive is Milos Forman, whose The Fireman’s Ball (1968) was very much of a piece with the film under discussion, and who then of course went on to great success in Hollywood with One Flew over the Cuckoo’s Nest (1975) and Amadeus (1984). But headier still was the progressive liberalization in most areas of culture, and indeed in Czech public life in this period. This all changed with the suppression of the Prague Spring in 1968 (events reworked in Margarethe von Trotta’s The Promise [1994]).

Seemingly belying its title, the film’s setting is a backwater station which trains nearly always skip as a stop. But gradually the real sense of this title becomes clear, referring to the German trains that were given priority passage through occupied Czechoslovakia to carry munitions and troops during World War II. And finally that meaning is in turn subverted: the last train is indeed closely guarded, leading to the death of the central figure, but not before his own close surveillance is rewarded. Given his own family background, the heroism behind his act grows from what seems an unlikely base (right down to his grandfather who tried to stave off the German advance by hypnotizing a tank, which promptly flattened him). We see only lovable but bumbling Czech provincials in the film, who seem to have worked out a private arrangement of holding the War at a comfortable distance; old-world, charming people who are ultimately rather self-indulgent. But all this proves illusory, and we’re left with an unexpected act of heroism, which largely occurs off-screen. There is no Hollywood foregrounding of the individual here; instead the after-effects of the explosions resonate across the screen and through our own historical consciousness – this is what it took to disable the closely watched trains and the whole system that relied on them running on time.

Throughout the film an equation operates between sexual and political liberation (this is the converse of the markers attaching to sexual decadence in post-war Italian films). Czech sensuality is counterpointed against Nazi repression; the former finally triumphs, though with ‘le petit mort’ having been literally, lastingly realized. Despite the film’s understated imagery and its restrained tone – Hrabal’s novel features far more pointed anti-German comments – death has been a prevailing motif, from the corpses seen on one train, to Milos’ attempted suicide (in what seems to be a particularly Eastern European mode of action, reminiscent of Tomek in Kieslowski’s Short film about Love [1986], and the ending of Mikhalkov’s Burnt by the Sun [1994]). Destruction too has been prefigured, in the sudden bombing of the photographic studio in Prague. Nonetheless, set against the little intrigues and petty destinies of the bulk of the film, Milos’ death is a shock, revisiting an earlier sense of a lifestyle bumbling on indefinitely without major irruptions or dramatic turning points.

The strongest satire is directed not at the Germans, but at the absurdity of Nazism’s local adherents, as when their main local representative explains German military maneuvers at a time when the real War is unwinnable. Earlier in the film this same figure arrives in a rail car and is forced to make his own strategic retreat along the single track, all this to chords from Liszt’s Les Préludes, the signature tune used to accompany German radio news of victories on the Eastern front. The equation of sex and politics is cemented when this same tune mock-heroically accompanies Milos’ victory over his premature ejaculation. Altogether the film is an ideal example of the interplay between history at a personal level with the larger historical framework: Milos’ sexual breakthrough riskily parallels his political maturity, and mirrors that of his nation, it would seem. It is certainly difficult for us not to read the film’s subtext as referring to the Soviet occupation of Czechoslovakia in the filmmaker’s ‘present,’ not just that of the Nazis in the film’s actual setting near the end of WWII. After Milos’ suicide attempt the camera picks out a poster, no doubt mounted by the local quislings, which defiantly proclaims the Soviets will never get Prague in their clutches.

The historical sweep implied by the film is suggested, but never documented, by its low key approach. Freshness of characterization is matched by turning the miniature mise en scène and drama into microcosms of struggles on the world stage. Behind the visuals there is a magical world of wonderful tinklings, of flashing lights and seemingly self-generating signals, all reflecting the operation of the railroad, before their full significance is revealed. A further recurring sound effect is the lovely old clock, a vestige of bygone Hapsburg glory, which at the end almost operates as a metronome to the explosions, having bided its historical time. Just like the underground patriotism of the Czech people, in this strikingly understated film with its bitter-sweet humour, its earthy imagery, and its unassuming heroism.