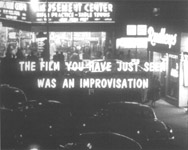 The Columbo episode was credited to Nicholas Colosanto, a real director (and actor – he played Tommy Como in Raging Bull) who was supposed to direct, but was taken ill: Cassavetes and Peter Falk decided to co-direct the episode, so long as the credit (and director’s fee) went to their friend Nick. This has given rise to the ‘rumour’ that ‘Nick Colosanto’ is a pseudonym for Cassavetes, and that anything credited to Colosanto (such as an episode of Shaft in 1973 and the other Columbo episodes) is really Cassavetes’ work. However, this is incorrect.

The Debbie Harry concert film has never been released, but clips from it can be found in certain documentaries about Blondie.