The strength of the biennial conference of the Film and History Association of Australia and New Zealand (and why it remains a must on many people’s calendar) is the depth and breath of its participants and attendees. The joining together, within a spirit of genuine respect, of screen practitioners, industry insiders, historians, archivists and of course cinema and cultural studies academics provides those who attend with a unique opportunity to rigorously examine the continuing role of film and its relationship to history in all its various guises. 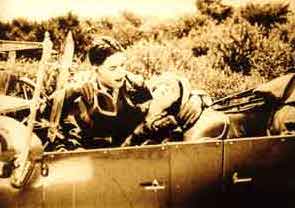 The ambiguously inclusive theme of the 14th conference held in late November 2008 at the University of Otago in Dunedin, New Zealand, was “Re-mapping Cinema, Re-making History”. However it ought to be noted few presenters fully embraced the ambitious radicalness implied within the invitation. Amongst the exceptions was the impressive keynote by Noa Steimatsky of the University of Chicago. In a beautiful and intricate piece of research tracking the use of the famous Roman Cinecittà film studios as a refugee camp during 1945-50, Steimatsky alerted us to the need for a re-think and re-conceputalisation of the accepted narrative surrounding the birth of Italian neo-realist cinema. She suggests the “pervasive repression” amongst the film industry, the public and historians about why the neo-realist filmmakers were unable to confront the reality of the camp can be linked to notions of the “psycho-geography” of Italy in the immediate post-war period. As Steimatsky promised in her abstract, she painted a picture of the Cinecittà camp “as a ‘placeless place’, an obverse reflection of the phantasmic entity which is the movie studio itself: a city of dreams now turned inside out to support quite literally the elemental reconstruction of life in that era.”

The other keynote speaker was the affable Hamid Naficy from Northwestern University in Chicago. In exploring what he describes as a resurgence of a new “global” mainstream cinema, Naficy “re-turned” to and “re-worked” his work on transnational cinema of the 1990s. Naficy appeared to be arguing for an extension of his original definitions to include a cinema he now describes as “multiplex”. Operating both at textual and technological levels this cinema contains multiple dialogues, is made by “accented” filmmakers and utilises alternative production models employing multi-national crews. As with his definition of transnational cinema the central themes of this new “post-diasporic” and “post-Internet” cinema remain those of displacement and exile within an aesthetic of loss.

I made it to most plenary sessions and found the ones provided by historian Barbara Brookes of host University of Otago and Chon Noriega from UCLA of particular interest. Brookes suggested it would be more useful and historically accurate to place the 1952 New Zealand film Broken Barrier (d. John O’Shea), which depicts an interracial romance between a Maori woman and Pakeha man, within the global cinema trends of the time, namely Hollywood, rather than the largely nationalist readings it has tended to attract to date. Whereas Noriega examined the structured absence from the canon, and in particular the “archive”, of the work of avant-garde Latino artists Raphael Ortiz and the conceptual art group, Asco. He asks how might these and other Latino artists be recovered and incorporated into historiography? Other delegates also reported Paul Clark’s outline on how a more rounded (even alternative) reading of the Chinese Cultural Revolution can be made by thoroughly examining both the film culture of the period (1966-76) and films of, and about, the period, was insightful.

Other sessions that cornered my attention included one centred on rural cinema histories. Dylan Walker and Stephanie Hanson were all able to convey the uniqueness of regional cinematic experiences during 1930s-40s in the Eyre Peninsula of South Australia and South Coast of New South Wales and architect Ross Thorne reminded us that the experience of cinema going cannot be separated from the places they are shown and that this aspect of cinema history continues to lack adequate recognition. In the session on amateur film Stephanie Boyle (Australian War Memorial) was able to provide us with rare insight into their collection of 8mm “soldier” films. These films are largely donated by the soldiers’ families and of the 5000 titles the memorial has only identified four women filmmakers. This contrasted nicely with Kathy Duddling’s (New Zealand Film Archive) presentation on early women’s amateur films and the excellent work that is being done on collecting, preserving and contextualising these collections. One of the most controversial sessions was presented by Richard Maltby, Mike Walsh and Deb Verhoeven. Titled “Rethinking Cinema History” they critiqued current cinema studies curricula and vigorously argued for a significant place for notions of audience and audience research in the field. Maltby ended his presentation advocating for a new film studies curriculum that includes geography, economics, space and history where issues of distribution, exhibition and audiences are central.

Perhaps unavoidably at a film conference held in the land of the long white cloud there were numerous mentions of Jane Campion and her omniscience emerged as a running joke fuelled almost exclusively by those who have published books on her work. Of the associated screening schedule the 1928 silent A Daughter of Dunedin (d. Rudall Hayward) in the magnificent Regent Theatre was a real treat. The compelling and surprisingly risqué film was the local version of a travelling “community comedy” whereby entrepreneurial roving producers would shoot a film utilising stock scripts, making sure to capture the town’s main attractions and using as many of its citizens as possible as featured players and extras.

Overall I would say the conference suffered from the tyranny of distance. There were many holes and last minute program changes as a result of late scratchings, one of whom, disappointingly, was plenary Maureen Turim. Other than two local New Zealand academics, all keynote and plenary speakers heralded from the United States – perhaps understandable given the numbers of US trained academics employed in New Zealand universities. As with any conference of this size it is impossible for one person to access all of the theoretical threads and debates but given my privileged status of not having to give a paper I was able to sample from many, providing me with a solid snapshot of the state of the study of contemporary film history. The 2010 conference will be held at the University of New South Wales.

The conference awards for excellence in film and history publishing and research are as follows; Best Monograph went to Ina Bertrand and Bill Routt for their book The Picture That Will Live Forever: The Story of the Kelly Gang (Australian Teachers of Media, 2007). Best Essay/Book Chapter/Refereed Journal Article was awarded to Simon Sigley for “How ‘The Road to Life’ (1931) Became the Road to Ruin: the case of the Wellington Film Society in 1933”, published in New Zealand Journal of History (Vol 41, No. 2, 2008). The Joan Long award was given to Alec Morgan for his work as director and writer for the film Hunt Angels, and finally the Jonathon Dennis Achievement Award was given to Bruce Babington for his work as author of the book A History of New Zealand Feature Fiction Film.