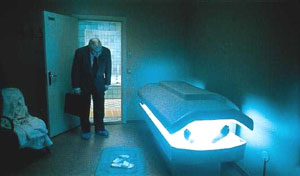 The Rotterdam International Film Festival 2001, which ran from 24 January to 2 February, celebrated its 30th birthday with a mammoth 502 films in 10 days. In the Rotterdam tradition, it was the passion and dedication rather than ambition of filmmakers that was honoured.

Among others were the programs the ‘VPRO Tiger Awards Competition’ for new releases; ‘Focus on 3 Filmmakers’ (Roy Andersson, Kamal Haasan and Anne-Marie Miéville); and ‘Ex~Voto’, experimental shorts by filmmakers such as Jan Svankmajer, Jean-Luc Godard and Stan Brakhage. A major part of the catalogue was taken up with ‘On The Waterfront’, inspired by Rotterdam’s status as a major port. Recent releases such as Robert Guèdiguian’s La Ville est tranquille (The Town is Quiet, 2000) and Julian Schnabel’s exploration of Cuban poet, Reinaldo Arenas’ life in Before Night Falls (2000) screened with classics such as On The Waterfront (Elia Kazan, 1954), Querelle (Rainer Werner Fassbinder, 1982) and The Docks of New York (Josef Von Sternberg, 1928). The Festival also commissioned ten filmmakers, including Jem Cohen (New York, 2001), for video diaries of harbour cities.

From the Main Features Programme:

A baby is born in a maternity ward. The parents-in-law knock on the small window and ask the nurse ‘Is it a boy?’, ‘No, it’s a girl’ but the family won’t believe it. They return to the window and ask the same question again. From that moment on we know that the fate of the baby girl and her mother is sealed. As we circle the city from story to story, woman to woman (three women are on parole from prison, a mother is forced to abandon her child), Panahi allows the knowledge of the women’s entrapment to gently and irrevocably settle. We enter night and the mantle of oppression becomes tighter until our three main protagonists return to their prison, unable to exist in the outside world. Panahi, director of The White Balloon (1995), employs a cinema vérité style, deceptively casual, to effectively portray a world of surreal restriction.

In La Captive Akerman returns to the theme of obsession. Inspired by Marcel Proust’s short story La Prisonnière, Akerman fashions a spare and haunting tale around the obsessive love the young Simon feels for the affectionate but remote Ariane. The two lovers share a dispositif phantasmogoric where the roles of captive and captor become indistinguishable. If the pursuit of Simon is unrelenting then the eventual ‘As you like’ rejoinders of Ariane take on the maddening barb of Bette Davis in Of Human Bondage (John Cromwell, 1934) who uses the same phrase of indifference to inspire obsession and pain. What gives the theme of obsession an extra dimension is Simon’s questing to discover what it is in a lesbian relationship that surpasses the intimacy of a heterosexual one. It is the very elusiveness of Ariane’s love for women that is torturing for Simon, but also perhaps the nexus of his attraction for her. An elegant and classical film for those who love their French films straight up – the characters’ precious sensibilities are bound to wear thin on more robust natures. 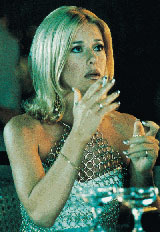 Shirley Barrett mines the same vein that produced her first feature Love Serenade (1996). This time the setting is the Gold Coast, a perfect moral vacuum for a satire on New Age motivational pop psychology. Security guard Joe Grasso (Salvatore Coco), self-proclaimed maker of others’ dreams, transforms himself into a showbiz agent with the aid of his wheelchair bound girlfriend’s (Sacha Horler) compensation money. Whereas the vulnerability of Miranda Otto’s character in Love Serenade provided the counterbalancing pathos for the tackiness and charlatan ways of the DJ, Walk the Talk flounders on Joe’s intentions – charlatan or innocent? – and the predictability of the objects of satire.

Unger has created an exuberant and confident debut feature with this story about two small town Austrian chicks, Lilly and Betty, obsessed with an Elvis impersonator (whose TV show sells kitchen appliances) and all things Americana. When ‘Elvis’ comes to Ternitz it’s as if real life has arrived and the gutsy and scheming girls are determined to make their dreams come true – whether that’s a date with the King himself or a bigger bust size. It’s impossible not to be carried along with their chutzpah and vulnerabilities as Unger creates some riotously funny scenes in this bittersweet fairytale.

Mike Figgis appears to want to go one better then the now de rigueur Altmanesque style of parallel stories. Time Code tells the tale of four stories simultaneously, with a four-split screen. As the festival programme says, the stories were ‘shot in one take [!] and had to run in sync with each other…an intersecting DV experiment making clever use of the technical potential of the medium without gimmicks’. As the film unfolds with the usual LA tinsel town scenarios – a woman divulges on her shrink’s couch, another fucks an executive of an actor’s agency in her quest for an acting career, and a group of edgy execs at the same agency cast around for scripts and actors – our eyes adjust to flickering from square to square, directed by the rise and fall of the soundtracks. The film is interspersed with volcanic convulsions, perhaps to remind us that it’s LA, perhaps to give the improvising actors a cue to get onto the next part of the pre-planned story. Holly Hunter is the only actor able to layer her character with unexpected nuances, the others offering up the pulp of manufactured lives. Not even some hysterical fun in the climax could stop me from thinking that I was witnessing anything but a gimmick.

Roy Andersson has created a monumental tableau on the pain and absurdity of life with this film. The Swedish filmmaker has made only two features since his debut success, A Swedish Love Story in 1969, preferring to control every detail of his unscripted films. Chaos grips an unknown city as its inhabitants, their faces cloaked in clammy white paint, are submitted to strange and humiliating experiences: a magician slices into a man from the audience, a man endures a sacking, another sets fire to his shop as his son lingers in an asylum after writing too much poetry. The film shares the morose sensibilities renowned of Scandinavian cinema and the absurdist dark wit shared by such northern European artists as Austrian Gottffried Hellwein. Scenes such as the one where life size statues of Jesus on the Cross are thrown into a wasteland pile because a salesman has guessed wrongly on the popularity of Jesus at the end of the millennium leave an indelible impression. The tableau-like Songs of the Second Floor consists of 46 unedited scenes, only one with a moving camera; its craft should be seen by the likes of ‘gimmick free’ Mike Figgis. It won the Grand Prix du Jury at the Cannes Festival.

Tom Tykwer follows up the success of Run Lola Run (1998) with a romantic drama where chance and fate, usually in the way of disasters, have a deciding factor in our lives. At least that is how Sissi (Franka Potente of Run Lola Run) chooses to see her life with her relentless quest to join up with the man who saves her life. Tykwer has a striking filmic style that provokes the most visceral of reactions. It certainly isn’t often that I have the impulse to dry retch at a film scene that is also of certain beauty! While Potente holds the screen with her mute yearnings she is badly let down by the impassivity of her love object, Bodo (Benno Fürmann), and Tywker’s script ultimately fails to rise above the contrived and the melodramatic.

Edward Yang creates a leisurely (3 hours long) exploration of the search for understanding by the family members of an extended Taiwanese family in this film. Life begins to fall apart for father NJ Jian (Wu Nienjin) as his mother falls into a coma on the eve of his brother’s disastrous marriage. NJ Jian’s wife collapses under the weight of the realization of the smallness of her life and heads to the hills with some monks, his teenage daughter becomes entangled in ménage à trois of sorts and his small son becomes obsessed with taking photographs of the back of peoples heads in order to discover ‘the other side’ of what we see. NJ Jian must face his own crossroads with disillusionment at work and the return of a long lost love. It’s a period where he must wake every morning to face the same uncertainty and Yang takes us through this journey with delicately nuanced subtlety.

With thanks to the Press Officer, Rinke von Hell, at the Rotterdam International Film Festival for granting a press pass at the last moment and Siwan Anderson and Patrick Francois for their hospitality, film discussion and bicycle.