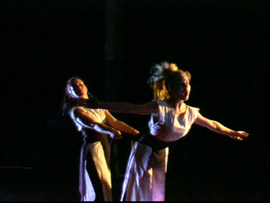 The St. Kilda Film Festival again provided a window (three sessions wide by 1.5 hours per session) in which to hang new works by both CD ROM creators and live performers. For those involved, or simply interested in, the sectors of CD ROM work and live performance, Fusion has proved an outlet for these less commercially savvy artforms.

It’s an odd mix though, and I am pained to know what glue the Festival uses to justify wedging these two artforms together. At my distant focus, it’s hard to see the blurred title ‘Fusion’ as a sufficient umbrella to shelter both CD ROMs and live performance in an even-handed relationship. My suspicion is that the mix derives from pragmatic concerns. Both are small artforms, demanding at least a token appearance to meet audience expectations of a festival being agreeable to fringe artist needs.

But if you take from the listing the caption ‘Multimedia Program’ – a broader term there perhaps hasn’t been since the ’60s spooned up ‘Happenings’ – you’re left with two artforms that at a dinner table would sit and have nothing to say all night.

Due to my uncertainty in comprehending the aesthetic ‘point’ of this mix, I have decided to review just the last of the three Fusion sessions, ‘Live Performance + Film’. (Of the two artforms, I am far more knowledgeable in performance culture than CD ROM works.) To review all three would be to succumb to a structure imposed by the Festival, one which I am not wholly sure about.

Last year Sue McCauley curated the Fusion program. This year – according to the program – she again curated it. The Credits on page 2 tell me this (“fusion curator Sue McCauley”); the program note on page 8 tells me Sue curated the CD Rom presentations, but it doesn’t mention anyone as curator for the performance component. As for the online program, the calendar mentions Fusion, but there’s no hyperlink to further information.

In spite of what the program clearly states, Sue McCauley did not curate the performance session. Someone called Michael Blaylock did. But his name appears nowhere in the program. Is this a simple Festival slip-up? Perhaps. More so, I think it is indicative of the Festival’s lack of effort toward the Fusion package in general. This oddball basket of artforms seems to constantly get tagged on the fringe – receiving an unclear write-up, poorly attributed.

But if I had to take another stab at why Michael Blaylock’s name is nowhere in sight, I’d guess it’s because the performance session was of such low standard and quality that no one would want to put their name to it. A shame because last year Sue McCauley really drew in some notable performance choreographers: Cazerine Barry (one of Melbourne’s most irreverent and innovative choreographers) and Tokyo-based 66b/cell, just to name two. I was therefore surprised to see the quality of this year’s line-up fail to live up to the 2000 program. The strength of my eagerness for good things was, it must be said, matched only by my great disappointment. I’m not sure how it happened, but the performance program felt more VCE-angsty than – like it did last year – politically charged.

Sydney-based Opera Somatica was invited to perform The First Law of Motion. There seems an inherent risk in translating Newtonian physics in a live arts space, and personally I felt this piece failed the transition. It suffered a stiff metaphoric composition too generalised to add valuable understanding, too specific to allow cognitive or emotive audience input. The piece was choreographed with the broadest of possible brushstrokes. Sweeping gestures created crude impressions of physical phenomena such as gravity, resistance and mass. As for the two performers, my impression was a performance in need of tightening. For a study of a ‘law of motion’, I watched awkward segues between scenes, gestures that ended like frayed knots, and limbs void of meaning.

The filmic components were at best unimaginative, at worst clumsy. An abrupt onscreen disturbance of colloquial chatter about boys and kissing attempted to steer Newton into an underage nightclub. Editing it into a rhythmic mix does not itself evoke a law of physics. It does performance art – all art – a strong disservice.

As for the interactions between film and performance, the tricks employed were poorly developed. Other choreographer dancers, notably Daniel Yeung from Hong Kong, Netherlands Dance Company III and Melbourne’s Cazerine Barry, have better explored uncharted territories where film intersects performance.

Next, Edmund Chiu presented a vivid piece entitled Lucid. This colourful collaboration of techno music, film and dance promised a more open agenda than the first piece, and for the first ten minutes lived up to that expectation. Until, though, they started hammering messages down the metaphoric jugular: onscreen and onstage battles waged between Grim Reaper figures and innocents; Rainbow flag imagery and pink triangles; then, in case we didn’t already ‘get it’, screen messages telling us it’s okay to be who we are.

This heavy hand of queer tolerance dealt – for me at least – a fatal blow to what became more literal than lucid. The smothering of obviousness is not easy going on an audience: heaven forbid they should be allowed to explore a piece for themselves. I certainly wasn’t.

Finally, collaborators Nadine Allen, Marty Damhuis and Dan Oreilly-Rowe presented Peripheral Vision. It was strictly an improved piece – a modern-day Happening perhaps – with one performer, a VJ (a DJ on camcorder) and a musician on vibraphone. For the piece, they constructed an elaborate set: plywood candy-coloured house, autumn tree and leaves, and various bits of deck furniture. The players seemed confident with their own devices, and familiar enough with each other’s creative energy, for the piece to hang together as it evolved. But the evolution occurred with too little interest to hold mine. Dullness ensued as the solo performer donned wig and martini, and decked herself out for show. Layered projections of her image appeared on a screen, but there was insufficient content in the material.

Had Peripheral Vision been used to open the session, I might have felt mildly inspired to stick it out. But this dangling thread on a poorly hung evening left me feeling limp and disappointed.

Fusion certainly keeps open a window for viewing fringe areas of film and performance, but I’m not sure it’s worth a peak. Given that other dance companies frequently use film in more innovative ways (take a look at Dance Works and Company in Space as but two examples), I ask: Is the St. Kilda Film Festival the right house for this window? Personally I doubt the Festival is positioned to give it a go.