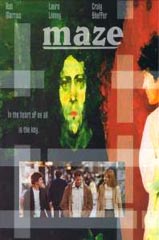 Quite apart from the movies it presented, the 4th annual Bermuda International Film Festival had one attraction no other such event can offer: Bermuda itself, a tiny speck in the mid-Atlantic bedecked with palm trees, rippling beaches, warm sun, cool breezes, and a mere 60,000 residents to share them with. I’d been here before on cinema-related business, reporting on The Deep, shot 25 years ago near the capitol city of Hamilton on locations above and below the water. The place appears to have changed little since then, apart from the advent of its filmfest and the modest boost this gives to the island’s similarly modest film culture.

Bermuda boasts a grand total of four cinema screens, which seems a tiny number until you compare it with statistics in the movie-rich United States, where there’s also about one screen per 15,000-20,000 people. The Festival took place primarily in the Liberty Theatre, hardly a fancy place but adequate to the occasion, especially since the screenings I attended (including the gala opening-night show) drew less than sell-out crowds.

Bermuda projection standards aren’t exactly top of the line-the operator in the booth sometimes had trouble getting the auditorium lights off before the picture started rolling-and the Festival should abandon this year’s official tee-shirt, which featured the acronym BIFF atop a hunky Schwarzenegger clone, more redolent of a health-club convention than a cultural affair. These were details, though, and the Festival proved well run in other respects.

Bermudians take pride in whatever celebrity connections they can boast of, and stars don’t come much brighter than Michael Douglas, who-as I was constantly reminded by my courteous hosts-has Bermuda family roots as well as current intentions of residing part of each year in his newly acquired mansion on the island. So it was no surprise to learn of the Festival’s opening-night offering: One Night at McCool’s (2001), the first project completed by Douglas’s new production company, Further Films, and featuring you-know-who wearing the most eye-insulting hairdo sported by a Hollywood luminary since Harrison Ford in Presumed Innocent.

Directed by a new filmmaker with the unfortunate name of Harald Zwart, this hyperactive comedy takes more than a few cues from the Pulp Fiction school of cinematic overdrive. Our heroine (Liv Tyler) is a vivacious vixen whose beauty bedazzles every romance-starved man who takes a look at her. Sadly for her, these gents turn out be a sorry lot: a good-looking drunk (Matt Dillon) whose house she and her loutish boyfriend decide to rob, an emotionally stunted attorney (Paul Reiser) who lusts after her, and a pudgy policeman (John Goodman) trying to crack a murder involving her and the loutish boyfriend.

Tyler steals this music-video-inspired show by displaying more high-spirited sensuality than the rest of the cast combined. She also manages to look sensational in every outfit the hard-working costume designer could whip up. Goodman comes in second-he’s a rare big-guy comedian who manages to capitalize on his weight without flaunting it every moment-and Dillon is his usual watchable self as the barfly who bumbles his way into Ms. Tyler’s heart.

Rob Morrow has been trying to broaden the scope of his career, and in keeping with this ambition he’s now made his directorial debut with Maze (2000), a comedy-drama that takes on more than it’s prepared to handle. Morrow also stars as the title character, an artist who’s afflicted with Tourette’s Syndrome and is therefore prone to involuntary patterns of speech and movement. (The witty documentary Twitch and Shout (Laurel Chiten, 1993), which included the real-life Maze among its subjects, is so far the definitive film treatment of this condition.) Maze becomes infatuated with a close friend’s lover, played by Laura Linney, whose portrayal of the small-town heroine in You Can Count on Me (Kenneth Lonergan, 2000) was one of last year’s most impressive performances.

She’s similarly appealing in Maze, but the movie never quite balances its humanitarian message (disabled people fall in love like everyone else) with its Hollywood-style romantic angles. Morrow’s screenwriting bears more of the blame for this than his acting does, and a subtler script might have solved the problem. It’s hard to disagree with a friend who left the Bermuda theater saying it could have been a nice little romantic comedy if not for all the distractions about Tourette’s, and conversely, a thoughtful treatment of that condition would have been fine without all the hokey scenes of our hero pitching convulsively tossed containers of wine and paint all over the women he wants to attract.

As an island nation, Bermuda recently started devoting part of its festival to films from other islands. This year Ireland had the special sidebar, which included a new biopic about James Joyce, arguably the quintessential Irish author of the 20th century.

But ultimately the film suffers from the common biopic problem of straining too hard for dramatic focus. It examines only one brief period in Joyce’s life-his early years as a struggling author, when he and Nora first get together-and reduces this to a series of standard-issue romantic episodes. It’s also superficial on a literary level, and its efforts to unite personal and artistic angles are regrettably weak. (When a scribbled Joyce manuscript makes its way to Nora’s eyes through happenstance, it just happens to be The Dead, one of his greatest short works. Why couldn’t it have been some deservedly forgotten story that Nora could rightly despise, acknowledging that even the greatest authors have their share of awful days?) Equally to the point, heartthrob Ewan McGregor is hardly the best actor to play Joyce, whose photos reveal that he remained a nerdy-looking guy no matter how hard he worked to cut a dashing Dublin figure. Nora contains a lot more motion-picture artifice than genuine Joycean complexity.

Art-film enthusiasts were more excited over Innocence (1999), by Australian director Paul Cox, whose laid-back style sometimes masks an adventurous approach to story material and narrative structure. His new picture looks tastefully at romance between an old married woman and a similarly old boyfriend who returns into her life after many years. Described at the Festival as a tale of “first love” between senior citizens, it’s a gentle and appealing drama.

Other items at the Festival comprised features like Dinner and a Movie (2001), newcomer Lisa Kors’s uneven comedy about a young woman (like Kors) making her first movie (like Kors) despite various obstacles, and numerous shorts, including By Courier (2000), actor Peter Riegert’s adaptation of a story by American writer O. Henry about a boy carrying messages between a quarreling couple. Like the Festival as a whole, Riegert’s directorial debut is modest but promising.