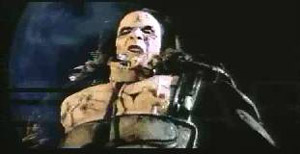 In a recent conversation with two film critics from Cahiers du Cinéma, I mentioned that their high opinion of auteurs such as De Palma, Eastwood, and lately, John Carpenter, are considered esoteric in most corners of North America. They were not surprised by De Palma and Eastwood – the first much too stylized and the latter entirely too underscored – but they quickly shrugged off the notion of Carpenter as esoteric. Even so that back in August, when Ghosts of Mars opened in the U.S., I mentioned this story to the publicist handling the film. Hoping to persuade him that my presence at an advance screening I had heard about would not threaten any negative buzz, he let me see it a few weeks before its opening date. Though not a tremendous John Carpenter fan, I was ready for anything after speaking to those two Frenchmen.

Carpenter, whose work was sought out by a cult audience in the late ’70s after the dumping of his first feature, Dark Star (1974), surprised most critics and spectators with 1978’s Halloween, spawning countless sequels. None were from Carpenter himself, mind you: his early-to-mid ’80s oeuvre was received as “disappointingly” personal or excessively effect-laden. Others, not the purists, but somewhere close, supported everything from The Fog (1980) through Christine (1983), and the lively remake of The Thing (1982) has received scene-by-scene analysis by some scholars. Some of his proceeding work could be characterized as simultaneously high and lowbrow, with the possible exception of 1986’s self-reflexive Big Trouble in Little China, and the sellout Chevy Chase comedy Memoirs of an Invisible Man (1992). Carpenter has been in steady observance for the underrated They Live (1988), and a decade later in less-than-awe-inspiringly prolific days with Vampires (1998).

To say John Carpenter is in his twilight years is somewhat cynical. One might say he is in the process of finding a new niche. His European supporters will undoubtedly help him do so. Ghosts of Mars (2001) (which in the tradition of Alfred Hitchcock and Howard Hawks bears its director’s name in the official title) is, speaking from an objective critical standpoint, an interesting failure. By interesting, I mean it’s a frequently entertaining popcorn flick, a stylistically free-flowing genre manipulation, and a personal and personally crafted studio film (and by that I mean there aren’t very many like it). On top of direction, Carpenter writes his script, and composes his own music. The film is a failure insofar as the script doesn’t play out very well on its own terms, re-treading on many of Carpenter’s past films and adding to its mix the old cliché of a cop and a convict teaming-up to battle otherworldly (and otherwise undefeatable) forces.

Originally slated for release by Miramax as “Assault on Precinct 13 in outer-space” but transferred over to Sony after declining interest, Ghosts of Mars was shot over a period of two and a half months, mostly inside an enormous gypsum mine in New Mexico. Its feel is of a certain sound-staginess but that Carpenter owes to Howard Hawks: never the spatially ambiguous one, we understand from the very start the location and diagram of where the film takes place, where danger lies, and where freedom is just a step away. Carpenter’s shots are just tight enough so that each actor’s movements can be in line with their targets. The production design makes no attempts to fill any trends: the human crew of the film boast the drabbest uniforms since the Russians took to space. Similarly, its lead actress, Natasha Henstridge, never strikes any poses (unlike the summer’s other super-heroine, Lara Croft): her character, Lt. Melanie Ballard, is as austere in her mannerisms as they come.

Henstridge’s Ballard is the second commanding officer (after Pam Grier, in the film’s most masculine roll) over a team of ground troupes sent to transport a confined outlaw named Desolation Williams (Ice Cube) from a mining town and into the central city. Williams is to be tried for robbery and murder, though once the team arrives to make the pick-up, it is uncertain whether he has killed anybody. All that is certain is that corpses are everywhere, and many of the townspeople have disappeared. Ghosts, or rather, possessed townspeople, are discovered along the border of this town, all of them dressed in torn rags, metal rings and other sharp, inanimate objects which they use to sever the limbs of those still living.

The film trudges along like its characters’ preferred mode of transport (and object of the opening credits): the train. Fast, uncomplicated, single-tracked. There aren’t many surprises, but somehow it finishes its job with a minimum of fuss. As Michael Atkinson points out in The Village Voice, Carpenter seems to consciously be working against the “event movie.” Ghosts of Mars achieves the invisibility it builds for; perhaps Miramax could have marketed it more effectively, whereas its current distributor, Columbia/Tristar, thought they could attract the multiplex crowd. Certain pleasures cannot be denied, however: Henstridge’s character, for instance, is perfectly content with a drug habit, and her hallucinations portrayed quite vividly. And the Ghosts, while uninspired in design, have an interesting form of vision (when the film sometimes abruptly cuts to their point-of-view) that resemble wide-ranging digital video effects.

Nevertheless, Carpenter sets us up with plenty of action, but rather than empty gimmickry, what he needs most at this point in his career is theory. Theory in the sense of a larger consciousness of what his work might mean outside of a commercial realm. Indeed, Ghosts of Mars only works tonally; his style can be thrilling, especially at idle moments of the film where plot isn’t so much at play. After Hawks made Rio Bravo (1959), Carpenter’s cinematic holy grail, he went on to direct films like Hatari! (1962), Red Line 7000 (1965), and El Dorado (1967), which as my French friends will surely attest, seemed to work as allegories, or movies obsessed with the passionate process of making movies. Knowing Carpenter, this could be the next logical step. But again, we’ll only know when he has found his true niche.