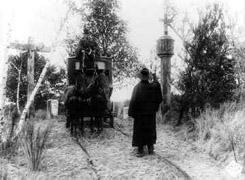 NOTE: The article below necessarily reveals the ending of the film.

Destiny was Fritz Lang’s first international success and it had a crucial influence on many major filmmakers. In his autobiography Luis Buñuel states,

When I saw Destiny, I suddenly knew that I wanted too make movies. It wasn’t the three stories themselves that moved me so much, but the main episode – the arrival of the man in the black hat (whom I instantly recognised as Death) in the Flemish village – and the scene in the cemetery. Something about this film spoke to something deep in me; it clarified my life and my vision of the world. (1)

Moreover, the shot of the lovers buried in the sand in Buñuel’s Un Chien Andalou (1928) is a clear visual reference to the Moslem episode of Destiny. Although he was usually obtuse about any influence that Lang may have had upon him, Alfred Hitchcock also singled out Lang’s film as making a special impression on him at the time of its release. (2) It is also stated that Douglas Fairbanks was so impressed by the magic effects that he had them copied and improved upon for The Thief of Bagdad (Raoul Walsh, 1924). (3) The young Michael Powell and Emeric Pressburger were also inspired by the film and The Thief of Bagdad (1940) – Korda’s super-production co-directed by Powell – betrays Lang’s influence. (4) Murnau’s Faust (1926) also betrays the haunting spectre of Lang’s film in several scenes, not least in Jannings’ commanding portrayal of Mephistopheles.

Yet the film was not an immediate success. On its first release in Germany, it was a critical and commercial failure. This failure was mirrored in France, and in the United States the film was re-edited and shortened and was seen by only a small number of spectators in this butchered version. (5) It was only after its successful release in other European territories, that the film was re-released in Germany and France to huge acclaim and commercial success. (6)

The film’s plot is very simple. Death arrives at a small village that is “lost in time” (a hint that this is a fairy tale), and abducts a young man. His distraught lover attempts suicide after reading in the bible that “Love is as strong as death” and so meets Death who informs her that her time has not yet come. She, having misread the biblical quote, states that we have been taught that ‘Love is stronger than death’, and Death, weary of mortality, agrees to free her sweetheart if she can save the life of one of three men who are about to die. He however knows that fate is stacked against the young woman. No-one can escape their destiny. Yet the woman plays out her role as the heroine in three different stories, attempting to save the man who will invariably die. This sense of inevitability is reinforced by having Walter Janssen, who portrays the lover, reappear as the lead in each of the three episodes, and Bernard Goetzke as Death, playing the critical role in the doom of the three young men.

The film apparently has a curious subtitle: “Ein Deutsches Volkslied in 6 Versen” (A German folk story in 6 verses). (7) Tom Gunning relates this subtitle to the film’s six reels, two reels for the opening, one for each of the three stories and the last for the film’s finale. (8) Unfortunately for this explanation, although the opening is approximately two reels, and the first two stories and the conclusion are about a reel each, the third story, the most compelling of the three, is as long as the previous two stories combined. So, although Gunning’s hypothesis can still be applied, the neat formulation of each part being a reel in length doesn’t hold. If the first two verses correspond to the film’s opening, the first verse would be the prologue (the meeting of the young lovers with death) and the second may be the flashback to the arrival of Death in the village and the construction of the giant wall around his abode. Each of the three tales and the conclusion would make up the four remaining verses.

As the subtitle implies, Lang and co-scriptwriter Thea von Harbou, for the first but not the last time, freely pillage German mythology, and German Romanticism, especially the works and spirit of the Brothers Grimm and E. T. A. Hoffmann. The film also feeds off the traumas to the German national psyche inflicted by the loss of World War I and the turbulence of the immediate post-War years. The film follows the multi-storied structure of Griffith’s Intolerance (1916) and Dreyer’s Leaves From Satan’s Book (1920), both of which were commercial and critical failures. Yet unlike Griffith’s film, Lang’s stories are not told concurrently, instead, like Dreyer’s film, they are told sequentially. But, unlike Dreyer’s film the stories are not told chronologically, from the oldest tale to the most recent. Instead, belying the apparently simple structure of the film, the narrative has a much more sophisticated concept of time. As noted, the film begins in an unspecified period, possibly the nineteenth century, with Death meeting the lovers, but then, with the introduction of the town’s dignitaries, it mysteriously and without announcement converts to flashback to explain Death’s acquisition of land and instantaneous construction of a wall around his property. With the lover’s arrival in the town, at the inn where the dignitaries are meeting, the film resumes its original storyline. The young woman later attempts suicide at eleven o’clock and it is at this moment that the film unfolds the stories of the three candles. This concept of the candles is taken from a Grimm fairy tale, “Godfather Death”.

These stories have three distinct locations set during vague historical moments. The first of these is set in a Moslem country, indistinctly at anytime in which the French were in contact with Moslem culture. That is, until the hero shockingly unholsters a turn-of-the-century revolver. The second tale evolves in Renaissance Italy and the final tale in legendary China. These tales end at eleven o’clock, back in the mythical German town, at the moment they had begun. Death makes one more pact to allow the young woman to save her lover. Whereas in Intolerance and Leaves From Satan’s Book the concluding modern tales have happy resolutions, unlike the preceding tales, Lang’s film has an ambiguous ending. The young woman decides she cannot sacrifice a baby to save her loved one’s life and so dies saving the child. Death, in his only moment of emotion, smiles briefly and compassionately with his sympathetic eyes and says, “I will take you to him. Whoever sacrifices her life, wins it back.” She is reunited with her sweetheart and the three figures, all wearing long dark cloaks ascend a hill, but at the final moment, Death dissolves with the cloaks and the lovers face each other and join hands. It is midnight and the film ends. Most commentators interpret this as the young woman being “reunited with her lover in the realm of death”, maintaining Lang’s fatalistic, pessimistic vision. (9) However, a more optimistic, alternate reading is possible whereby Death does concede defeat and returns the lovers to the land of the living.

Lang’s film, although ambitious, appears to have been a low-budget production. Lang overcomes this shortcoming by the use of mostly simple sets and by foregrounding the actors’ physical features. Lang regularly uses light and shadow to highlight aspects within the frame and to add a dynamic edge to the images. The screen is often splintered into darkness and light, with the image sometimes blocked in part of the frame. Lang’s sense of experimentation was pushed to its furthest when he filmed the fiery destruction of the poorhouse at night, a feat believed technically impossible because of the limited available film stocks. This footage may not match well with the scenes of the townsfolk, shot at twilight, gathering the water to fight the fire, but the final images of the inferno are impressive.

Lang rarely uses a moving camera, but this is well compensated for by his strong visual sense. The special effects are simple by modern standards, relying heavily on the Méliès style tricks of two decades earlier with their multiple, in-camera exposures. Yet they are very effective. One such moment occurs when Death explains the significance of the burning candles to the young woman. He parts his hands raising a flame off its candle, this flame dissolves into the body of a naked baby which then vanishes, indicating that the child has died.

The contribution of the team of set designers to this production should not be underestimated. Although, as stated, many of the sets are simple, they effectively create the appropriate sense of period. There are a number of very imaginative sets. The atmospheric cemetery in the German sequence was conceived by Walter Röhrig who collaborated on Das Kabinett des Dr. Caligari (Robert Wiene, 1919) and demonstrates the same abstract vision operating in Caligari. The clean geometric lines of the Venetian and Moslem episodes were created by Hermann Warm, another Caligari collaborator, while the ornate, fantastic vision of Imperial China was designed by Robert Herlth who would later work for Murnau on Der Letzte Mann (1924), Tartüffe (1925) and Faust.

Although Lang had a reputation for mistreating his casts, one of his great abilities was to perfectly cast pivotal roles. A couple of fine examples spring to mind readily from his German films, Peter Lorre as the disturbed child murderer in M (1931) and Brigitte Helm in the dual roles of Maria in Metropolis (1927). Just as Maria Falconetti is Joan in Dreyer’s The Passion of Joan of Arc (1928) and Max Schreck is the definitive vampire in Murnau’s Nosferatu (1922), Bernard Goetzke is the personification of Death in Lang’s film, more so, even, than Bengt Ekerot in Bergman’s The Seventh Seal (1957). Goetzke’s wraith-like features, his thinning, lanky colourless hair, his sunken cheeks, and his fatigued, emotionless stare make him perfect as ‘The Weary Death”. (10) Goetzke performance in Destiny stands out from that of the two lovers, the relatively inexperienced Walter Janssen and Lil Dagover (who had already made Harakiri [1919] and Die Spinnen [1919 & 1920] for Lang and Das Kabinett des Dr. Caligari for Robert Wiene, and would soon become one of the major international stars of the 20s and early 30s). The lovers are nondescript and forgettable, easily interchangeable with romantic couples in countless films. It is Goetzke’s silent presence, his deathly features which are memorable. When Goetzke stares blankly at the camera, an eerie extra-diegetic element is added to the film. Goetzke is staring at the audience, but also into the void that is eternity and death. Death’s stares into the camera are unlike similar privileged moments that the woman shares. In her case she reacts to horrific experiences. She sees the dead arise and march towards her, yet when Death stares into the abyss, nothing stares back. Death’s loneliness is palpable and frightening. And truly unforgettable.