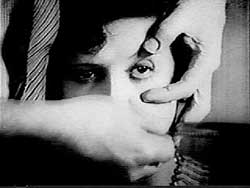 [Note on the opening credits: all names in the original credits are incorrectly spelt except for Dali’s name. The incorrect spelling, with its correction in parenthesis, is included above for the sake of completeness. Additional credits are also included.]

“It is only shallow people who do not judge by appearances. The mystery of the world is the visible, not the invisible.”

Un Chien Andalou was the calling card of two desperate, unknown Spanish artists. It “came from an encounter between two dreams.” (1) The script was an easy and joyful joint collaboration between Buñuel and Dali (Buñuel would continue to write scripts in collaboration for the rest of his life), and Buñuel shot the film quickly over two weeks on a small budget supplied by his mother. Dali later claimed to have had a greater involvement in the filming, but by all contemporaneous accounts this does not seem to have been the case.

The film illustrates Buñuel’s awesome ability as a fledgling filmmaker and served as a calling card for Buñuel and Dali into the elite club of the surrealists. After just over seventy years, the remarkable opening sequence still retains its power: “Once upon a time.” the introductory title proclaims. A proletarian Buñuel, feverishly puffing a cigarette, sharpens the blade of a razor. He cuts his fingernail to prove it is sharp. He exits the room for a balcony and looks at the full moon. A slither of a cloud is about to bisect the moon. Buñuel forces open wide the eye of a woman who has appeared from nowhere. The cloud cuts across the surface of the moon and the razor slices the eye apart. There is a second title, “Eight years later,” which like all of the titles in the film is paradoxical and seemingly irrelevant.

This sequence still shocks and it is purported that Buñuel, although the originator of the idea and the images, was nauseated the first few times he viewed the scene. (2) This is the most famous sequence but it is also the key to the rest of the film. As Jean Vigo so profoundly stated: “Can there be any spectacle more terrible than the sight of a cloud obscuring the moon at its full? The prologue can hardly have one indifferent. It tells us that in this film we must see with a different eye.” (3)

It is with this different perspective that the film must be viewed. One sequence leads seductively to the succeeding one, objects from one shot reappear in the next, a process of free association occurs; the illusion of a narrative of sorts develops. Dali stated in 1928, of the film’s theme: “the pure and correct line of ‘conduct’ of a human who pursues love through wretched humanitarian, patriotic ideals and the other miserable workings of reality.” (4) This seems to be the general perspective of most writers discussing the film. Nevertheless, Buñuel offered an alternative explanation: “Our only rule was very simple: No idea or image that might lend itself to a rational explanation of any kind would be accepted. We had to open all doors to the irrational and keep only those images that surprised us, without trying to explain why.” (5)

Buñuel wanted to shock and insult the intellectual bourgeoisie. Buñuel later said, “Historically the film represents a violent reaction against what in those days was called ‘avant-garde,’ which was aimed exclusively at artistic sensibility and the audience’s reason.” (6) His film was to be ‘a gob of spit in the face of art,’ as Henry Miller, an obsessed supporter of Un Chien Andalou, was later to describe his own Tropic of Cancer. To achieve this, Buñuel and Dali made a film that was open to a myriad of interpretations, rendering such analyses redundant. The crutch of understanding through narrative or theme is useless. As Dali explained, the intention of the film was, “To disrupt the mental anxiety of the spectator,” and one of the easiest ways to do this is to thwart the viewer’s ability to logically interpret proceedings. (7) In the film, as in dreams, there is a dislocation of time and space. The disruption of time predominantly occurs through the use of the intertitles which almost appear to be a key to an understanding of the film. The dislocation of space occurs through the opportunistic use of locations. A street and a beach occupy the same space outside the room, itself the central location of the film. What is necessary is to accept the film for what it is.

Yet most critics desire to increase our comprehension and ability to access the film through interpretation. As the film is made by a surrealist, psychoanalysis comes to the fore as an interpretative method. Yet interpretation is ultimately pointless. The most effective manner in which to appreciate the film is to allow the images to seduce, to watch with your eyes and emotions and not to seek an explanation.

This is a first film by two relatively young intellectuals and it is striking. Yet for all its critical and financial success, it never truly achieved its aim of outraging or affronting middle-class sensibilities. (8) Although there are reports of disruptions of screenings, these seem to be based on false memories of events surrounding the release of Buñuel’s next film, L’Age d’Or (1930), where the blasphemy and perversion quotient was increased. L’Age d’Or was banned, but Buñuel was disappointed by the bourgeoisie’s reception of Un Chien Andalou. He would later justify their response by stating, “What can I do about the people who adore all that is new, even when it goes against their deepest convictions, or about the insincere, corrupt press, and the inane herd that saw beauty or poetry in something which was basically no more than a desperate impassioned call for murder?” (9) Yet Sergei Eisenstein, on viewing the film in Switzerland in August 1929 stated that the film exposed, “the extent of the disintegration of bourgeois consciousness.” (10) Was Eisenstein far from the truth? Buñuel was raised as a member of the feudal gentry in a pious and disciplined Catholic Spain, and although exiled by Franco’s regime, he was, by the 1950s, increasingly accepting of Franco, even saying controversially in 1983, “I am even prepared to believe that he [Franco] kept Spain out of World War Two.” (11)

Un Chien Andalou was, as were many of Buñuel’s later films, a huge success amongst the French bourgeoisie, and a parallel can be seen between the careers of Buñuel and Chabrol. Chabrol is a self-confessed bourgeois who hates the complacency of his class. His films are deeply critical of the bourgeoisie yet his films have always benefited from the patronage of the middle-class. The same can be said of Buñuel. This can also be seen in Buñuel’s uneasy relationship with the Catholic church. Undoubtedly the blasphemous content of his first two shorts contributed to Buñuel’s banishment from Spain, and his ongoing vitriolic criticism of the Catholic church maintained the enmity of Franco’s government. But Nazarin (1958), about a saintly but impractical priest’s inability to improve the living conditions of the destitute peasants around him, nor to influence their hypocritical values, won an ecumenical prize from the International Catholic Cinema Office.

Buñuel always liked to shock. The eye-slicing in Un Chien Andalou, and Christ portrayed as the Duo de Blangis (obviously the Marquis de Sade) in L’Age d’Or are prime examples of this. Referring to Un Chien Andalou in 1983, Buñuel wrote, “I suggested that we [the surrealists of 1929] burn the negative… something I would have done without hesitation had the group agreed. In fact I’d still do it today; I can imagine a huge pyre in my own little garden where all my negatives and all the copies of my own films go up in flames. It wouldn’t make the slightest difference.” (12) Yet, for someone so nonchalant about his work, it is revealing that in the 1960s Buñuel created the sonorised version of Un Chien Andalou, based on the original music (Wagner, a South American tango) used for its original release.

How does Un Chien Andalou fit into the body of Buñuel’s work? As with all of Buñuel’s films, Un Chien Andalou illustrates Buñuel’s obsessions and is replete with references to his upbringing. Recurrent reference points are surrealism and religion, as already mentioned, seasoned with violence and a willingness to shock. Images from Spain appear regularly throughout his work as do images of the poor and suffering. It was Buñuel’s only silent film and perhaps for this reason appears more dynamic than his other works. Along with L’Age d’Or and Las Hurdes (1933), the film is very explicit and confrontational. These three films are exercises in style and form. It is here that Buñuel learnt his craft, but thereafter, as Freddy Buache has said, Buñuel could still shock but “He preferred to bury his explosives blandly beneath the surface of an apparently traditional style.” (13) However, this could be misconstrued. Rene Clair’s surrealist Entr’acte (1924), made four years before Un Chien Andalou, has a greater appreciation of, and daring use of style. It does make Buñuel’s film look traditional by comparison. Yet, for a film made as a companion piece to a Dadaist ballet, it lacks Un Chien Andalou‘s grace and fluidity. Clair may be the greater stylist, but Buñuel is the greater filmmaker.