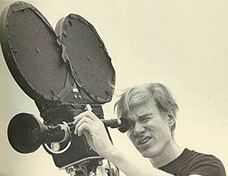 “They’re experimental films; I call them that because I don’t know what I’m doing. I’m interested in audience reaction to my films: my films now will be experiments, in a certain way, on testing their reactions”

Andy Warhol’s status as a serious artist had just gained a certain measure of plausibility or currency when he began making films in 1963. It was in the fall of 1962 that the ‘New Realism’ show brought together the works of Warhol, Rosenquist and Lichtenstein (among others), and it was shortly after this that New York’s Museum of Modern Art would have a contentious symposium on the newly dubbed genre or style to be known forevermore as ‘Pop Art.’ By 1963 Warhol had already produced – or was in the midst of producing – many of his most well known artworks: the Campbell soup cans, the Marilyn Monroe and Elvis series, and, best of all, the Death and Disaster tabloid images of car crashes, race riots, suicides, and the electric chair.

His decision to begin making movies using a second-hand 16mm Bolex camera can be seen as a continuation by other means of his interest in both technological reproduction and serial repetition. Warhol had experimented through the early ’60s with several different techniques for rendering the activity of making art impersonal or noncommittal. The artist himself has said that he gave up using rubber stamps and stencils because he wanted to be able to produce images which had a stronger ‘assembly-line effect.’ This would be fulfilled by his discovery first of the photo-silkscreen process and then of the motion picture camera. In fact, the latter can be said to be the most efficient of them all since it didn’t require either Warhol or his assistants to do anything except switch the device on. (In Warhol the shot is completed or completes itself only at the pivotal moment when the cartridge . runs out of film.) Warhol’s embrace of the mechanistic nature of the camera allowed him to make so many films in a five year period that they have yet to be adequately cataloged; a modest estimate would be in the area of seventy films – some, of course, are only a few minutes in length; on the other hand, the longest runs twenty-five hours.

Warhol’s interest in film was also fueled by the emergence of underground film. “The underground cinema,” Juan A. Suárez writes, “demonstrated that, in America anyway, anyone could make some sort of movie and get it shown somewhere. Accordingly, all manner of long-repressed sexual content burst scandalously on the screen.” (1) An exemplary instance: Jack Smith’s Flaming Creatures, which was filmed over seven weekends on the roof of an old theater on Manhattan’s Lower East Side during the summer of 1962 for a reported $300, and then had its premiere at the Bleeker Street Theater in April 1963 at a special midnight screening. (One of Warhol’s first films was a short of Smith filming scenes for his never completed second feature, Normal Love.) More astonishing than the actual existence of these works was the emergence of independent distribution companies (led by Jonas Mekas) willing to market them and theatrical venues – first in New York City but then increasingly in other major US locales – willing to exhibit them. Blow Job would premiere at the Washington Square Art Gallery during the summer of 1964.

One of Warhol’s aesthetic strategies was to situate atypical subject matter within the framework of art. In his films this included the use of character types who were typically elided from mainstream cinema: homosexuals, transvestites, hustlers, drug addicts, and other have-nots. (We should not forget that the word ‘homosexual’, for example, was still prohibited by the Hollywood Production Code, except through the use of pejorative slang terms or negative connotation, and would continue to be so until the late ’60s.) In this sense, Warhol’s famous aphorism “In the future everyone will be famous for at least fifteen minutes” – which is usually read as a prophetic statement about the media celebrity accorded to serial killers, Monika Lewinsky, Amy Fisher, etc. – needs to be understood somewhat differently: for Warhol, this “everyone” are the refuse of American society, and this refuse includes himself.

This aspect of his work has allowed recent scholars like Suárez to emphasise the political dimensions of Warhol’s oeuvre (i.e., as an expression of the artist’s outsider status as homosexual). Yet Warhol’s presentation of his chosen subject matter cannot be said to be without equivocation. Warhol’s distracted stare remains ambiguous or ambivalent and it is this hesitation which comes to affect the viewer of his works who no longer know how to take things in, to comprehend what they see – at least not in the way one is used to apprehending the objects submitted to one’s acquisitive gaze. (Do we seize these objects placed before us or do they seize us?) This is even more true of the films than of the paintings because of the addition of time. And Warhol extends the duration of his early silent works by having them projected at a slower rate than they were lensed (16 fps or silent speed instead of 24 fps) – one critic has aptly referred to this as “a ritardando effect.” (2) Later, when he begins making sound films, he will find other ways of dismantling audience expectations and decentering perception – for example, the use of asynchronous sound (e.g., unrelated offscreen dialogue) and his great works of dual-screen projection (Lupe [1965], Chelsea Girls [1967]).

Blow Job, like all of Warhol’s best works, is built on a tension between the serious and the absurd, between the real and the artificial. (“All of my films are artificial but then everything is sort of artificial. I don’t know where the artificial stops and the real starts.”) (3) Is the young man whom we watch for half-an-hour really involved in the titular activity? Is he faking it? (Perhaps the event is real but the pleasure is faked, or vice versa?) Will he climax? When? Will the camera catch this moment or will the magazine run out of film at the crucial moment? These thoughts and more (much more – it depends on who you are) pass through the spectator’s mind as s/he sits and watches Warhol’s Blow Job. It is a one-of-a-kind cinematic experience and it is not to be missed.