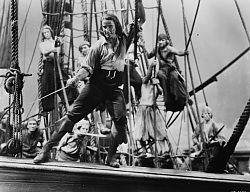 When, in an incredible athletic feat, Douglas Fairbanks Sr. slit the main sail of a ship riding recklessly on a knife’s blade in The Black Pirate (Albert Parker, 1926, USA), the figure of the lawless, uncompromising pirate was indelibly imprinted onto the history of cinema. (1) Scenes of English, French and Spanish galleons engaged in cannon battle at sea, men swinging on ropes with blades stuck between their teeth across the bulwarks of ships to be taken and plundered before hoisting the ‘skull and crossbones’ flag, are all key signifying images that we recognise from the swashbuckling genre. But how has cinema portrayed these seditious characters from history? As rebels outcast from conventional society, amoral criminals, pawns of the state or precursors of a socialist democratic subculture complete with safe work practices, health care and compensation plans?

History in the cinematic period drama is a spurious concept. Never has the salient facts ever stood in the way of a well developed narrative or plot twist no matter what pretensions the text has towards verisimilitude. Films such as Captain Blood (Michael Curtiz, 1935, USA) utilise a fluid approach to definitions and events. For the sake of this paper it is important that we understand what piracy or buccaneering is outside of how it is portrayed in the film: it is the practice of illegal seafaring acts (either violence or robbery) for private gain, which was most common in the Caribbean Sea in the latter half of the 17th century. It is regarded as an offence against the law of nations and therefore a ‘pirate’ is someone who can be arrested and tried by any nation regardless of where the crimes are committed. The pirate is truly someone who exists as an enemy of all states and, consequently, this makes the pirate ship a floating nation-less vessel. The privateer on the other hand is a ‘pirate’ whose actions are sanctioned by a state whereupon an agreement is reached that is mutually beneficial to both (generally financial gain for the harassment of an enemies’ ships/navy). Erroll Flynn’s character in his second seafaring collaboration with Curtiz (The Sea Hawk, 1940, USA) is deemed a privateer as he is in the employ of Elisabeth I and this goes someway to account for the transparent, “war time” colonial flag waving inherent in this film.

Captain Blood is made and set during a much more complex period. The film begins in the year 1685 and Captain Blood (Errol Flynn) is introduced as Dr. Peter Blood, a small town physician who confesses to being a ‘healer not a slayer’. This is despite admitting to a past fighting for the Spanish against the French, the French against the Spanish and a stint with the Dutch navy! His nationality is understood to be Irish. Peter is arrested for treating a local man who is participating in a rebellion led by the Duke of Monmouth, the illegitimate son of Charles II. The ill fated uprising against his Roman Catholic uncle, James II led to his supporters, who were mainly farmers and tradesmen, either being hanged or deported. In his defence at the subsequent trial Dr. Blood claims that he was administering to the injured man’s “wounds not his politics”.

Peter finds himself in Port Royal, Jamaica; an English controlled port already developed into an agricultural economy. Interestingly, at the time, Port Royal was as disreputable as the French port of Tortuga, the seething fleshpot where Blood and his cohorts find themselves later in the film. None other than the notorious, then reformed pirate, (Sir) Henry Morgan, governed it. (2) In Captain Blood, Port Royal is governed by the ineffectual Governor Steed (George Hassell), who complains more of his gout than enacts the duties of his office. The island is controlled by the mine and plantation owners, one of whom, the despotic and sadistic Colonel Bishop allows his daughter Arabella (Olivia de Havilland) to purchase Peter. He runs his plantation like a concentration camp to the degree that dissenters or those who attempt to escape are branded with the letters “FT” (fugitive traitor).

Blood and his fellow slaves (that is, fellow English slaves, as there is conspicuously no evidence of African or indigenous slaves) immediately conspire to escape. They seize their opportunity to commandeer a Spanish ship after it has attacked the port, the majority of its personnel coming on land to drunkenly carouse while celebrating their victory. The “crimson career” of the now “Captain” Blood then begins.

The exploits of the pirates are given little time in the film other than indicating that they are very successful, obtaining considerable wealth from “sinking English and Spanish ships”. It is well documented that pirates exercised a democratic discipline among themselves, electing their captains, marooning mutineers, arranging for the equitable distribution of shares of plunder, and drawing up elaborate insurance schemes for injuries suffered. They were also manned by crews of mixed descent and race as often the sailors of captured ships joined them as their pay was too measly to risk their lives, and low enough to be enticed to join the pirate life. There is no indication of this diversity on Blood’s ship, although there is reference to organisational democracy when he joins forces with the French pirate, Levasseur (Basil Rathbone). Together they write down an agreement concerning the division of wealth. Property was also regularly auctioned (not assumed to be property of the Captain) and this is played out in the scene with Levassuer, who has captured an English ship and holds hostage Arabella Bishop, the object of Blood’s affections, as he is of hers. The Frenchman is a hopeless Lothario and is affronted that Blood will hold him to their agreement over a beautiful woman. A sword fight to the death ensues, the demise of Levasseur predicating Blood’s knowledge of the current European political situation and England’s antipathy towards the French.

With Arabella is an envoy from England, Lord Willoughby, who carries with him a royal decree that pardons Peter and his crew (3) from all past crimes, frees them from slavery and offers a commission in the Royal Navy. The collective without nation is immediately dissolved, an anachronistic Union Jack is unfurled and Blood and his men sail off to fight the French in the name of the new king of England, the Dutch born William of Orange. (4)

Only moments earlier Blood had tried to convince Arabella to join him for the adventuress sea life, or rather implied as his newly purchased chattel, she will be forced to participate. The young maiden is horrified (despite having lived with her reprehensible father) and quizzes Blood as to his motives for leading the life of a pirate. “Revenge”, is his feeble reply.

In the final scenes in the film Blood is installed as the new governor of Port Royal – this being the indication that Blood is at least in part modelled on Henry Morgan (5) and reason enough for Arabella to now stand by his side. And thus the whim of political expediency returns Blood not as an advocate of an alternative political system, but as an overseer of a regime that advocates slavery, indentured labour, the extermination of indigenous peoples and allegiance to the British monarch. If for a time Blood and his men practiced a progressive political system on the high seas then the lure of terra firma and nationalism soon quashed the ethics of the pirate life. With Blood as governor and his English shipmates commissioned to the navy we are left with the absurd situation of an opportunistic, apolitical Irishman in a position of power within a system that is antithetical to many of his countrymen still to this day. While Morgan as a Welshman would have at least been eligible for the role, Blood, whether doctor, captain or pirate, would not have, as Ireland did not become part of the union until more than a hundred years later!