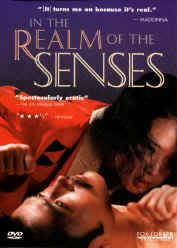 What could be more appropriate for a journal called ‘Senses of Cinema’ than a film entitled ‘In the Realm of the Senses’? In both cases the title plays on the double meaning of the word senses. The contributors to ‘Senses of Cinema’ do their best to unpack the meanings of filmic texts, to make sense of them, but also try to explore their sights and sounds, to identify their appeal to the senses. Oshima’s essay in pornography, In the Realm of the Senses, presents the full gamut of sensory experience – adding taste, touch and smell to sight and sound – and provokes a plethora of interpretations.

If his characters explore manifold means of sexual intercourse, Oshima teases the viewer with manifold means of gaining entry to his text. But, in the end, just as the couple is doomed to be unsatisfied, for desire is by definition insatiable, so we as critics are doomed to failure in the task of making sense of the text, for it is incomprehensible, it cannot satisfy our need to define it, to contain it, to make complete sense of it.

Is this just a matter of different conventions of sense and sensibility? That is, is it because the Japanese mind is unintelligible to Western critics? I think not. Impenetrable texts are not confined to inscrutable Orientals – think of Antonioni, for example. Furthermore, Oshima is a cosmopolitan Japanese, and the film was designed for international audiences. It was a Franco-Japanese co-production, shot in Japan, with Japanese actors and Japanese dialogue, but commissioned and produced by a Frenchman, and edited in France. The French title, ‘L’Empire des sens’ (The Empire of the Senses), plays on the title of Roland Barthes’s influential response to Japan as an Empire of empty Signs, all ritual and surface with no meaning or depth. Its Japanese director, Oshima Nagisa, responds to Barthes with a film which focuses literally on sexual rituals and material surfaces, on skin contact, but one which allows for endless interpretations, spinning meanings at a dizzying rate. For the French word, sens – like the English word, sense – refers not only to the five senses of sight, hearing, touch, smell and taste but also to meaning in the sense of import, connotation.

Both the English and French titles connect the senses to the state, via the words realm and empire, conjuring up memories of Imperial Japan as well as suggesting the majesty and oppressiveness of life under the sway of the senses, life ruled exclusively by sensual indulgence, sensory experience or semantics. Just as Barthes used the word L’Empire to describe his semiotic paradise (a land of empty signs) that he identified as “Japan”, so too do western audiences read the title of Oshima’s film as referring to Japan; but instead of a land of meaningless signs, it is envisaged as the site of sensual indulgence and of sexual licence.

However, the Japanese title of the film speaks neither of empires nor senses. It speaks of love and death, Eros and Thanatos. Ai no corrida – the Corrida of Love – links love to the bullfight, the ritualised fight to the death between the matador and the bull. This title brings ritual back into the arena, but it is a European ritual, whereby Oshima repays the Barthesian compliment. Instead of Japan serving as the space of exotic rituals, Oshima identifies Europe as the space of exotic rituals – the Orientalist gesture replaced by an Occidentalist retort and a turn-on to Japanese tourists.

2. In the realm of the censors.

If the various titles of the film were designed to tempt, tease and titillate a variety of audiences, through a kind of insider trading in dominant cultural myths, the film’s full frontal nudity and graphic depiction of pubic hair were designed to provoke and affront the Japanese censors. They constituted an in-your-face attack on Japanese censorship laws, which allowed graphic representations of violence, including rape, but forbad the explicit display of sexual organs and pubic hair. This taboo originated in the Meiji era and was connected to the campaign of the Japanese state to be accepted by the Western powers as a modern civilized state. Prior to the so-called Meiji Restoration, the pornography industry flourished in the cities of Osaka and Edo (the old name of Tokyo) both in literature and art. So sexual Puritanism was allied with national imperialism and the abuses/excesses of state power in the minds of New Left and libertarian Japanese social critics, artists and intellectuals, who regarded flouting the censorship laws as an attack on the state, a radical political act.

Early in Oshima’s film, Sada is propositioned by an impotent old man. She responds by flaunting her pubic hair; he desperately masturbates himself but his penis remains limp. It is tempting to read this scene as a malicious attack on the old guys in the government censorship offices who designated pubic hair obscene throughout the 20th century.

The film was not screened in Japan in an uncut version until this year. Not only was the film deemed obscene, but the publisher of a book of stills from the film was charged with obscenity. Oshima, who studied law at the prestigious Kyoto University before taking up filmmaking, ridiculed the notion of obscenity at the trial, with some fine hair-splitting, but concluded sagely with the pronouncement that the obscene is what cannot be seen; once something is seen, it is no longer obscene. That is, it is a matter of law, not morality.

The film is set in 1936 and is based on an actual historical event, referred to in the end titles. But reports of this sensational event were suppressed at the time; when NHK newsreaders began to report it, the government censors cut off NHK radio transmission. The militarism and ultranationalism of the time intrude into the film in only one brief scene when Kichi (the star stud temporarily AWL from sexual service) goes for a walk in the street, oblivious of a passing military parade cheered on by flag-waving youngsters. It is hard to read this scene in political terms, even harder to see it as a political protest. Kichi is so self-absorbed, so pre-occupied with his private life, that he has no interest in the public sphere; therefore he cannot function as an active political agent. One may read the scene as saying that if young men devoted their energies to making love, they would not be interested in going to war. But it could equally be saying that total immersion in private life is politically irresponsible for it precludes political activism. Maybe the scene is included just to remind viewers that this was the time of militant nationalism and imperialism, and that the behaviour of Sada and Kichi was aberrant, transgressive of dominant values but quite beyond public concerns. If one gives attention to Kichi’s body language, one notes that here he is dejected and brooding, not at all proud or confident, offering no optimistic alternative to militarism. He is in another world altogether. It is not necessarily posited as a better world, for he will soon voluntarily embrace his fate as will the young soldiers, will give his life for the satisfaction of a stronger power, the desire of a woman. Like the soldiers, he is destined for death.

When I began my research on the Edo woodblock prints, in the mid ’70s, shunga prints were only available to male collectors in under-the-counter sales. The British Museum had a collection, as did other European and American museums and galleries, but you did not see them displayed in public, either in Japan or abroad. The scholarly specialist print journals in Japan used to reproduce them with large excisions, all whited out, in the places where the genitals and pubic hair should have been.

The film departs from shunga tradition in its narrative trajectory – in particular, in the build-up to, and enactment of, the castration scene. The shunga industry had close links with the prostitution industry and catered to the fantasies of its male customers. In the world of shunga, the women are always wet, the men perpetually potent. For its consumers, it offered lubricious education in the art of love-making and a souvenir of, or advertisement for, the pleasures available in the prostitution quarters. All the major artists in the print industry produced pornography but these prints, unlike their other prints, were unsigned. They were a means of earning good money but not a means of enhancing one’s artistic reputation.

Oshima’s film is clearly not just a turn-on (or just a turn-off). Like several of his other films (e.g. Death by Hanging [1968] and The Boy [1969]), it was based on a real news item, a documented sensational event, which provoked Oshima into creative mode. He is clearly interested in exploring sexual relations as an arena of power play. Always a political filmmaker, he is not content with affronting the censors. His film traces the empowerment of a woman of low social status, and the reversal of roles between master and servant. The castration of her master-lover is prefigured early, when she is shown wielding a knife in a brawl in the servants’ quarters, and the relentless build-up to the climax makes it seem inevitable. He becomes increasingly more passive, she increasingly more aggressive and demanding. At the obscenity trial, in 1978, Oshima claimed the film was speaking for Sada and the rights of all subaltern women. But this film is no simple celebration of either womanpower or the desires of subaltern women. Sada’s facial expression assumes more and more demonic elements, towards the end of the film; if the film is endorsing her power, it would also seem to be endorsing fear of women and the threat of castration by them. This is not a love story. Sada is intent on satisfying her desire and ultimately it is the penis alone that she craves and needs to service that desire, a human dildo rather than a man. But the penis that she triumphantly severs from its dead owner’s body is an appendage of the male body, and in that sense the film could be said to celebrate fetishization of the phallus. In old rural Japan, as elsewhere, large stone phalluses were rubbed and worshipped as fetishes that embodied the hopes and desires of ordinary people for potency and fertility.

In the mid ’70s, when this film was produced, it created a storm of controversy, and encountered censorship problems in several countries, not just Japan. Its explicit treatment of sexual intercourse and its bloody castration scene outraged and disturbed viewers brought up on Hays Code morality. It was an international sensation, provoking packed houses and lively debate at the 1976 Melbourne Film Festival.

Now, 25 years later, its re-release in the original uncut version has passed almost unnoticed by viewers in Melbourne, despite the plaudits of film critics. It has become a classic, but not a cult classic apparently. That is the unkindest cut of all. The public’s lack of interest serves to remind us of all those clichés about yesterday’s sensation and the ephemerality of fame. Saddest of all is the evident lack of interest in challenging cinema, cinema that challenges the viewer aesthetically, politically, emotionally and intellectually. Oshima at his prime was one of the few filmmakers in the history of cinema to produce such cinema.

Maureen Turim, The Films of Oshima Nagisa: Images of a Japanese Iconoclast, University of California Press, 1998