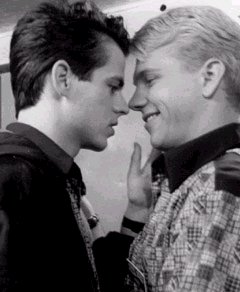 Queer cinema comes in many sizes. In the past twelve months local theatre chains have released no less than three explicitly queer features: Bedrooms and Hallways (Rose Troche, 1998), Get Real (Simon Shore, 1998) and Boys Don’t Cry (Kimberly Peirce, 1999). But while the content of these films vary – urban queer living, high school sexual awakening, and mid-American homophobia – they all come with a certain stamp of approval: safe for straight viewing.

For the past six months I sat as a member of the programming committee for this year’s Melbourne Queer Film & Video Festival. At each viewing session, I held these overtly safe films in mind as a litmus test for the one thing the festival meant to me: risk.

Did we achieve this goal? In short, yes and no. On one hand, Edge of Seventeen (David Moreton, 1998) sat uncomfortably close to the edge of Get Real, tracing the sexual insecurities of a high school teen in almost mediocre style. On the other hand Bruce La Bruce’s latest effort, Skin Flick (1999) pushed violent eroticism to its extreme with a group of skinheads who steal, bash and fuck their way around London.

But to say Edge of Seventeen and other such films failed us would be an oversight. Not only did its session sell out, it was also a popular favourite. As much as the festival’s mandate is to push queer and aesthetic sensibilities, the festival also exists to respond to audience (community) needs.

More so, even with its similarities to retro 80s films such as The Wedding Singer (Frank Coraci, 1998), Edge of Seventeen will be unlikely to get a general release. While the production values lend it sufficient ‘eye candy’, there aren’t enough straight characters to dilute its queer presence. Without the festival, these films would otherwise pass us by.

In the search for films with strong queer content, some sacrifices had to be made. Gritty low-budget films such as The Joys of Smoking (Nick Katsapetses, 1999) had the production values of a brick. Others, such as local short Crayfish (Timothy Spanos, 2000), Lez Be Friends (Uncle Steak & Auntie Lou, 1999) and Can I Be Your Bratwurst, Please? (Rosa von Praunheim, 1999) suffered from poor acting, editing and scripting problems. Yet they all were sufficiently erotic, perverse and entertaining to warrant inclusion. The poverty of their production values seems only to add to the fact that these short films have come more from the heart than the bank balance.

In programming, we were often heartbroken by films that dabbled at the razor-edge of controversy and dare, yet suffered such poor execution that we were compelled to reject them. Some snuck in, largely on faith that audiences would embrace them as the low budget affairs they are.

Others seemed good ideas at the time but audience responses told a different story. Forever Bottom (Nguyen Tan Hoang, 1999), four minutes of one young Asian man being penetrated in numerous settings, drew few giggles and more question marks of ‘Why? Oh why did they select that?’

The opening night film also drew mixed reactions. Hundreds turned up to the Astor for the glossy US flick But I’m a Cheerleader (Jamie Babbit, 1999), concerning a young lesbian whose parents send her to a ‘homosexual rehab’. Contrary to many other inclusions, Cheerleader was crisp, tight and seamlessly punchy, yet did not draw out the audience cheers and laughter of last year’s opener, Relax . It’s Just Sex (P.J. Castellaneta, 1998).

For the second year running, the Not Chicken package demonstrated the urgency of showcasing films concerning lesbian, gay, bisexual and transgender youth. Ross Jacobs, in coordinating the youth package, balanced youth optimism with outright despair. US short Get the Bowheads (David Hildebrand, 1997) was a tongue-in-cheek fantasy about revenge on a group of homophobes, while Melbourne filmmaker Dean Francis stirred controversy with Escape from Hell (Dean Francis, 1998), the story of a gay youth who chooses suicide as the only way out.

For the first time, the festival launched Race to the Screen, a package of films about queers of colour. The package served as a retrospective of films dating back to 1991, with the mandate that they concern queer and non-Anglo issues. Attendance was moderate but the package was extremely well received, including the panel discussion that followed.

It is in some respects regretful that outside of the Race to the Screen session there were only perhaps four other films that concerned queers of colour. Of 99 films accepted, that’s a small average.

The problem partly derives from the fact that a disproportionate number of queer films emerge from the US, Canada and Britain. That said, I would personally like to see next year’s programmers make more pro-active attempts at unearthing queer films from other, less represented, nations. This sentiment was reflected at the panel discussion for Race to the Screen, where people argued that race-focused films should be equally represented in the wider festival program.

On a more encouraging note, Race to the Screen exemplifies a key to the festival’s curatorial style: that certain sessions and films are selected with full knowledge they will only attract small audiences. These packages – including Not Chicken and Gender Agenda (the transgender package) – satisfy often marginalised niche sectors within the queer community, and have all emerged from voices within their respective demographic.

Given that this was the tenth year for the festival, noticeable was the absence of a broad retrospective of the last decade of queer cinema. As a niche pocket, Race to the Screen offered a retrospective over most of the past decade.

To initiate a meaningful retrospective of all queer cinema from around the world over the past decade would take more than an entire festival. The alternative would have been to fill one or two sessions, yet this would invariably have opened the way for criticisms over what was excluded. Given the queer community’s all too familiar understanding of issues of exclusion, it would have been dangerous to attempt a representative retrospective of such a diverse and fragmented community.

Instead, the festival widened the window a little by squeezing in more sessions and films than previous, and offering special packages covering race and transgender issues.

While many of the films did not come with the ‘safe for straight viewing’ stamp, in broader respects the festival took the safe route by following the formula of last year. To the degree that it satisfied audience needs it was a success: early indications suggest a 10% box office increase from 1999.

To the degree that the broad vision challenged audiences to see things anew, I feel the festival has some way to go. The ‘girls’ package attracted virtually 100% women, while the respective ‘boys’ package brought in almost entirely men. Most of the Race to the Screen audience were people of colour, while Gender Agenda attracted a large transgender demographic.

Are we forcing ourselves to look at the other within, or are we just satisfying our senses?