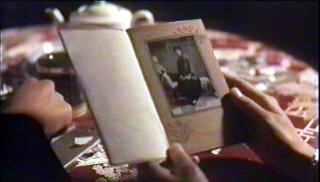 When you take apart a film, and map out all the narrative decisions made from Reel A to Reel Z, and try to figure out why the director made those decisions, a movie can become a part of your personal history. It can be a journey of remembering what inspired you to watch it so closely in the first place, evoking feeling about memories you’d never normally have. Hou Hsiao-hsien’s The Puppetmaster (1993) especially, because it’s a film about personal history.

Documentary or fiction or both or none? As Peggy Chiao has commented, The Puppetmaster has the clear aesthetic intention to blur the line between doc realism and fiction realism, placing the real Tien-lu on the very sets where actors will recreate his own life.(1) My impression is that the film is played out like this because in order to control the fate, or pull the strings, of the characters of Tien-lu’s own life, it is essential for him to be as deeply immersed as possible in the film text. He is looking back at the past as the god of his own life, nearly fictionalizing the film by becoming just another character.

The E! not-so-True Hollywood Story. You will notice that the film is occasionally different from what Tien-lu is actually saying in his first-person monologue. For instance, in Scene #52, (2) Tien-lu explains that his father-in-law woke up in the middle of the night, realizing he had fallen asleep in a coffin and shivering from malaria, when we clearly see him wake up in the morning. To allow such moments of contradiction is obviously a conscious decision that re-enforces the structural freeness of the film. As Peggy Chiao has said of Hou’s historical pictures, “There is no attempt to be historically faithful… Hou Hsiao-hsien’s starting point is humanity.”(3)

I didn’t get it? In The Puppetmaster, we’re only told what the hell happened after we have already seen it, sometimes 3 or 4 scenes later. Some would look at this as a way to deliberately tie knots in a film, but Hou fans will argue that it is used masterfully. The most extreme example in The Puppetmaster happens in Scene #50, when we hear firecrackers but don’t actually see them till the proceeding scene. And even when we have located the source of the firecrackers, we wonder why they are being lit. Only three scenes later do we discover that Tien-lu was lighting them in commemoration of Taiwan’s liberation from Japan. I doubt most would catch this, but it is something that might subconsciously prepare the viewer for the liberation, which is, after all, one of the most important details in the film.

This narrative pattern is broken at the very end however. In Scene #57, Tien-lu tells the story of the sabotaged planes that finally freed Taiwan. This discourse is long and in the following scene we see the people of the story dismantling the Japanese planes. To think of this narrative decision logically, it’s the only way the film could have ended. To reverse the beginning of something is to end it, and I think Hou was very conscious of that.

“Like putting together passing clouds…” is what screenwriter Chu Tien-wen said of The Puppetmaster. There are four different ellipses of time in the film, and in one incredibly dense sequence, two of them happen in a row. Hou Hsiao-hsien has said of these narrative omissions, “…I thought about it and finally found an answer in my own home. At that time, my daughter was going through a rebellious phase. Every morning I awoke to the sound of arguments between my daughter and her mother. On the other hand, I have a friend who has a four-year old daughter who sticks to her mother like glue. Wherever the mother went, there the daughter would be, even in the toilet. Hence, I got to thinking, when she was young, my daughter also went through this stage. Between the ages of four and fourteen, I could extract a section, and omit everything else. Things would still be clear. The problem is that the section you use must be rich and brimming over with material. This type of structure is like our ancient Chinese theatre. It simply gives you a scene without much of a clear narrative, unlike Western drama where all the elements must be put in place. Ellipsis and other indirect narrative methods are, ironically, more clear-cut and to the point. It all depends on how you master these methods.” Indeed, these breaks feel immense because, as Kent Jones has described, there is no such thing as a cutaway or an insert in a Hou Hsiao-hsien film, the logic built around these breaks and juxtapositions. (4) By discovering exactly what has occurred several minutes after viewing these transitions, the film effectively conveys the passage of time.

Only with time do we recognize history. Perhaps what makes The Puppetmaster so “historically unique” is the way it forces its audience to look back at the very past of the film, as if they were looking at a memory of a personal history. As James Udden has recently pointed out, “One is not to understand or analyze history. One is to engage it directly with one’s present consciousness…” (5)

And so, this brings me to my first point: from what The Puppetmaster demands of its audience, it can become a part of your personal history.