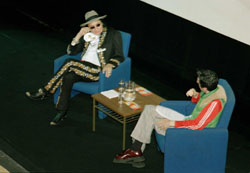 “You’ve gotta come and hear Jack Nitzsche talk at Cinesonic. The guy’s pretty old, so it might be your last chance to see him”.

Jack Nitzsche passed away on Friday August 25th at the Queen of Angels hospital in Hollywood following cardiac arrest brought on by a recurring bronchial infection.

Only eight weeks earlier, he was sitting across from me on the stage at The Capitol Theatre in Melbourne, Australia. Many people around the world had been asking me since: “How the hell did you get Jack Nitzsche to come to Melbourne?” Most of them were thinking of a bundle of various Jack Nitzsches dotted across rock’n’roll history: the cool beatnik dude often spotted holding music charts in a Spector session; the ultra-hip session musician banging the ivories for the Stones and Buffalo Springfield; the wired compadre of Willy DeVille.

The Jack Nitzsche I chased to bring to Melbourne was the one who lived in the movies. Jack Nitzsche? – film composer and score orchestrator. Performance, One Flew Over the Cuckoos Nest, Cruising, Blue Collar, Hardcore, Cutter’s Way, Starman, Stand By Me, The Hot Spot, Indian Runner, The Crossing Guard. For years, whenever any dork said that only orchestras were capable of producing great emotional depth in a score, I would always say three names: Morricone, Takemitsu and Nitzsche. Proof is waiting at your local video store. Get out those movies and listen to them now. Hear how Jack uniquely combined a rock’n’roll producer’s aesthetic with the vibrancy and scope required by movie music. Listen to his use of instrumentation, arrangement of melody, choice of musicians. Witness his ability to move from sublime elegiac lines to dense pits of electrified frenzy. There is no other.

Jack had been on a wish-list list of guests I dreamed of bringing to Cinesonic. I started making inquiries back in late 1997 as to how I could contact him. From many sectors, word came back: stay away from Jack. Sex, drugs and rock’n’roll. Bad vibes, bad vices.

Foolishly, I heeded their advice.

But in the intervening years, smack hit Melbourne so hard, that the count of people I know who have OD’d, all young, is now moving on to my eleventh finger. Across that time, my attitude to hard drugs changed drastically. I accepted them much more, to the degree that I now maintain a non-judgmental view of the so-called ‘substance abusers’. Junkies, Christians, parents, each to his own. Good luck if you can pull through. I realized that my hang-up about smack in particular was petty and largely unfounded.

Reflecting on this, I chased Jack up for the 2000 conference. I sent a letter (in a real envelope) to Hollywood. And a reply came back: sure, I’ll be there. At the Cinesonic office, we were so thrilled and excited. This living legend was coming to Australia.

I cannot describe what I felt when I first saw Jack. It was as if Keith Richards had erected a gothic statue to the memory of Johnny Thunders and that statue came to life. It was hard to keep in mind that I was looking at a 63-year-old man, blind in one eye, seemingly out-of-it, but elegantly swaying in a permanent state of post-intoxica. Pancake make-up, flamboyant hats, crocodile boots, black capes, gold crucifixes, pitch black shades, you name it. Our few discussions were always tentative. I was especially nervous. Part of me couldn’t figure out how best to give Jack what he wanted, while the other part of me just wanted to tell him again and again: you are so important to the history of film music, people just haven’t caught on yet. Every time I stated this, he shrugged awkwardly. My sincerity always came off a bit tacky. I just kept hammering him with it.

I quickly became sensitive to a strange contradiction by which he seemed bound. Here he was on the other side of the earth being honoured with as much esteem as we could muster, and while he liked the honour, he had apparently lived through lots of negative criticism – from Hollywood, in particular. Like, Jack is bad, dangerous, unreliable, unprofessional. Like, Jack is messed up by drugs. As if Hollywood isn’t full of coke’n’base-head producers, writers, actors. As if Jack is somehow doing the wrong thing in such an insular, hypocritical, self-congratulatory community. I felt he was so used to being dismissed that he found my compliments false, a trick, a trap, a delusion.

Jack was probably too rock’n’roll for Hollywood. Not that he was overtly rebellious, but his whole sensibility, his life-worn demeanour, his sartorial manner, his way of communicating with musicians simply did not fit the Hollywood production model of musical mimicry. In fact, the rise of alt.rock compile song scores could be viewed as a way of safely and clinically importing rock noise via the clean syringe of A&R pushers and their music supervisor front-men. Imagine Michael Douglas having to deal with Snoop Dog during a score session. Imagine the complete communication breakdown between the two. No post-dubbed gun shot effects needed there.

Going through Jack’s film career with him, it was apparent that he had done his best work with a kindred gathering of ‘outcast’ directors: Donald Cammell, Milos Forman, Paul Schrader, John Carpenter, Dennis Hopper, Sean Penn. A curious group of directors whose individuality has led conservative film history to cursorily acknowledge them as low key mavericks: difficult, unpolished, ambitious. Not garish enough to be ‘outlaw’; not overdrawn enough to be ‘revolutionary’. But directors whose films will outgrow such bare criticisms and meagre assertions.

In Jack’s hotel before the big night of his ‘onstage interview’ for Cinesonic, he held up too totally outrageous mariachi suits: “Which one should I wear tonight?” One was a melange of deep olive greens and intricate braiding, the other: black with searing swirls of gold and red. “The black one” I said. “It’s totally unrestrained”. Jack smiled: “I know”.

This Jack was lucid, alive, keen, perceptive. He went through my list of questions with clarity and savvy. At that point, I realized that the ‘out-of-it, man’ presence Jack had conveyed to many people was simply the result of jet lag. It figures. Imagine anyone that old not used to travelling such long distances. Your grandfather would probably appear a dope head. Jack certainly was not as flaky as some people thought. At one point, I asked him about a chord structure for a cue in Hardcore. Without batting an eyelid, he hammered out the arrangement: “The guitar chords shift from C to G while the bass hangs on B”. Bam. This guy still had it all locked in his head.

Getting him out here was an attempt to unlock that wealth of technical artistry and musical imagination still pumping in his head. Jack talked about getting back into producing music. At least now, his legacy can be documented in various forms. He was working on a biographical book with a writer which hopefully will be published sooner rather than later. Jack assured me this book would “set the record straight” about his life and his work. Plus, he had already done much work on selecting his best material from a vast archive of recordings to be released as a retrospective CD-box set. Modestly, he said: “There’s some good work there, man”.

I cannot underestimate the quiet bravery it would take for someone like Jack to openly accept an invitation to come all this way. For that, I thank him dearly. I also thank him for the pleasure of walking with him through Melbourne’s tacky Crown Casino and turning the head of every tastefully attired loser-gambler in the place.

But most of all, I thank Jack for his music.