How do you represent the ‘unrepresentable’, or even the ‘unimaginable’? This question has been at the heart of a wave of post-Khmer Rouge cinema by second and third generation filmmakers both in Cambodia and in the diaspora, looking to comprehend the horrors of the genocide amid the silence that surrounds it. The killings of a quarter of the population and the destruction of the country’s film industry created a national amnesia so important that, still today, some Cambodian youths refuse to believe that the atrocities of Khmer rouge occurred.

In her latest docu-fiction, The Plastic House, which had its international premiere at Vision du Réel 2020, Adelaide-based writer and director Allison Chhorn grapples with the tradition of silence that surrounds the history of her Cambodian parents. The film begins at night with a car-lit shot of a cemetery’s gates overlaid with the handwritten words ‘Mum: 1959-2015’ before driving off to a roadside memorial. This time the words ‘Dad: 1959-2016’ appear across the screen. Anchored in activities of daily life such as reading and sleeping, the rest of the film follows Chhorn through winter as she carries out the family business of growing runner beans in the greenhouse of her family home in Adelaide, here known as The Plastic House. From the outset, the film offers us a glimpse into the tense world of merging reality and fiction – the film never resolves whether Chhorn’s parents are dead or alive.

Long takes of Chhorn at work in the greenhouse are juxtaposed with moments when her parents were alive, captured on low-fi camcorder. We never fully see Chhorn’s face – she is either visible from behind, in profile or concealed by her bob or surrounding leaves. The palimpsestic nature of memory work is at play; the present always reveals remnants of a silenced past. “The way the film is edited is based on my perception of time. Sometimes painstakingly stuck in the present. Sometimes projections of the future jump out at me” reveals Chhorn – “But always informed by the past and maybe too attached to personal memories”.1 One of the last scenes is of Chhorn harvesting pea-seeds from dry pods with her mum, as she first started out in the film, making the future as the immediate past. Taking influence from the works of Chantal Akerman and Pedro Costa, whom Chhorn says inhabit a space between fiction and illusion, the amalgamation of past, present and future in the Plastic House creates an alternative form of historicity.

The effect of these spectral remnants is not so much transmitted verbally as viscerally. Notably, The Plastic House is devoid of music score and almost entirely without dialogue.  Chhorn, who has a background in sound design and visual art, focuses on diegetic sounds including planes (from the nearby Royal Air Force), chirping birds, dripping water, cars and trucks. This choice attests to the legacy of silence within migrant Cambodian families between parents who speak one language (Khmer) and children who speak another (English). In an interview for the Adelaide Review (2020) Chhorn observes how this intergenerational gap is captured beyond words: “In my work, I want to acknowledge how silence in our relationships also shapes how we experience the world […] and things we want to say to each other but can’t”.2 Silence is key in translating between worlds where memories are too painful to be articulated. While the language in The Plastic House is mostly used to duplicate this silence, sometimes, the silence is confronted. Says Chhorn’s mother talking to someone over the phone: “Wait ‘till I send it [the film] to you. And you can share it and they can see it too. For those who don’t have the internet they can play and listen too”. While this rare moment of dialogue literally ‘breaks the silence’, it is an invitation to use the film as a mediator for dialogue. 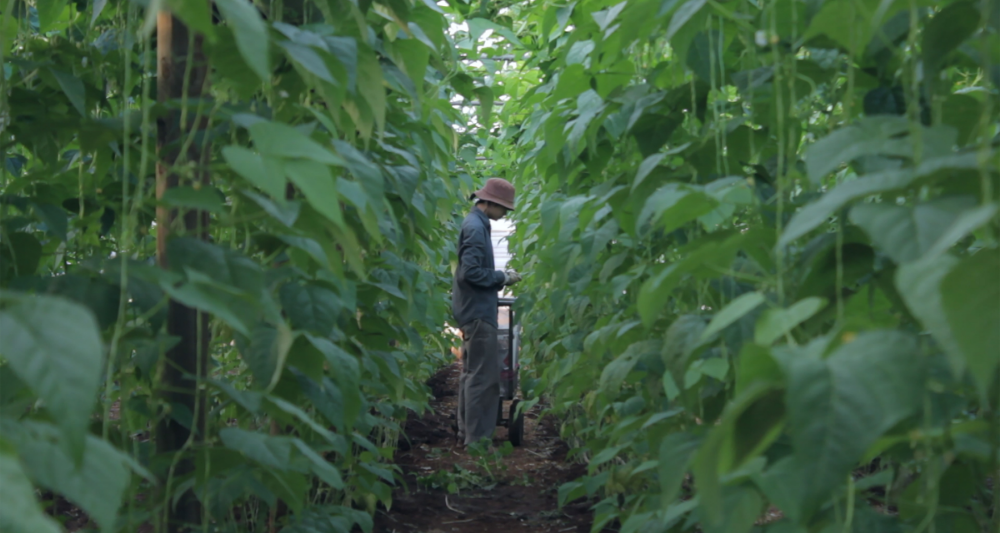 At first it may appear as though The Plastic House is sealed. It is an insular place where Chhorn has created to conceal herself amongst the rows of pea vines, away from the background noise of airplanes, in an attempt to access her parents’ past. In the director’s statement, she writes about finding solace in the monotony of “pulling dry leaves, picking seeds, planting, picking beans […] as if the process itself was a way to heal, or at least temporarily forget”.3 Acts of manual labour such as these allow Chhorn to maintain a semblance of control over other inevitable events like the weather or the passing of her parents.

This bubble of memory reconciles past and present by relying on memories that precede Chhorn’s birth, but their transmission is so deep that they become memories in their own right. Working through the past involves a dialectical exchange between imagination and recollection, as if borrowing from a mix of collective and individual memories. The Plastic House is layered with references to the Democratic Kampuchea’s atrocious reign during which millions were transported to the countryside and forced into manual labour in rice fields – although this is something that the filmmaker admits realising after the film was completed. The short bob-haircut Chhorn gives herself at the start of the film, the daily black and grey uniform she wears, the repetitive agricultural work and the pervading feeling of isolation all point to a kind of self-imposed memory work-camp. The blood-like colour that stains the hand-trowel used by Chhorn to dig the earth speaks to the haunting remains of the dead. The earth houses unspoken traumatic remains and digging the earth, metaphorically here, but literally in the case of the haunting presence of killing fields in Cambodian countryside, is a possible conduit for harvesting memories and making sense of the legacy of absence Chhorn inherited.

Despite the sealed structure she has worked so carefully to maintain, the memories Chhorn comes across in her digging and farming cannot be easily manipulated at a distance. In one scene, Chhorn painstakingly removes her plastic gloves, stained at the fingertips by the same burgundy colour as the hand-trowel, as if peeling off the barrier that stood between herself and those geological memories. And yet, despite this protective layer, her hands are still partially covered in bits of earth. This is one of the triggering elements in the film that challenges a binary approach to thinking about memory: outside/inside, collective/individual, human/non-human. Evidently, the past is a fleeting memory that cannot withstand external forces. There is no clear demarcation between the outside world and the cocoon-like structure of The Plastic House. It doesn’t take long for the bubble of memory to disintegrate and Chhorn to face the uncertainties of the world as it unfolds with her. The film is filled with cracks and leaks, figuratively and literally, which follow Chhorn outside the greenhouse and into her room. A range of chemical and climatic agencies threaten the ability of The Plastic House to cope, which inevitably collapses. The plastic that covers the greenhouse cannot resist the harsh wind and rain, leading to discoloration, rotting and leaks. 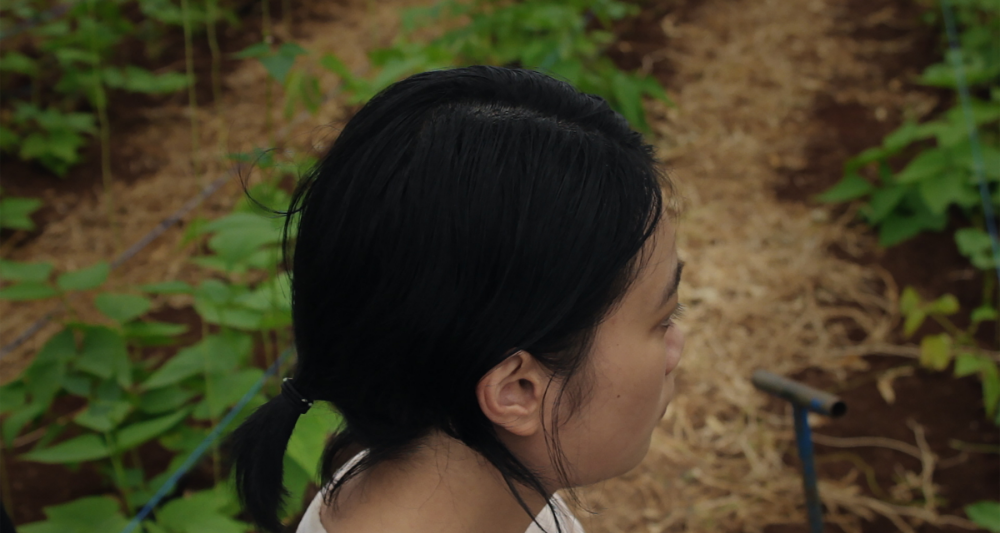 Chhorn’s helplessness in saving the Plastic House from turning to ruin, amid the uncertainty of the materials, are central to giving the film its dramatic structure amid the gentle pace of the story. The film ends with Chhorn leaving the Plastic House behind and bracing herself with a shovel. Yet, this ending is somehow hopeful and leaves the viewer with unanswered questions – is Chhorn on her way to building her own Plastic House? Will she do things differently this time? The Plastic House is a meditation on re-piecing memories that is both a silent and a raging fight.