I first saw Corinne Cantrill’s feature-length essay documentary In This Life’s Body in the old Valhalla Cinema in the Sydney suburb of Glebe. It must have been around 1985 and Corinne and her husband, Arthur, had come up from Melbourne for the screening. The Cantrills’ avant-garde film work was well known amongst cinephiles both internationally and nationally, and many of us from the Sydney Filmmakers Co-op were keen to see it.

The opening sequence – a silent slow-motion series of black-and-white negative images – shimmering reflections in water and a glimpse of a nude woman on the edge of a rock pool then a landscape gradually revealed a middle-aged nude woman (Corinne) lying on her back, her body almost indistinguishable from the contours of the land she was lying on. Corinne’s voice-over began and, from the darkened cinema, she stepped in front of the screen and began to do Tai Chi. Her body silhouetted in front of the moving image, her movements in tune with the rhythm of the unfolding film. I had never seen anyone perform live with a film before. I was mesmerised. 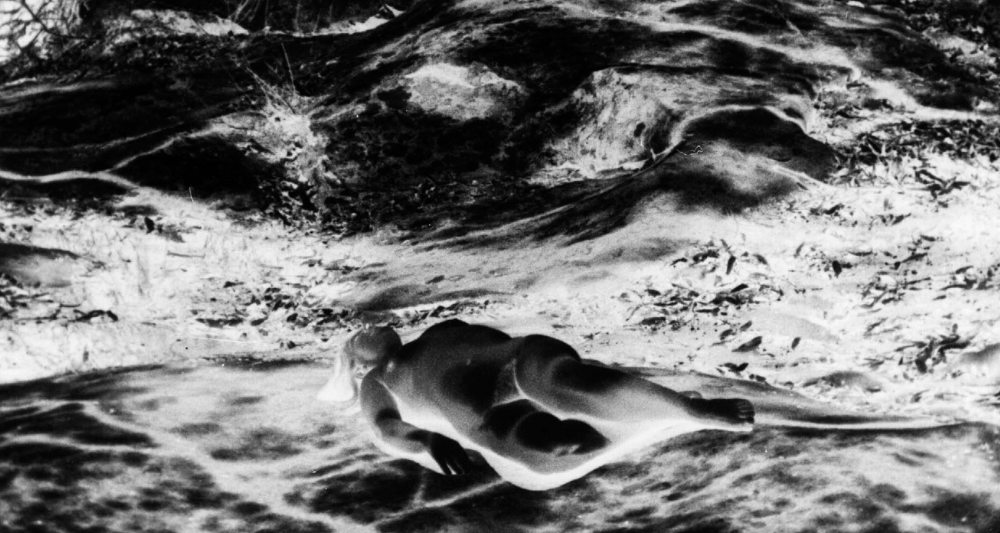 Negative image of Corinne Cantrill lying nude in the landscape

I was aware of the Cantrills’ experimental films, but as the film began to unfold, I realised that this film sat outside of the Cantrills’ body of work in important and crucial ways. Corinne had been diagnosed with possible cancer and was under “pressure to have massive surgery”. She was in crisis. “My life was unbalanced. The body had been neglected”.1

She decided to take a year off to heal her body and reflect upon her life. Searching through the family photographs she began to piece together her life and make a film about it.  Two years later the result was a 147-minute essay documentary, narrated by Corinne and told almost exclusively through the use of hundreds of black and white still photographs. It was a radical departure from the non-narrative, formalist film-as-art work that had defined the Cantrills’ body of work up until that point. Corinne’s voice-over is the main soundtrack and it is her wounded body that is at its heart, making it highly personal and quite unlike their other more formal work.

The Cantrills occupy a unique space in our screen history and culture.  Always working as a team, they have dedicated their lives to experimenting with colour, light and sound, maintaining a ‘pure’ approach to cinema that eschews narrative, exploring instead the abstract and the poetic. While In This Life’s Body is a formal departure from this approach, it does practice a certain ‘pure’ approach to both image and sound and they did again work as a team. Freda Freiberg however notes that the film is  “clearly marked as ‘Corinne’s film’, rather than a ‘Cantrills’ film […] by the unusual emergence of the first person singular pronoun – ‘I’ – which gives way at moments of reflection or emotion to the third person feminine singular – ‘she’ in the voice-over narration.”2

Corinne’s narration moves constantly between experience, observation and the unknown, unreliable places in-between. It is punctuated by silences, but there are no added atmospheres, sound effects or music to fill those silences. It is a stark and visceral approach, directly reflecting her experience as she worked to examine her life and take control of healing her body. She questions the authority of doctors and their power over “women’s erotic bodies” and turns instead to alternative therapies and the power of the creative process to heal, both physically and emotionally. In refusing to seduce us with sound effects or music, she places us in the room, beside her, as she examines and analyses the photographic records of her life, starting with the first known pictures of her as a newborn. She says: “I wanted to trace the story of my life through all the photographs I could find.  I borrowed my childhood photos from my parents, and these were a revelation — they told me so much about myself and my childhood. I had not expected mere photographs to be so ‘telling’. They were a trigger to memory, many forgotten experiences re-surfaced.”3 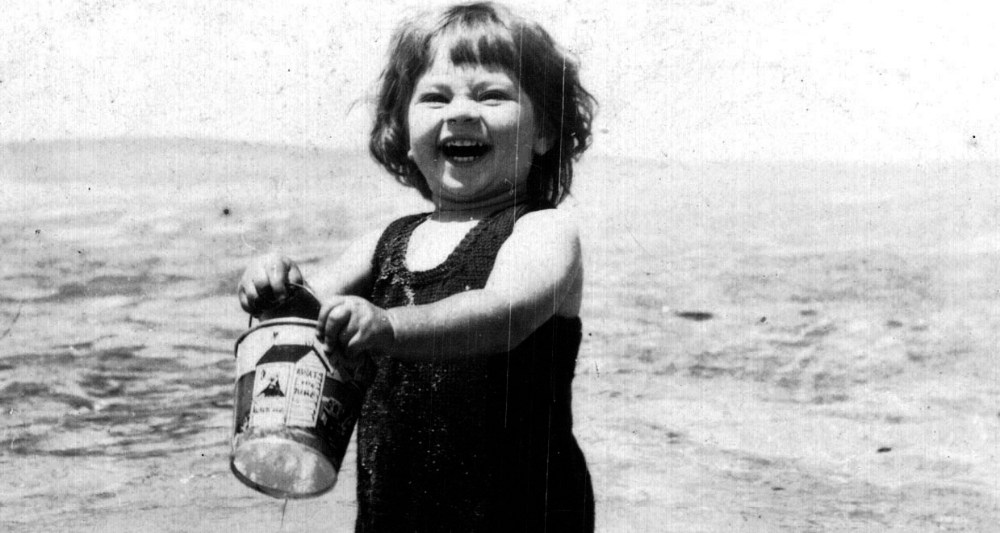 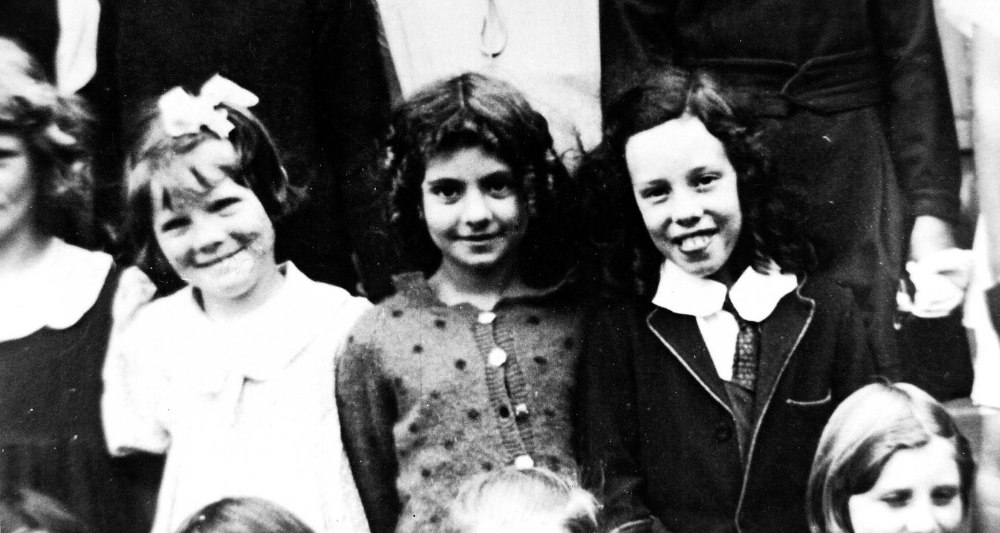 There is very little moving footage in the film and the black-and-white photographs appear chronologically at first, then grouped together much as they might appear in a family album. “The photographs are separately projected onto the screen like slides, with intervening fade-outs to black leader. They are not panned over, tracked into, zoomed into and out of, in the way photographs are usually filmed. In this way […] they retain the essential nature of still photography.”4 Later the photographs are collaged together, often mixing periods, and images are often repeated, sometimes to fill gaps when she was frustrated by lack of documentation for a particular period or event, but sometimes to place photographs from different periods next to one another in order to compare and analyse them. She writes: “Although there were not many photographs to work with, my background in avant-garde film suggested the approach of extended repetitions and variations of the image – material on hand could be worked and reworked to virtually any length.  I did not want to do a conventional archive job…”5 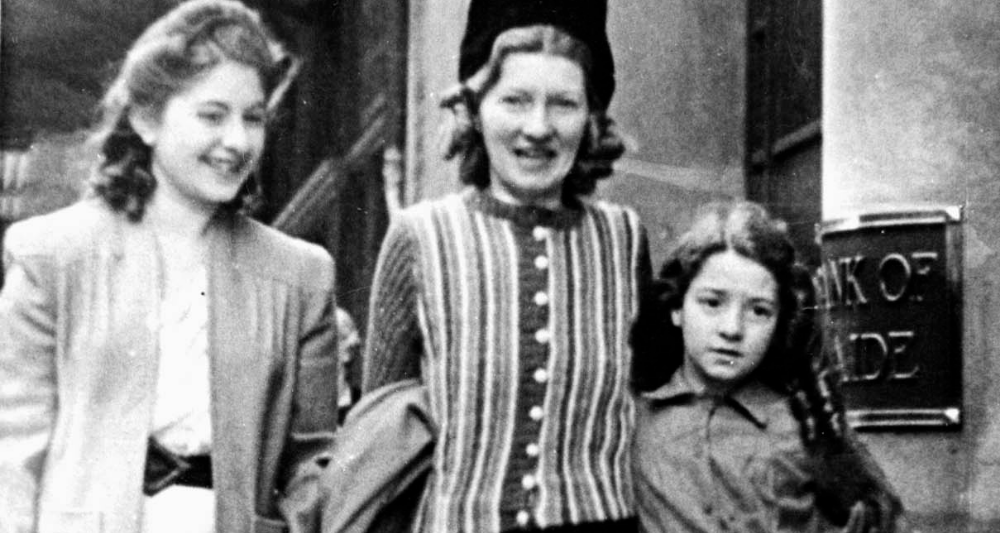 Corinne Cantrill (left) with her mother and younger sister 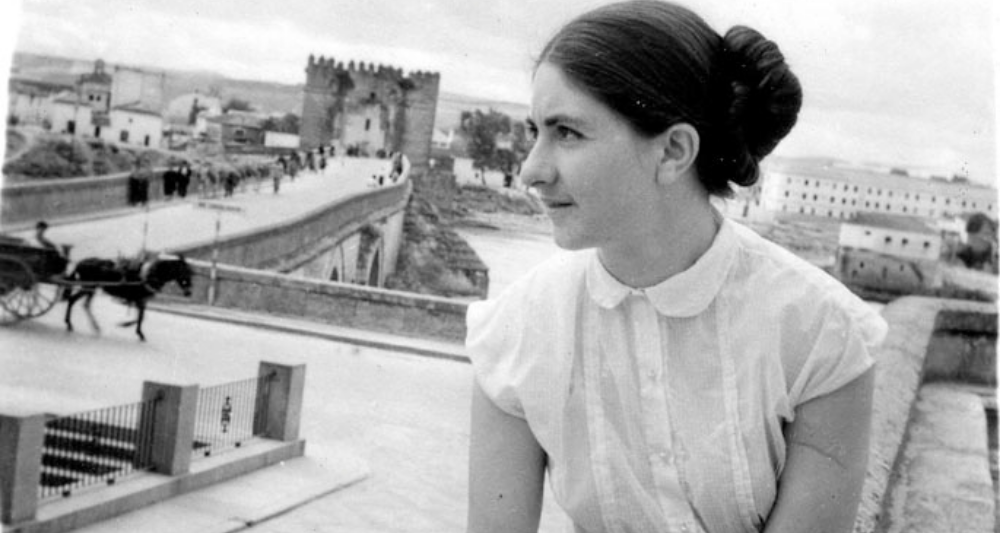 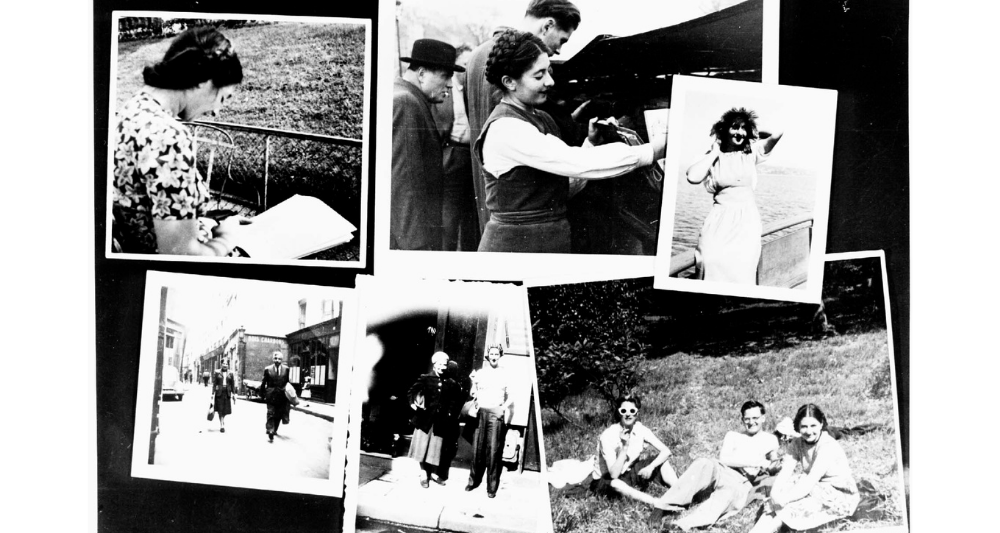 She traces her childhood and the difficult relationships within her family; her overseas travels as a young woman; her relationships with men; her children; her work as an avant-garde filmmaker with Arthur; and her work to teach their autistic son, Ivor, to speak. She interrogates her memories, questioning everything. “People have commented on how frank I am about my life, but this is not really true.  Where the film appears to be open and frank, it is only in what can be told, but behind that story lie layers of disturbing memories which are not for public consumption”.6 She ends the chronology with her naked body, this time with self-portraits in a mirror. She says “In telling this story the emphasis has been on the events on my life, my work and travels, but I fail to speak of the sensory and sexual life of the body. Whatever achievements I have had in my work, they are not more important than the powerful experiences of the bodily senses”.7

In the final section of the film, which works like a coda, she places images of herself at different ages alongside images of her parents and her grandparents, at the same age, searching for connections, physical likeness, learned behaviour and genetic inheritance. She allows the silences to linger as we look at the photographs with her and reflect. “Was my grandmother a strong-willed child like me?” “How have I been marked by the family I grew up in?” 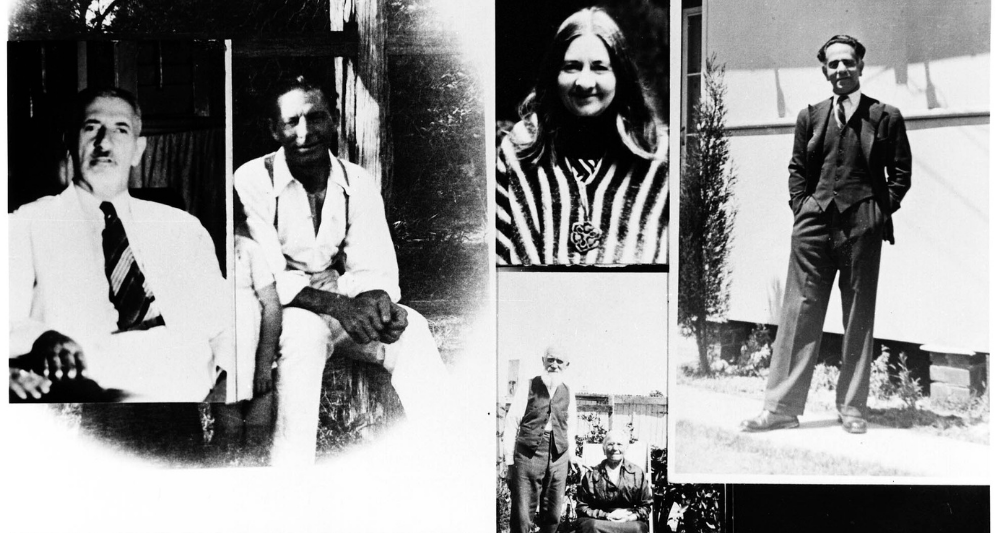 I was astonished by these long spaces for reflection and by her insistent questioning, for in our too fast consumer culture our attention spans have become shorter and complex problems are rarely allowed the space to be explored from so many different angles. The film finishes where it began, with a return to the silent, slow-motion, black-and-white images of Corinne lying naked within the landscape, but the “camera negative” images have now been reversed and are “positive.”

The narrator’s process of reflection, narration, and self-integration within language [and I include film and video here] is bound to unveil patterns of self-definition (and self-dissimulation) which may seem strange and with which we are not always familiar […] The narrative text epitomizes this duality in its splitting of the subjects of discourse into a narrating self and an experience of self which can never coincide exactly.8

She suggests that this kind of self-writing “opens up a space of possibility where the subject of history and the agent of discourse can engage in dialogue with each other”.9 Watching In This Life’s Body is to be witness to this dialogue and its healing power, for within these “spaces of possibility” Corinne’s questioning of memory, the performative nature of photography, family stories and the photographic “evidence” before her reframes her story, clearing up misunderstandings and creating new understandings. 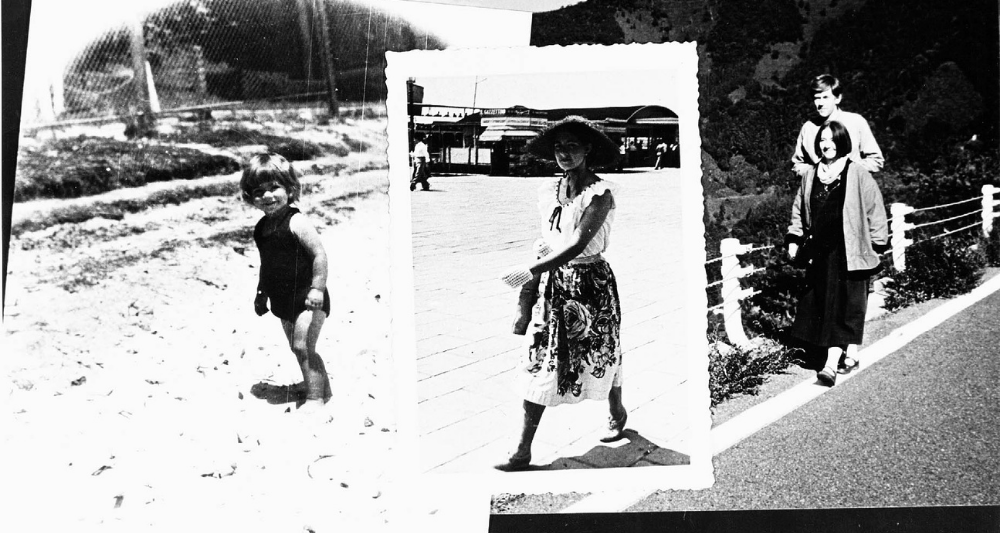 Years later, making a personal essay documentary myself called The Silences,10 about my relationship with my mother, I drew inspiration from In This Life’s Body and experimented with different “narrative voices”. However, not being the main subject of the film, the “splitting of the subjects of discourse into a narrating self and an experience of self” didn’t quite work for me. I was primarily “the agent of discourse” and my mother, who had died, was the main “subject of history”.  How could I have a dialogue with her? In a moment of frustration with the dominant first person narration I had written, I wrote a direct address to her and placed it over a photograph I had taken of her looking straight at the camera. “How insistent your memory is […] I can see you now, lying there in your best blue dress, how powerful you were even in death.”11 I again took inspiration from Corinne by allowing this photograph to stay on the screen for an extended period of reflection, although, unlike Corinne, I did move the camera in one long slow zoom in towards my mother’s eyes.

Corinne’s unflinching curiosity and honesty frames and reframes questions of family, love, religion, sexuality, identity and belonging “meditating on the problems of being an outsider, an intruder in the country one loves.” 12 She unfolds a complex and highly personal story of class, race, family violence, rebellion and bohemia in Australia from 1928 to 1984. It is the story of a young outspoken woman who dared to live according to her desires and imagination. This kind of autobiographical work is always dangerous for women, for it strips us bare and opens us up to charges of madness, self-indulgence and solipsism. But this is how women are conveniently silenced and “power” remains unchallenged. Filmmaker and academic Michelle Citron argues: “The honest autobiographical film or video publicly speaks about the socially hidden […] As a culture, we have been little able to tolerate the truth of the variety of lived experience: that truth threatens the social order”.13

Corinne has lived the passionate and unconventional life of an artist, and tells her story with intelligence, complexity and (at times) a refreshing uncertainty. It is a magnificent film that spoke to me when I first saw it and, years later, when I made The Silences, I drew courage from its extraordinary use of still photographs and narration, and its powerful use of a woman’s wounded body as its premise. As Corinne says of her process: “I try to understand who I am, in this life’s body”.14

Corinne is now 93 and still planning invitation-only soirées and film screenings at their country house in order to discuss big ideas.