A selected filmography appears at the end of this essay.

Leighton Pierce has been making films since 1979, tucked off in the American hinterlands of Iowa, displaced on the cultural map to an imagined blank wasteland, the fabled and terrible Midwest. Recently he has emerged (along with a few other long-term filmmakers, Nathaniel Dorsky and Peter Hutton) into the spotlight, with screenings in NY, lavish press, a little renown. The silence which previously surrounded him doubtless had to do with geography, being far out of the cultural loop of New York, LA, or San Francisco. What the hell is in Iowa? Corn and pigs. And doubtless also to do with the tides of fashion, be they of the arts world or academia: Pierce’s work simply doesn’t fit tidily into any of the theoretical or faddish slots of the past decade or two, and coming from Iowa surely made things twice as hard for him to get a hearing from the cultural commissars out East or West, not to mention farther flung shores.

But show up he has, and while his work is discreet, even in some senses very quiet and subtle, and suffers from also being short (no sprawling 4 or 6 hour opus to call attention to it; no snappy gender bender story, no spectacular actor set pieces, the usual attention grabbers), for anyone with eyes and ears, once seen, it commands attention. Leighton Pierce, without any doubt, is a master, up there with the best of poets, composers, and, with very few companions working at his level, of film/media makers. An extravagant claim, from which I suspect he might cringe. But his work attests to it.

Pierce makes shorts – some 34 since 1979. He is, for sure, a miniaturist – with nothing pejorative intended in saying so: he works in a limited scale, and refines it to perfection. First in 16mm, though quickly including video as well, and perhaps one might in this work place him in some structuralist realm, certainly a recognisable, prominent aesthetic the time he began. But unlike those who worked this vein in dry and desiccated manners, Leighton’s structuralist sensibilities seem more rooted in music, more an attention to organisation and order, to rhythm, to motifs and recurrences, to the stuff of which song and poetry are made. These are scarcely academic exercises. And where they really begin to sing they are tied to reality, imbedded in real life: while like any great artist being thoroughly attentive to and respectful of the medium at hand, Leighton’s real subject is childhood. And one finds in his work a leap when in his life children arrived. One suspects that this was a gradual process of discovery for him, though it is quite visible already in Principles of Harmonic Action, 1991, in which we see the face of an infant, unacknowledged in the credits, though as time goes on the names of his children are listed in the “thanks to.” In Principles, which might in other hands have become a stiff exploration of rhythms, of focus pull effects, and other filmic (though done in video) temporal and visual phenomenon, we instead are seemingly taken through a series of steps, of “seeings,” and obliquely, we are given the impression that this might be how an infant begins to perceive and understand the world. At first a place of unsure images, of light, of blurs, of cyclic cadences, of sounds and visions repeated: a leaf and branch phase in and out of focus, again and again, not mechanically, but as if searching for meaning. The blade of a fan casts a shadow cyclically on a wall, at first seemingly abstract but slowly resolving into substantiality. The child – and one surely senses that Leighton too, taking the viewer with him – is learning. Step by step we commence to see, to grasp the world. But not merely to see, but to see as a child, with a magical sense of wonder, the most simple and ordinary of things blooming into a mystical life, a beauty, a profound “what is,” but in the hands of this artist, done with the most discreet of poetic means, with an extraordinary restraint which allows “what is” to unveil itself, as if we were again children, this becomes revelation.

In a sequence of films from this time on, the presence of these children becomes a near constant, as does a refining of the vision which Pierce brings to his work. While deeply engaged in the most esoteric of cinematographic research (and later in exploring the capacities of digital media), Pierce makes no point of underlining this very complex research, but places it directly in the service of something much more profound and emotionally compelling: conveying, as best one can imagine, the being of childhood, by seemingly slipping inside the mental framework of a child, and constructing a means to convey this to the viewer.

What makes this work function in its extraordinary manner is, I think, the internal tension, unexpressed but vividly present, between the extreme sophistication of Leighton Pierce’s perceptive capacities and his use of the media, film or video, in and of itself, and his ability to embody this deep understanding to convey its opposite: the innocence, the naiveté, the openness of infancy and childhood, in which everything is subsumed in wonder. Inside this contradiction, in which a hard learned and innate sensibility for the nature of the filmic (and now digital) media is harnessed to help the viewer sense again that lost capacity for wonder, is where Pierce’s strengths lie. That this is an artistic “trick” cannot be doubted: this is NOT the way in which a child sees and learns; rather it is the way in which an artist of special capacities and restraints can emulate and suggest what a child sees and learns in seeing, though what is given in these works – thanks to experience and skills and a kind of wilful self-negation – is far more than what it pretends, successfully, to be. Which is why I feel comfortable in saying that it jumps up to the highest levels of art, in which the combination of technical skills and comprehensions, and some given “subject” somehow combine to produce far more than either could do on their own. One can see this quality in Vermeer, in Caravaggio, in Uccello’s Battles, in Rembrant’s self-portraits, or in Beethoven’s late Quartets. And one can see it here. That such a claim could never apply to the cutesy stuff of post-modern fashions and whatever it has now devolved to (one can see the sprawling inconsequentialities at any of the burgeoning Biennales littering the arts world), or the arcane theoretical postulates of the academic media-think, goes without question. Such a claim is beyond the pale of such viewpoints, but for a number of these works, I would make this claim without qualm.

Constructed of what seems a single shot, in a backyard; a water sprayer on, children passing back and forth on a swing. In a sequence of focus pulls and invisible dissolves Pierce renders up a childhood summer, its smells, sounds, languid pleasures. Like most of his work it cannot properly be described, working on such deep visual levels that to describe its technical means is to murder it by autopsy.

Yes, it is composed of technical brilliance of the highest order, and this can – by someone (perhaps like myself) technically experienced – be described, but to describe it is to denude it of its real qualities. In the haze and shimmer of a summer afternoon, caught in the refractions of a glass, of splashing water, of heat waves, in the creak of a swing – but most importantly, in the refractions of Pierce’s perceptions, an essence of childhood is poetically compacted into minutes.

A single handheld image of Leighton’s children, sitting on the back steps of a mid-west frame house, seen from behind and overhead. They are dressed in Halloween costumes, and the initial view is nearly indecipherable, a blur of rich color, shimmering, a moving Velasquez. These figures sit, then move, and in a complex and seemingly structuralist manner, they rise, begin to go down a step, are pulled back to sit again, dissolving, fading in and out many times, but with a hidden and complex order, the passage lengthening out, before withdrawing again into itself, until finally, after 5 minutes, released, and the children go into the party where others stand in the distance. Out of a brief flurry of moments Pierce extracts wonder, anxiety, eagerness, beauty, and much more, all compacted in a stunning work which in another realm might stand in for Las Meninas (1). Pierce’s quick technical and aesthetic mastery of digital means is vivid, compelling and mesmerizing, but far more, it is utterly evocative of the children’s excitement, hesitation, pleasure, and wonder at this little backyard picnic. 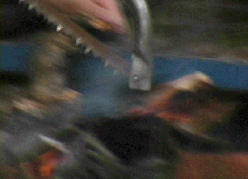 Taking the most simple of things – the sawing of some tree branches in the backyard, a fire, a water hose, a backyard table, and the momentary glimpse of a child’s swing – Pierce constructs an exquisite lesson in seeing and hearing, heightening the seemingly trivial and mundane into an almost painfully beautiful Whitmanesque song to the ordinary, the everyday. The means are an eye as trained as an eagle, a sense for movement, for detail, for color, for use of the invisible manipulations of digital media, coupled to an ear of equal capacity – the crackle of sound, of silence, carefully capitalizing on the control of digital media which is a quantum jump far beyond that of 16mm film, all again focussed on the evocation of childhood. The magical properties of a campfire, of a hose trickling water, of the breaking of a branch, are here expanded with the deepest discretion into matters of almost cosmic import, and yet without a hint of ponderousness, of pretension. Again, Pierce is able to slide deep into a child’s psyche, and to bring, through a thoroughly mature artistry, the semblance of that psyche to the viewer, without a hint of a nudge.

Leighton’s child at a stream in the south of France. Here the sumptuous richness of digital video is brought to an extreme, an impressionistic dazzle which almost overwhelms, the play of light and color as vivid and subtle as Monet, but moving, and richly attended with sounds. Here we see the feet, the hand of the child refracted in rushing water, a blaze of red plant life below; the child’s voice exclaiming “look Dad,” some coins held in a child’s hand dropping into the rush of water. And Dad is certainly looking with an acuity that leaves one stunned, a bit “visually challenged” as in these PC days might be said. My initial reaction to this was a sense that here aesthetic beauty came perilously close to swamping the work, as if it were too rich for its own good. A second look (and then third and fourth – these works grow with each viewing, like all really great art) dispelled that view, and sent me plunging deeper inside, enriched with the subtle grace with which Pierce evokes so much from so little.

I could comment on a handful of other works, later and earlier, but time does not permit. I can only encourage the reader to seek these works out, set aside all preconceptions, and let one’s self be as open as possible. You will be amply rewarded in ways the cinema seldom offers. This is work of the highest order, a poetics of cinema.

Leighton Pierce may be contacted at: leighton-pierce@uiowa.edu. VHS compilation tapes are available directly from him.

(all aspects by Leighton Pierce) 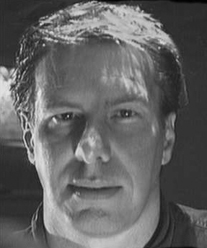