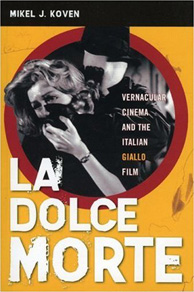 What is an Italian giallo film? Mikel J. Koven’s latest book La Dolce Morte: Vernacular Cinema and the Italian Giallo Film attempts to illuminate this under-appreciated cultural phenomenon and is in fact the first English-language academic study to do so. The term giallo is often thrown about as if it were already some well-established facet of the national canon. As the films themselves will tell us, however, things are not always what they seem. In trying to get to the bottom of this mystery, a researcher might encounter a number of red herrings. References to relevant films in national cinema books are revealed to be throwaway mentions, or else the term is used interchangeably with Italian horror (as in Peter Bondanella’s Italian Cinema: From Neorealism to the Present [1]). The genre’s stylised violence points toward this, but how does the mystery/crime plot figure in this evaluation? We could follow clues leading us toward definitions of the detective film, but these would be troubled by the giallo’s elaborate set pieces and lack of cohesive narrative. The (only) fact is that the giallo is all this and more: a unique nationally-specific hybrid of genres, marked not by its submission to traditional generic boundaries, but by its tendencies to multiply and mutate.

Literally meaning “yellow”, the term giallo here references the cover design of pulp fiction novels first produced by Italian publishing house Mondadori in the late 1920s. Initially, these were mostly translations of crime/mystery stories by writers like Agatha Christie and Edgar Wallace, but it wasn’t long before home-grown literary gialli began to appear. Director Mario Bava is widely recognised as the father of the genre’s cinematic incarnation and Koven offers both Bava’s La ragazza che sapev troppo (The Girl Who Knew Too Much, 1962) and Sei donne per l’assassino (Blood and Black Lace, 1964) as texts which establish and fix in place the textual conventions of the genre. Koven looks at a wide range of giallo films by more than 25 directors, but he points out in his introduction that the book’s interest does not lie in an auteurist study of this body of work. Rather, his book is an exploration of the giallo from a synchronic perspective with particular attention given to some of the thematic concerns which arise from textual study of these films.

The giallo’s defining themes and motifs are cited with regularity in dedicated exploitation cinema fanzines and journals, and the existence of these critical collecting communities might be held responsible for sustaining interest in these great films long enough for academia to catch up. Nigel Burrell and Paul Brown’s 2005 Giallo Scrapbook magazine introduces the uninitiated with a kind of list: to qualify as a giallo, a film must have at its centre a deranged and perverse character whose killings are both inventive and peculiar; there is some past, primal scene which fuels the psychosis; he/she is dressed to kill – black trench coat and sometimes a black hat, but nearly always black leather gloves; weapons are sharp, the victims are hot and the blood flows, splatters and sprays like you’ve never seen (2). But not always; as La Dolce Morte concedes, this formula is consistently derailed by gialli which do not conform to these parameters.

Koven deals with the inherently complex task of defining a slippery genre like the giallo by adopting the notion of filone, which in Italian means “vein” or “streamlet”, but is used by Christopher Wagstaff in his writing on the Spaghetti Western to denote “formula” (3). Koven works with a synthesis of these incarnations of meaning: “Perhaps, in some cases, what we think of as a film genre, like the giallo, may be a cluster of concurrent streamlets, veins, or traditions – filone.” (p. 6) This enables him to acknowledge and consider the intertextual nature of this body of films in a flexible way without having to commit wholly to a rigid set of defining syntactic and semantic relationships, which helps to account for genre variations such as the unusual rural setting of Lucio Fulci’s Non si sevizia un paperino (Don’t Torture A Duckling, 1972).

The book sets up a particular framework for the discussion of gialli which focuses on their status as “vernacular cinema”, explaining that “approaching the giallo as one would other kinds of Italian cinema…is not productive, as this genre was never intended for the art house, but for the grind house.” (p. 19) Koven takes up Walter Ong’s differentiation between oral and literary cultures to explore how some of the characteristics of the vernacular differ from popular and other cinemas (4). Prefacing Koven’s discussion of the giallo, this vernacular framework cues readers to the formulaic, obvious and predictable characters of such cinema and addresses the viewing conditions and experiences of its intended audiences. This synchronic approach presents fascinating information about indigenous viewing contexts during the high period of giallo production within Italy and Koven draws on Wagstaff’s analysis of prima, seconda and terza visione (first, second and third run) cinemas. Both writers liken the giallo’s terza visione audience to that of a televisual (rather than cinematic) audience who talk, drink, smoke and are mobile during the screening. This is certainly useful for both indicating to and reminding the reader that, with gialli, we are not necessarily looking at classical narratives of cohesion or linear construction, but to something else of cinematic value.

La Dolce Morte presents sound and interesting textual analysis of an impressive number of gialli. Although Italian national cinema is not the focus of La Dolce Morte, some significant connections made in this analysis make valuable contributions to this discourse. Koven suggests that, being based on James M. Cain’s novel The Postman Always Rings Twice, Luchino Visconti’s 1943 film Ossessione may not only be the first neorealist film, but the first giallo too. Chapter 3, “Space and Place in Italian Giallo Cinema: the Ambivalence of Modernity”, begins to map out the locations and settings of giallo films and investigates the roles Italians occupy in these geographical spaces. This chapter also looks at the conditions of the foreigner and tourist within Italy – characters who often assume the role of amateur detective in giallo films. The discussion here of the giallo’s ambivalence towards modernity is one of the chief achievements of the book, because it enables the genre to begin to speak about ideas of “Italianess”. This establishes the giallo as a body of texts charged with cultural value, which are worthy of further academic attention.

Koven is also interested in notions of excess and the set piece, and he devotes chapter 8 to investigating these where the visual spectacles of horror and gore in Italian gialli are envisioned as potential gateways into the sublime. Koven follows with a chapter that posits the giallo as a kind of vernacular poetry. Using Pier Paolo Pasolini’s “cinema of poetry” as a frame of reference (5), the author postulates that the violent and gratuitous set pieces of the giallo actually invite the audience to question the ontology and pleasures of cinema. What the visual cinema of the giallo makes possible is deep reflection upon the complexity and profundity of the image, and it does this in a way which narrative cinema cannot.

What La Dolce Morte fails to do is approach the giallo “at its own level” – a strategy Koven paradoxically advocates in the first chapters. Rather, he adopts the sophisticated and disciplined languages of both folklore and film studies to draw connections between these texts. Additionally, Koven’s dedication to the “vernacular” strategy becomes problematic when we consider the current conditions of marketing, distribution and exhibition of these films. While they may have been initially intended for the grind-house, they are now undoubtedly entering both the art-house and academia world-wide. Glossy giallo DVD box-sets loaded with director’s commentaries and behind-the-scenes featurettes are marketed not to the distracted, mobile audience member but to the contemplative cinephile. The vernacular framework works to limit the kinds of discussion which could potentially surround these films.

Other important (non-Italian) viewing communities who have engaged with the giallo are missing from this inquiry and could be especially important because of how they have, if only through demand and supply, enabled Koven’s discussion. Jeffrey Sconce’s paracinema community comes to mind (6). In fact, La Dolce Morte sits at the tail end of the very process which Sconce describes; the giallo has officially entered / “trashed” the (English-language) academy. The vernacular framework means that the potential crossover between many of these films and canonised art film is denied, condemning them to the vaults of the terza visione cinemas of the 1960s and 1970s. We should see the giallo genre as an active and evolving presence across film history, not only as a tired relic of lower-class entertainment. To repudiate a discussion of the influence of Michelangelo Antonioni’s Blow-Up (1966) on Dario Argento’s Profondo rosso (Deep Red, 1975) is to ignore an important (and fascinating) intertextual connection. Leon Hunt has written that Argento’s work has the capacity to “vacillate between strategies of art cinema and exploitation”, (7) and this could be argued for many gialli, including some of the lesser-seen, like Giulio Questi’s La morte ha fatto l’uovo (Death Laid an Egg, 1968). While the film has garnered a reputation for its supreme narrative difficulty (just as many art films have), its aesthetic brilliance is irrefutable. Starring Bernardo Bertolucci’s “conformist” Jean-Louis Trintignant, the film’s editing plays as a homage to Jean-Luc Godard’s jump cut and each ingeniously-framed, polished shot commands your unblinking attention.

Joan Hawkins has suggested that high culture does not necessarily evoke different kinds of spectatorial pleasures or responses to those solicited by low generic forms:

Not only does Hawkins’ insight problematise the responses of alternative audiences of the giallo who are ignored in La Dolce Morte, but it begins to complicate the audience responses of the terza visione theatres which Koven describes. Italian film audiences have been cinematically re-imagined in films from Divorzio all’italiana (Divorce, Italian-Style, Pietro Germi, 1961) to Nuovo cinema Paradiso (Cinema Paradiso, Giuseppe Tornatore, 1988) and are often depicted as active and mobile spectators. It may be worth considering Italian film spectatorship in terms of national culture, not only class. Much like the Hollywood B-films imported into France which came to be known as film noir, Italian gialli have the potential for re-evaluation by new audiences who are in the privileged position to regroup, reclassify and critically analyse. La Dolce Morte marks the beginning of this rewriting.