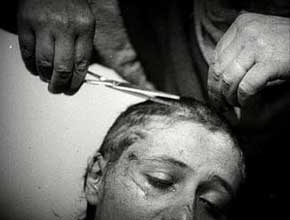 In La Passion de Jeanne d’Arc, Carl Dreyer directed one of the great performances of the cinema and in the process created one of its greatest icons. Maria (Renée) Falconetti is remarkable. On stage from the age of eighteen, she starred in her only film, at the age of thirty-five, playing a nineteen year old virgin. The strength of Falconetti’s performance is such that her name is listed in most standard encyclopedias of the cinema and her performance has inspired artists as diverse as Patti Smith (“You got Balls”) and Jean-Luc Godard (from Vivre sa vie [1962] through to Histoire(s) du Cinéma [1988-97]).

Dreyer’s film is austere and economic. Based on the original trial records, the film begins with the opening moments of the trial and concludes with Joan burnt at the stake. There are no details about who Joan is or what she has done, nor are there any details of her interrogators or their political alignment. The film consists mainly of closeups of Joan and her inquisitors’ faces against a white backdrop. The judges bully Joan with their questions and Joan answers. Yet this is not lazy filmmaking, not the shot-reverse-shot system commonly seen on television. Dreyer finds exhilaratingly original ways to frame the actors, frequently showing only a small part of their faces, and often not even showing their eyes. Many shots have the actors cowering at the bottom or the side of the frame, anticipating what Dreyer would do in his next film Vampyr (1931). The effect is claustrophobic and disorientating. There are never any establishing shots so the viewer never knows where the characters are in relationship to each other. But we know that the all-powerful judges are up and that the all-enduring Joan is down.

Yet it is not the trial which is the central preoccupation of the film, rather, as the title of the film explicitly states, it is Joan’s sufferings (and Dreyer is well known for making his female characters, and the women who portrayed them, suffer). Joan’s pain is palpable and it is said that Dreyer had Falconetti kneel on stone floors until her discomfort was unbearable and that he repeatedly reshot footage (in an act akin to the psychological torture displayed by the clergy in the film) to refine the nuances of an expression. One could see this as victimisation of a performer or as part of the process of creating a great work of art. Certainly Falconetti allowed Dreyer to shave her head, so she must have been a willing subject to some aspects of the creative process. However, many years later, Falconetti’s daughter stated that the reason her mother hadn’t made other films was because she believed the arduous physical conditions she had to endure in the making of La Passion de Jeanne d’Arc were typical of filmmaking. Another anecdote that illustrates Dreyer’s determination to obtain realistic expressions of suffering involves the making of Day of Wrath (1943). Just as Dreyer was about to film the burning of the elderly witch, portrayed by the veteran Anna Svierkier and who had already been tied to the stake for the scene, a meal break was called. The cast and crew left and somebody asked “What about Anna?”, Dreyer’s replied, “Leave her bound where she is until we return.” When the crew returned Svierkier was suitably distressed to play a woman about to be burned.

Dreyer made his actresses suffer so they could better portray their characters. Most of his films deal with the manner in which authoritarian figures, always male, wreak terrible vengeance upon women who dare to come into conflict with the dominant patriarchal system.

Yet, it would be wrong to completely attribute the power of Falconetti’s performance to her acting or the conditions she had to endure. From the opening tracking shot through the court gallery, Dreyer sets the lone Joan against her multiple, sly interrogators. The camera frequently moves when framing the judges, with the men often moving into or out of the frame, disrupting any harmony which may have existed. None of the performers wear make-up and the harsh black-and-white photography gives a sinister edge to the judges’ faces. Rudolph Maté filmed the actors from below, allowing them to tower over Joan and making their gestures seem even more arrogant.

This contrasts with the still, innocent face of Joan, framed from above so that she appears as the hapless victim, her cracked lips accentuating her state of being. Her features are never in shadow. While Falconetti cries, a judge spits. Falconetti’s performance is realistic if anguished, as opposed to the outraged, mannered performances of the remainder of the trial cast. There is however, one exception. It is the sympathetic priest, portrayed by film theorist, scriptwriter and actor Antonin Artaud. He warns Joan and informs the audience of the significance of the judges’ questions. His handsome, soft features contrast with those of the other clerics and he is the only actor filmed without exaggerated camera angles.

The turning point occurs in the film when Joan has her head shaved. It is at this moment that she attains transcendence. She recants the confession that was extracted by the threat of torture and the use of some cheap treachery. This confession had unbalanced the natural order in Dreyer’s universe and just like in Vampyr, the grotesque seem to rule momentarily, even if only as a side-show carnival. Joan becomes empowered and this victim becomes strong, a moral figure demanding great respect as her truth will condemn her. Artaud’s priest appears to look up to Joan and she appears to look down to him although spatially she is positioned on the floor in front of and below him. This reversal is also maintained briefly with the other clerics, until it is announced that Joan will burn. With this declaration, the world literally turns up-side down, crowds riot and women weep. Once again the natural order has been disrupted, but this time, Joan can only be subdued by being destroyed.