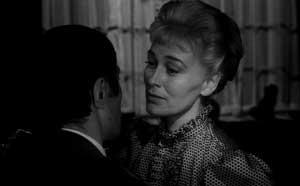 There is no film, no work of art, and no experience in life which does not resist being reduced to words. We have our way with words, and words, in turn, have their way with the world, and the more they accumulate and reproduce on their own terms the more something – often the very thing that spurred the initial speech-act – remains stubbornly unsaid. This intuition of a lost or sacrificed meaning marks the tragic finale to the drama of epistemology: learning that to know is not only not enough but sometimes completely beside the point. But perhaps there is also another (no less tragic) point to our pursuit of knowledge, one that provides us with some consolation for its inevitable disappointment: having it, to hold, whether or not its comfort betters a life.

Carl Theodor Dreyer’s Gertrud, the Danish master’s final completed work, is perhaps his quietest. It contains the heaviest silences, but paradoxically so, for it also happens to be his wordiest film. Dreyer himself said, when asked by a cast member to reveal the film’s purpose or point, that it was about words. One might think that a film about words is a film about nothing because words, if they are not about what they mean, cannot be about what they are. But what if one discovered that a particularly meaningful word, after all the times one had spoken it or written it – trusting it – was incapable of signifying what it refers to, couldn’t keep anything of what could be meant (or promised) by it, and was as weightless as the air (or the ink) expelled in forming it? I think we have all been surprised at one time or another, after or even during an utterance, by the sudden arbitrariness of a word as it stings on the lips, and spreads a wince across one’s face.

Take “love”, the ideal, the 4 letters handled by poets. It is a simple enough word. Anyone can say it and just about everyone will – sincerely, habitually and intellectually. Throughout one’s solitary life it will be spoken many times more than it is conceivable to be stricken. Gertrud herself, middle-aged and bearing a belief in the Romantic conception of love as a total symbiotic soul-bleeding of two bodies, utters the word many times – sincerely, habitually and intellectually. She will speak it to a lover, to her husband and to herself. But each time she says it, or hears it said to her, her idea of it survives: no such word can withstand its terrible burden of significance. This tendency to speak rather than act out one’s love for another reveals what it is we tend to expect from love: the utterance of the word (l-o-v-e) acting to reassure the worry, and sometimes skepticism, over whether or not there even is any love to speak of. Upon hearing the phrase “I love you”, spoken by her husband and to whom she confesses she can no longer love, Gertrud responds with a statement about the vanity of the word itself: “Love – such a big word”. Indeed, it ought not to be just a word; it ought to do more than point to what it stands for.

Dreyer’s cinematic project seems to culminate in Gertrud with a visual or “spatial” definition of human existence: the distance spanning one person and another. This distance, however, is not the empty space that separates objects; it is the effect of consciousness itself, the feeling of being stuck, sometimes bolted down, on the opposite side of one’s efforts to surmount those distances and connect with others. In Gertrud the inner gap between desire and expression is pointedly evident in the futility of language by itself to transcend the external gap between will and the world. Dreyer emphasizes this gap stylistically through a sharp, robust delineation of boundaries. His interiors radiate with a quality of hardness, a feeling of impermeability, that is deeply, immovably immanent. Any attempt to escape or transcend the binding conditions of reality must proceed by way of first accepting them and then learning how to appropriate them. The world is not the blank canvas we might want it to be; nothing is ever exactly like one thinks or imagines it is; and no language guarantees that two people can converge in an intimacy of understanding. Gertrud is experienced enough in life, having suffered her share of love’s disappointments, to know that this is the case, but she refuses to believe that her awareness of these facts must necessarily deprive her of the right to risk believing in the perfection she values. If it is the case that the world is inhospitable to our ideals, then it is a condition of idealism that the only way one can posses an ideal and make a world out of it is by seeking it, that is, by struggling against the current of life as it is typically lived. Gertrud’s “all-or-nothing” striving might strike us as being futile and therefore pragmatically pointless, but it is hardly naïve for these reasons, for no “labour of love” that courts the joys of suffering is not also a “love of labour”. Dreyer’s cinema, more than a testament to this paradox and apotheosis of the human condition, is a celebration of its audacity. The failure to realise a dream in the world preserves a struggle between spirit and matter that primes the body for its possession by the soul. Dreyer’s characterisation of Joan of Arc is perhaps the most vivid instance of this existential martyrdom. In her, the soul longs to be free of a body that longs to endure, raising her soul into the body, dropping her body down into the soul.

Dreyer’s decision to film La Passion de Jeanne d’Arc (1928) almost entirely in close-up, found in the human face what film theorist Béla Balász called a physiognomy of the soul (1). Nowhere else in the cinema have we been offered such a poignant reminder of the place in our being where the exposure of ourselves is as inescapable as light upon celluloid. With Gertrud though, 36 years later, a more ambitious intensity of exposure is reached with the expansion of this physiognomy across the entire continent of the human body. It is with Gertrud that Dreyer discovers how to execute a close-up of the human whole, the body as face, without succumbing to the abstraction – and oftentimes the melodramatic punctuation – of a fragment. It is with Gertrud that Dreyer realises that the relation between a human being and an environment, and that between one being and another, is the farthest point from which a filmmaker can feasibly take the measure of a “face” before losing the event of an interaction to the drama of an event, or, to be sure, quality to quantity. Dreyer’s great discovery here is the cinematic acknowledgement that being and reality participate in an equation of forces: A person is his or her point of contact with the world.

Gertrud is comprised of only nine scenes, eight of which consist of conversations, and of these the majority, certainly the most portentous and probing of them, unfold between two characters in a hermetic, clock-audible silence. But to the extent that a ripe, inimitable sense of the “cinematic” is expected to lie at the heart of a so-called masterpiece, the static, minimalist, and dialogue-driven set-up of Gertrud would not appear to supply it with the most recognizable signposts of cinematic virtuosity. For instance there are none of the overt poetic epiphanies and metaphysical intimations of a Tarkovsky film. But before long, even before one comes to notice Dreyer’s masterful use of deep focus, the long take and the symbolic possibilities of light, a peculiarity in the positioning and angles-of-vision of the characters hints at a purely abstract (I want to say visionary) justification for the choreography. A choreography in consciousness appears to unfold in these rooms – the “rooms” of the mind where thought dances alone.

Is it the mind that comes in between the approaching of bodies, or the body that comes in between the approaching of minds? This much, perhaps too much, is painfully clear: Gertrud and the men who surround her do not, will not, cannot look at each other while conversing. (The expressive exception occurs when glances meet through the mediation of a mirror). What is not so clear, however, is how deliberately or how helplessly the consciousness of a character occurs due to a consciousness of himself. Either way, consciousness is a wall; the characters are walled-up somewhere within their rigorously controlled senses of self, which means that they can only acknowledge another self on the condition that their own self comes first. Just how opaque this wall is, and whether or not there is any possible way (through it or around it) that the privacy of these characters, their “unknownness”, can be made available to others, is Dreyer’s investigation. Gertrud seems to think that there’s a way, but because she thinks so she says so and because she says so she must leave it at that – the reductiveness of words – and can do no more. She has lived a life of the mind, a life of platonic fantasy that is perilously uncompromising, and thus has gilded a dream of love too delicate to be lived unmarred. A idealist like Gertrud might know that the world is not the way she thinks, that it is no place for passion, but she might also know that there is another world in which to live, a world outside of the mind in which to live her dream of love: solitude. Dreyer asks: If people are unbridgeable and love isn’t the bridge, and if to live in the world is to be an island in its vast ocean, should one swim out and risk drowning one’s dream or remain and risk merely dreaming one’s life? The conclusion of Gertrud sheds – in words – such tears of uncertainty.