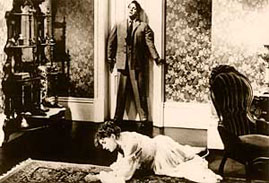 Why does the crime of murder have such a potent clutch on the imagination of all human beings? I freely admit that I don’t quite know, this after years of studying murder from the viewpoint of the dramatist. The fascination of murder and violence for the human psychology is probably inherent. […] Gradually, and at times reluctantly, I have come to the conclusion that every human mind harbors a latent compulsion to murder. (1)

In fact, Fritz Lang (1890-1976) was more than a student of murder – he was interrogated by German police in 1920 under suspicion of having actually murdered his first wife. The death was eventually – and not too convincingly – labelled suicide, but murder, suspicion and legal persecution haunt the director’s subsequent work, and are duly present in House by the River.

Lang, who trained as an architect, made many films with architectural features in the titles: The Woman in the Window (1944), Scarlet Street (1945), Secret Beyond the Door (1948), are and the fascinating B-movie rarity House by The River.

In 1950 Lang was coming off a flop, the aforementioned Secret Beyond the Door. This gothic romance/psychodrama about a deranged architect who may have murdered his wife, and who collects “felicitous rooms” where famous murders have been committed, on the theory that certain spaces preordain the events that unfold in them, was a project close to his heart and for which he had helped develop the script.

As a result of this failure, and perhaps due to his troubled relationships with movie producers, Lang’s stock in Hollywood had now fallen somewhat, though it would later rise again and allow him to make several A-list noirs.

But now he faced a choice between handling subjects less suited to his temperament (like the Technicolor war-yawn An American Guerrilla in the Philippines, which he shot later in 1950) or making his own kind of film – the dark psychological thriller – on greatly reduced budgets. House by the River represents an instance of this latter option.

House by the River is a gothic melodrama, and it marshals its limited resources to create a rich and pervasive atmosphere of decay and corruption, even though the threadbare production values often show. It’s also the Lang film with the strongest camp appeal. Though the director never attempted a comedy, and his work is not generally noted for its humour, here there is an unusual vein of absurdity which infuses the plotting, the performances, the cheap sets, and Lang’s immaculate but overheated mise en scène. It has some of the low-rent madness of Edgar G. Ulmer’s Detour (1945) – it’s Lang’s most Ulmeresque film. Both films feature accidental but felicitous strangulations of inconvenient women, and Lang’s star, Louis Hayward, starred in several of Ulmer’s films. Like Ulmer’s best work, The House by the River comes from poverty and it goes insane almost immediately.

Hayward, exuding fey neurosis, plays an unsuccessful mystery writer who finds himself – as Lang heroes rather tend to do – embroiled in a nightmare of concealed homicide. Attempting to seduce the housemaid, he inadvertently throttles her, and must spend much of the rest of the film vainly trying to dispose of her body and explain her absence, with the unwilling cooperation of his better-natured brother (Lee Bowman). Hayward then, somewhat perversely, appropriates his own homicide as material for a best-selling book, and the possibility of financial profit accruing from the crime is too much for his accomplice’s conscience. And all the while the ceaseless movement of the flooded river threatens to deliver the slaughtered servant back to her killer…

Amid tatty sets (actors practically scuttle sideways to avoid brushing the backdrops and rumpling the sky), Lang presides over a highly stylised, near-expressionistic drama of human corruption and implacable fate. At turns bizarre, hysterical and compelling, House by the River embodies all of its director’s idiosyncrasies, and takes some of his obsessions to ludicrous extremes.

Lang’s lead, Hayward, is a fine, sensitive actor, a South African who had been traumatised by his service in the Second World War. Hayward’s career boasts three macabre masterpieces. In James Whale’s The Man in the Iron Mask (1939), he plays identical twins, and differentiated his performances by playing them an octave apart. “You’ll never sustain it”, protested Whale, but Hayward, a trained singer, proved him wrong (2). In René Clair’s rarely screened and under-appreciated comic whodunit And Then there were None (1945), he’s a perfect light leading man, whose glib charm remains unsullied by the audience’s belief that he’s recently slaughtered an entire African tribe. He’s that kind of actor.

Here, under the eye of another master of the macabre, a wayward Hayward twitches and overplays like Vincent Price on speed, but the terror you see in his face is real: he was petrified of Lang, who persecuted his entire cast without compunction, creating a poisonous atmosphere on set which seems to seep into the celluloid of the film itself. Lang may have intended this exact effect, though it’s hard not to suspect that his behaviour would have been just the same if he had been directing Herbie: Fully Loaded (Angela Robinson, 2005).

Despite the low budget and quickie schedule, House by the River is often visually arresting, displaying Lang’s genius for composition and cutting. As his biographer Patrick McGilligan writes:

Light splashes off surfaces, moonlight spills through frosted windows, the wind riffles the trees and curtains. Everything in the film is dark and shiny and foreboding. Scene after scene shows the director at the height of his ingenuity – working out of the depths of his own despair. Lang’s direction was never so lush or smothering. (3)

The resulting film is flawed, but its flaws are Lang’s own, and fascinate just as much as the more successful sequences. House by the River may not be one of the very best of Lang’s American films, but it is perhaps the most characteristic, showing all his obsessive themes and stylistic mannerisms at their most florid and intense. The film is seldom screened, and any chance to see it should not be missed.