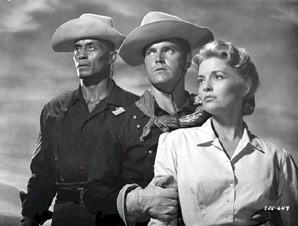 In subject and reception both, Sergeant Rutledge, a frontier courtroom drama about a black cavalry soldier charged with the rape and murder of a young white girl, stands out as an anomaly in the career of John Ford. An attempt to encompass the black experience within Ford’s traditionalist vision of the cavalry, the film’s faith in the dignity of military service – hardly a timely message for a black population beginning to simmer with revolutionary anger – was as unfashionable in its own day as its stolid racial stereotyping is in ours. Consequently, Sergeant Rutledge has often dropped out of sight when considering Ford’s oeuvre, its thematic shifts distancing it from the body of his “classic” work while simultaneously not going far enough to align with the more “enlightened” perspective we now supposedly profess.

This neglect is doubly disappointing, not only because it overlooks Ford’s remarkably incisive understanding of how the machinery of racism functions within both minds and institutions, but because it assumes that the best of Ford’s work thrives in ignorance of such considerations. Rather, despite the flaws, contradictions and blind spots inherent in any artistic vision, the very strength of Ford’s artistry endows the pressing racial theme with a wholeness, a reality which contrasts sharply with the platitudinising distortions of the merely well-intentioned. Sergeant Rutledge is not “progressive”, it is expressive – its maker’s power as an artist allows it to transcend racial and ideological divides, to address a human reality within the human dimension.

With an effortlessness which belies the film’s clunky flashback structure, Ford deftly traces the manifestations of racist fear in societal life, from the knee-jerks of the subconscious (“It was as though he’d sprung up from the earth… from a nightmare”) to the self-deceiving rhetoric of the political establishment (“Incidentally, I’m glad that none of you gentlemen has mentioned the colour of the man’s skin”.) And in the snide, officious prosecutor’s attacks on Rutledge’s character – discrediting the sergeant’s courage in battle with the rejoinder “Bravery is your stock in trade, Rutledge… rapists and murderers can be brave too, if the occasion demands” – Ford shows an establishment willing to undermine its own cherished ideals in order to expel this Otherness from its midst. The code which Rutledge so vigorously upholds is turned against him, its representatives eagerly labelling him “rapist”, “murderer”, and finally – the indisputable proof of his guilt – “Negro”.

The striking clarity with which Ford details the psychopathology of racism indicates how closely this theme lies to his concerns. What else is this implicitly sanctioned hatred but another facet of the blindness and inhumanity of American institutionalism which Ford so passionately condemned? And what else do we see in Rutledge’s imposing strength and the fierce loyalty of his all-black regiment but a further dimension of Ford’s thematic counterweight: the power of imagination which enables individuals to transform a conformist hierarchy into a vital, independent community, a means for their own self-definition and dignity?

In the film’s most powerful scene, Rutledge, viciously interrogated as to why he returned to his troop despite the certainty of arrest, rises from the stand in anger and tears: “It’s because the Ninth Cavalry was my home, my real freedom, and my self respect. And the way I was deserting it, I was nothing but a swamp-running nigger! And I ain’t that! I’m a ‘man’!” A man, not just a soldier. Rutledge’s fealty to the cavalry, and by extension the government, does not result in a subjugation of the self. Rather, he imbues the uniform with the strength of his own inner conviction, makes it a part of his own self quite separate from the ideological loyalty it denotes, just as his proud, orderly march into the courtroom in shackles is at the same time obedient and defiant. Through a profound act of recreation, the black soldiers of the Ninth Cavalry establish their own culture, their own world within the confines of a prejudicial system. (“We ain’t fighting the white man’s war. We’re fighting to make us proud”.) And as Rutledge is their “top soldier”, their pride and their ideal, he is transformed in their eyes into the living incarnation of the legendary “Captain Buffalo” – a trademark Fordian instance of creative myth-making, of iconography emerging naturally from the agency, imagination, and pride of his people.

Despite the enduring power of Ford’s humanist vision, there is an obvious problem with a white, conservative director attempting to reconcile black pride (and black sexuality) with the authoritarian system of the white-controlled military. The habits of an artistic lifetime could not so easily be reordered to incorporate realities which had been neglected for so long. Yet while Ford cannot illustrate the inner lives of his black soldiers as he could those of his white, he knows how closely allied the urge for black emancipation is to the utopian dreams of his white settlers. “It was all right for Mr. Lincoln to say we was free. But we’re not! Not yet! Maybe someday!” lashes out Rutledge; “It’s a good land… maybe not now, but like Rutledge says, someday”, echoes his WASP counterpart. The hopeful future envisioned in Ford’s westerns had always been weighted by an apprehension of the divisive forces which could rend that dream apart, and it would be difficult to conceive of a force more destructive and base than racist hatred. It is to Ford’s credit that he not only sought to explore this hatred – most notably in The Searchers (1956), Two Rode Together (1961) and Cheyenne Autumn (1964) – but to do so within the genre he had made his own. If Sergeant Rutledge can never be entirely “acceptable” to our mandated attitudes, the traditionalism which limits it also allows it to delve further into the social and psychological reality of racism than most American films before or since, while the subject compels Ford to deepen and enrich his traditionalism – to more fully express the doubt, darkness, and blessed ambiguity which were such an intrinsic part of his poetic and harmonious vision.