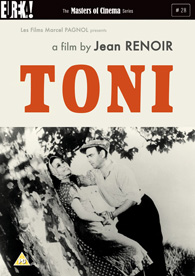 The striking series of DVD releases from Masters of Cinema celebrates an eclectic mix of directors and genres. Cinéphiles should rejoice that there are now such accessible and essential titles providing extended treatments of many pivotal titles from the century of cinema. One of the most recent testaments to this organization’s enthusiasm is a very fine DVD release of one of the rarest films of one of the greatest artists of the cinema.

Toni (1934) by Jean Renoir has been extremely difficult films to see outside repertory and retrospective screenings. Until recently, when film and video collectors discussed their private holdings, they frequently lamented the omission of this title for domestic study. In the Far East, there have been DVD, and perhaps other home-video, releases of this film. But, although the image quality is mostly reasonable, the English subtitles, at least on the Chinese incarnation, rarely resemble anything comprehensible. This Eastern version also lacks at least one establishing shot of a house.

The new Masters of Cinema issue is a fine-looking transfer with the occasional blemish of age and includes new English subtitles.

What a formidable and varied series of films Renoir made in the first decade of sound: La Chienne (1931), La Nuit de Carrefour (1932), Boudu sauvé des eaux (1932), Madame Bovary (1933), Le Crime de Monsieur Lange (1935), Une Partie de campagne (1936), Le Bas-fonds (1936), La Grand Illusion (1937), La Marseillaise (1937), La Bête humaine (1938) and La Règle du jeu (1939). The earliest of these adventurous sound films have urban settings. Perhaps it was as a result of the disappointing reaction to Madame Bovary, set in the middle of the 19th century, that prompted Renoir to seek something totally modern in subject and approach in Toni, far from the romantic atmosphere of Gustave Flaubert’s writing.

Toni was shot largely outdoors at Martigues in southern France during the summer of 1934. This is the antithesis of the picturesque Provence of picture books or indeed Renoir’s later Le Déjeuner sur l’herbe (1959). In his thorough study of Renoir’s films in 1974, Raymond Durgnat quotes the director as striving to “bring the non-naturalistic elements, those which don’t depend on the play or encounters, to a style as near as possible to that of everyday acquaintainship”. Each sequence of the film is a tour-de-force of imagination: Renoir continues his investigations of depth of field and the moving camera and makes painterly use of the natural landscapes to counterpoint the drama. He delights in establishing landscapes from foreground to the distance with his characters weaving through diagonally. The organization of the movement within the frame is breathtaking but never straining for effect or obvious. Like nature itself, these elements flow effortlessly, belying the care and attention that has inspired them. Renoir is often remembered as a humanist, his cinema style difficult to define. There are innumerable imitative examples of films shot in the style of Alfred Hitchcock, Ingmar Bergman or filmmakers who have a specific and identifiable style. But Renoir’s work is all the greater because his style can be elusive and beyond such imitation. His imagination is restless, his personality determined, like Wolfgang Amadeus Mozart, to avoid boredom through repetition of the obvious. No wonder he was so admired by the French New Wave filmmakers. In 1959, he made the charming and colourful Le Déjeuner sur l’herbe but followed it immediately with the experimental black-and-white Le Testament du Docteur Cordelier (1957), shot as a television drama.

In many a cinéphile’s opinion, the 1980 book on Renoir’s French films by Alexander Sesonske is the most authoritative. Certainly the chapter on Toni is a fund of information not only about the film and its production, but also the political and social elements that created the circumstances of the narrative. World War I left France without a huge part of its workforce, so three million foreign workers from Poland, Italy and Spain found employment in heavier industries and the southern farms. The inspiration for Toni was a newspaper story noticed by Jacques Mortier, the Commissioner of Police in Martigues, a boyhood friend of Renoir’s and a novelist. The real crime of passion from which the screenplay developed happened some years before the time in which Toni is set and the time period was compressed for dramatic reasons. Because the film was produced near Marseilles, Marcel Pagnol offered assistance, but his own famous tales of local life in the this region, Marius (1931), Fanny (1932) and César (1936), are romantic and theatrical compared to Renoir’s drama made immediately after. It is an unintended irony that Pagnol’s characters have to some observers become romantic icons set in an aspic of another time. Renoir’s characters are more down-to-earth and endearing.

Toni (Charles Blavette) is a worker from across the border who arrives with many of his countrymen to find employment in the quarries and surrounds. Of course, the drama of the dispossessed could not be more potent. Toni becomes involved romantically with his landlady, Marie (Jenny Hélia), while becoming attracted to the Spanish Josefa (Celia Mantalvén) who is raped by Toni’s boss, Albert (Max Dalban), who finally marries her. Toni nevertheless wants Josefa to leave her husband, just as he will abandon Marie, but tragedy awaits. Everyday life for these people and their community is difficult enough and complicated by a rape, a wedding and a murder to which Toni confesses so that he can protect the real culprit. Through such devices as refusing to allow the cast to use make-up and using the local patois recorded on location, Renoir has created a totally naturalistic community of people who are never sentimentalised but whose resilience has cracks. The cyclical nature of the narrative reinforces the inevitability of the drama and this prefigures such later Renoir masterworks as The River (1951). Of special intensity are the final minutes in which Toni tries to escape his fate by running across the viaduct linking parts of the town. Finally, we can get an overall sense of where these people have been living out their dramas, but it is too late for Toni by then.

For many film commentators of the time, Toni began a new neo-realist tendency in European cinema. Renoir was said not to support this view because there were previous examples of French realist cinema, including work by Jean Epstein such as Finis terrae (1928) or L’Or des mers (1934), while we can also think back to the works of André Antoine such as La Terre (1921) or L’Hirondelle et la mésange (1922). Following Toni, Renoir’s sympathies were with the Popular Front. Some of the films following Toni have a keen social consciousness. It seems no coincidence that, as Luchino Visconti was an assistant on some of Renoir’s later 1930s films, the Italian director’s La Terre trema: Episodio del mare (1948) and Rocco e I suoi fratelli (Rocco and His Brothers, 1960) both owe much to Renoir and Toni, the first for its documentary look at a seafaring community, the latter for its intense melodrama of relocated workers in Milan.

The Masters of Cinema edition of Toni includes some valuable extras prepared in January 2006. In London, Geoff Andrew, film writer and programmer, provides a video introduction lasting for nearly twenty minutes. Illustrated by photographs, Andrew’s discussion highlights the genesis of the film, Pagnol’s involvement, a discussion of the characters, and a generally comprehensive discussion of formal merits of the film and its place in cinema history.

Meanwhile, on a second soundtrack during the course of the film itself, Kent Jones (editor-at-large of Film Comment) and Phillip Lopate (editor of the anthology, American Movie Classics) discuss their admiration for this particular Renoir film. Their dialogue is very insightful, intimate and could be likened to eavesdropping on a warm everyday conversation between two good friends. Their unpretentious discussion covers a lot of territory: the production of the film, the cast and Renoir’s genius, as well as drawing comparisons with such later filmmakers as Abbas Kiarostami, Kenji Mizoguchi and Raoul Walsh. It is encouraging to note the knowledge and experience of these cinéphiles will be used again next year in the forthcoming essential Naruse Mikio releases planned on the Masters of Cinema label.

Finally, the disc is accompanied by a 28-page booklet of articles and illustrations. There are several small pieces by Renoir written at the time of the original release of the film and then twenty or more years later when Toni was reissued. A short interview with Renoir, François Truffaut and Jacques Rivette (1956) is followed by small pieces involving Pierre Gaut and Charles Blavette, who played Toni. Finally, there is a lengthy comment by Tom Milne who passed away while helping with the production of this DVD, and extracts from the press by André Bazin, Georges Sadoul and French writers of the 1930s, as well as later quotes from Jonathan Rosenbaum and Richard Roud.