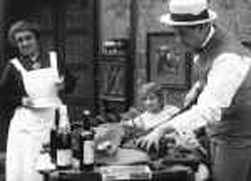 That the art of Mauritz Stiller continues to elude its proper recognition is not altogether surprising. Beyond the fact of the deplorably limited attention paid even by serious students of film to the silent era, his films, which spanned two continents and several genres, evade easy auteurist categorisation while also having no obvious political axe to grind. Stiller does not quite rank alongside the great masters of the Scandinavian cinema – Victor Sjöström, Ingmar Bergman, Carl Theodor Dreyer – but by comparison with their stern morality plays and stereotypically Nordic angst, he ought to speak more directly to the contemporary world. His subject is the uncertain boundary between fantasy and reality, art and life – a theme he examines with a playfulness and self-consciousness that might almost earn the label ‘postmodern.’

If that label is inadequate for a work like Thomas Graal’s Best Film, it’s because Stiller’s achievement is so complex and multi-faceted. He crafted, certainly, a movie about the movies, but it’s by no means an exercise in superficial self-referentiality. It is, in fact, a film of remarkable philosophical complexity, though this should not intimidate any prospective viewer. For while Thomas Graal’s Best Film is a study of emotional alienation, and the relief that art can provide from this, it is also a delightful comedy of manners: witty, graceful, urbane and thoroughly charming.

Thomas Graal is a scriptwriter in Sweden’s young but vigorous film industry, which in the late teens was achieving pre-eminence in Europe largely through the work of one man: the master director Victor Sjöström, whose adaptations of literary classics by such acknowledged greats as Ibsen and Lagerlöf were beginning to earn critical respectability for the new art form. Not that Stiller treats the industry with reverence. His behind-the-scenes snippets of studio filmmaking take a mischievous delight in exposing the rather ramshackle methods of his contemporaries – a satire belied by the subtle artistry of Stiller’s own direction. Sjöström himself is cast as Graal, in an engagingly self-mocking performance which light-heartedly spoofs his status as Sweden’s great film artist, revealing him as vain, stubborn, pretentious, but curiously likeable.

In the opening scene of the film Graal quarrels with his secretary Bessie, played with characteristic vivacity by Karin Molander. She walks out on him, in a fit of pique, leaving him to find solace in his work. His love for her had been the source of his writer’s block – now, her rejection stimulates him to further creation. Swiftly he concocts a script from a fictionalised account of his relationship with Molander, casting himself in a distinctly heroic role as her rescuer from a brutalised and deprived childhood. In reality, she is endlessly spoilt by her wealthy parents – still, the fiction accomplishes its purpose. Graal sells his script to the production company on condition that Bessie play the female lead opposite him; the lovers are reunited; and thus, through cinema, Graal achieves success in both professional and sexual fields.

Art, for Stiller, in Wings (1916), Erotikon (1920), and Gunnar Hede’s Saga (1923), is the means by which private desires and feelings can find expression. But Thomas Graal’s Best Film goes beyond this, to elaborate what is surely the cinema’s first sophisticated study of itself, its methods and the emotions it arouses. Seven years before Sherlock, Jr. (1924, Buster Keaton), Stiller perceived that the cinema’s primary function, for much of its audience, was wish-fulfilment. The way in which Graal finds romantic happiness through cinema is a metaphor for the role of film in providing a fictive vision of true love, rewards and happiness for a lonely and disappointed mass audience. Stiller was the first man to identify what would remain, not the sole, but the primary function of most popular cinema; in an age when commercial filmmaking has come to resemble more and more the fantasies of adolescence, it seems a function which may outlast any aesthetic concerns.

But if Thomas Graal’s Best Film foresees the not entirely happy future of the cinema, it also displays an astonishingly precise grasp of the young medium’s brief history. When Graal conceives his narrative, the scenes in which the fictional Bessie recounts her unhappy childhood are detailed in intertitles – a purely verbal description – while the intercut images reveal pictorially the cosseted reality of her home life. Later, Graal’s secretary herself reads his script – and now the account of her desolate youth is visually depicted in an imaginary flashback at which Bessie, sprawling in her luxurious bed, chuckles. The ‘childhood’ which Richard Combs describes as “Dickensian” is, more accurately, a fiction out of one of Sjöström’s own melodramas. (1) Stiller films the scene in a style reminiscent of those films: his theatrical tableau, viewing the drama in long shot and without editing, is noticeably archaic, and recalls the methods of four or five years earlier, when both he and Sjöström made their earliest films. At a time when many still regarded the cinema as an invention of primarily documentary value, Stiller revealed an awareness that the medium had already developed its own codes and languages, its own modes of representation, as stylised and as highly wrought as those of the other arts.

Even so, Stiller was, ultimately, a dramatist rather than a theorist. A synopsis that makes his film sound like an exercise in intellectual experimentation gives only half the picture – but then, no synopsis could do justice to the film’s grace, wit and lightness of touch. It is these qualities, above all, which explain why Thomas Graal’s Best Film is, after the best part of a century, still one of the more purely pleasurable experiences that the cinema has to offer.