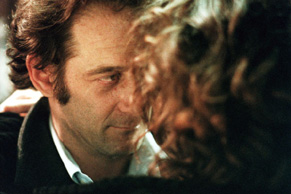 When shooting I get goosebumps because of the passage of time and I have to trust that. But I must say that for me it’s not very difficult: I’m a lazy, passive person who has always adored waiting, watching and listening. Outside of film-making I’m not especially active, I’m like a sponge. (1)

Claire Denis’ greatest films are derived from an accumulation of details, a combination of such elements as precise, often cut-off framing, a tableaux of gestures and poses, surprising but galvanising musical choices on the soundtrack, and a series of explicitly sensual, concrete but ephemerally physical encounters between the human body and its eminently tactile surroundings. Very much in this mould, Vendredi soir is, in essence, a series of sketches, life studies or fleeting impressions placed side-by-side to build a tangible, experiential world. Its story of a one-night stand in a Paris crippled by a public transport strike might seem clichéd, fantastical or even insubstantial, but Denis’ meticulous style (which builds from fragments, glances, gestures, things caressed by the frame) and her emphasis on and preoccupation with experience (the moment, the here-and-now) create an extraordinarily intimate, sensual and felt filmic universe. Although Vendredi soir places both intensely physical and ultimately unknowable characters at the centre of its drama – its tone is so delicate and subtle, at times comic or menacing, that I am loathe to pin it down – it is the fate and actions of their bodies (as bodies) that is Denis’ chief concern. In this difficult preoccupation she is aided by the dexterous but never obtrusive camera of Agnès Godard that gets extraordinarily close to the orbiting bodies of the two central characters without diminishing their inherent unknowability (and it is great to see such a roving, intimate camera deployed within Denis carefully structured compositions on 35mm film). Helping create a film that Amy Taubin evocatively (and accurately) describes as “[a]t once shy and bold, discreet and abandoned.” (2)

Denis’ film might appear slight or even somewhat chaste (hers is a cinema that commonly dances around an encounter) within the sexually explicit trends of contemporary French cinema (or at least the small sections we are able to see of it), but her somewhat whimsical, obliquely unsettling and often comic account of a liberating one-night liaison stands as an acutely observed, physical piece of filmmaking. The film’s emphasis lies less on its sketched-in, emblematic plot, dialogue or even moral implications, than such elements as colour, texture and the visceral sensations of touch, taste and smell (as well as female desire). This is partly made possible by an initial focus on everyday actions and rituals carried from the interior of apartments to the public-private space of the car interior – an instance of this involves the central character, Laure, using her car’s heater to dry her hair. Many of the film’s most exquisite moments frame, ‘isolate’ and caress a part of the human figure encountering and feeling its way towards a glove, the collar of a jacket, the lip of a cup of coffee or an entwined, almost indistinguishable part of another body. Vendredi soir is a film of bodies coming together and pulling apart, attracted by the promiscuity, sensuality and anonymity of the city and rent asunder by the same often-contradictory forces. In this respect, it has something in common with Chantal Akerman’s somewhat cooler (and some may say sillier) Night and Day (1991). This initial description of the film’s accretion of details and always integrated abstraction of forms may make it sound like an experimental film, but its warm focus on the elemental nature of experience (in this respect not so far removed from the harsher terrain of Beau Travail [1999]) is totally in keeping with its dramatic and philosophical emphasis on the existential and elemental encounters that define the human body.

In its ‘architectural’ representation of a playfully nightmarish Parisian traffic-jam, Vendredi soir also evokes the work of Federico Fellini (8½ [1963] and especially Roma [1972]) and Jacques Tati (Play Time [1967] and Traffic [1971]). (The ghostly apparition of buildings – spot lit and looming – is also reminiscent of Roma.) But whereas Fellini’s vision is often subjective, full of grotesque caricatures and monumentally set-designed exteriors, Denis’ extended night-time reverie is a fluid combination of fantasy and reality, engendering both an embodied and disembodied gaze. The long set-piece of the traffic-jam, taking up more than a third of the film, foregrounds the often wilful and in-the-moment qualities of Denis’ film. Rather than provide a plastic, almost abstract spectacle of cinematic space and design (like Tati and Fellini), Vendredi soir creates an intimate, close-up experiential view of events; it literally breathes with the rhythm and awkward gracefulness of its central character. Based on a largely first-person novel, the film casually alternates between an exterior and interior view of events; for example, the first image we see of Laure’s one-night lover (soft-chiselled Jean) is both naturalistically motivated and subtly romanticised. Ultimately it becomes difficult to know how to regard each of the things we see and hear other than as tactile, partly interiorised encounters with an unstable and fluid environment. As Denis suggests, “[a] film is an expandable structure, where space is invaded by the actors. So everything is possible.” (3)

Vendredi soir opens with a series of luminescent, almost symphonic images of Paris, presenting a sea of windows and fast-moving streets. From this explicitly touristic and panoramic opening – suggesting perhaps an almost infinite range of possible subjects – Vendredi soir disappears inside and into the interior spaces that define the movements of its two central characters (and this is a film that is preoccupied with the physical detail of this movement). We are introduced to Laure (embodied by the fascinating, unconventionally attractive, but warmly ambivalent Valérie Lemercier) as she completes packing boxes for the move she is undertaking the next day. Although typically underplayed, the film builds up intimations of the significance of this relocation (to live with her boyfriend) for Laure’s understanding and control of her own identity; for example, she gingerly tries on a sexy dress and contemplates whether to pack or discard it. The first shot of her apartment pans across a series of labelled boxes, establishing containment and interior space as leitmotifs that dominate and guide the characters’ passage through the filmic world (this motif is almost always placed alongside an exterior view that puts this interior space or subjectivity in context). The traffic-jam that Laure will soon enter is designed to highlight the isolation of people within the box-like constraints of their car interiors. But this is not a conventional view of contemporary alienation, or a bucolic symbol of the automobile’s vexed place in contemporary society (à la Weekend [1967]). Despite Denis’ apprentice work as an assistant to such great directors of the ennui of the ‘road’ as Wim Wenders and Jim Jarmusch, Vendredi soir is in fact much closer to the intimate, ambulatory view of inter-relationships offered by Jacques Rivette (with whom she also worked). Thus, the barely moving vehicles of Denis’ film act as a ‘street’ stage for the encounter between people and their surroundings, isolated but engaged, intimate and tactile, where the thin barrier between inside and outside is insistently broken down (the film places much emphasises on the compactness of interiors as well as the locks and windows that patrol any encounter – other than visual – with the outside world). Despite what might seem a rather whimsical and quintessentially Parisian situation, Vendredi soir – like all of Denis’ films – also communicates a palpable sense of danger, risk and violence (wound tight in the taut bodies of Beau Travail‘s soldiers and let loose in the orgiastic flood of blood and gore in Trouble every Day [2001]). The strangers who mill outside Laure’s window can operate as figures of unfathomable desire and fantasy, but they are also flesh and blood beings, uncertain worlds into which she may ultimately merge and collide.

In contrast to much contemporary French cinema (but not to such directors of the fragment and the carefully framed detail as Bresson and Godard) Vendredi soir contains very little dialogue. As an audience we need to look towards and notice other elements, place importance on compositions, gestures, equivocal glances and sounds in a fashion that very few films enable or allow (or give us time or space to contemplate) – in so doing, everything coalesces into an extraordinarily expressive whole. For example, music and sound become increasingly more integrated within Denis’ cosmology to a level where they occupy and map the substance of experience (and like Beau Travail, Vendredi soir can be seen as a kind of dance, a play of synchronised, discordant and ultimately abandoned movements). Much of Vendredi soir consists of a slow, erotic burn, a controlled, intermittent but abandoned embrace; the moments that mark the end of this embrace harder to pinpoint. It is Saturday morning and Laure looks over at her ‘distant’ lover, gauging the distance between them in the forbidding, towering arch of his back. Her subsequent escape into the dawn light provokes an extraordinary image of both renewed commitment – to the life she is about to step into – and abandon (this has much to do with the varied speeds of the image, the grey half-light of the morning, and the extraordinarily controlled and undisciplined way in which Laure runs). A moment of joy and freedom tinged with melancholy emerges, curiously evoking the final moments of Bresson’s Un Condamné a mort s’est échappé (1956). How did we get here, to this moment? Like god, I guess, and much of the greatest cinema, it’s all in the details.