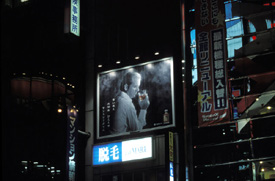 As in previous years, our first issue for 2004 leads off with a collection of lists of the best films of the last 12 months, by a wide range of cinephiles and critics. We’re honoured by the unprecedented number of writers who took up the invitation to participate in this year’s World Poll, and since we’ve not been able to print all contributions in full, would like to thank doubly everyone who gave us the benefit of their enthusiasm, knowledge and insight.

While it’s likely that by this point in the year readers will already have encountered numerous “best of 2003” lists, we feel our own compilation still serves a useful purpose, particularly in drawing attention to little-known or undervalued films. Of course these lists, along with others, also provide some information about the collective tastes of a loosely defined cinephile community – even if it’s unclear how far such tastes are really a matter of free, autonomous choice. On the one hand, each contributor presumably has a different pool of films to choose from, depending on country of residence, access to imported DVDs, festival attendance and so forth. On the other, it’s questionable whether those films which do recur on list after list – mainly English-language star vehicles such as Mystic River (Clint Eastwood, 2003), Kill Bill: Volume 1 (Quentin Tarantino, 2003) and Lost In Translation (Sofia Coppola, 2003) – are really the “best” in any meaningful sense, or simply those which most successfully combined cinephile appeal with market penetration.

But rather than lamenting the corruption of aesthetic principles by “external” factors such as the economics of distribution, it’s probably better to acknowledge that film culture, like art and criticism generally, belongs to the real world in all its messiness and impurity and not to some separate, higher realm. If you care at all about cinema, listing your best films of the year means saying a great deal about your particular station in life, its opportunities and limitations; it also means taking up moral and political positions whether or not these are consciously recognised. This is true even (or especially) when it comes to a movie like Lost In Translation, which seems almost deliberately to avoid “big issues” in its close-up focus on a pair of quirky, isolated individuals. Yet the polarised critical discourse on the film suggests that our response may depend less on any pseudo-objective assessment of “craft” than on how far we sympathise with the film’s characters; and this in turn is a function of broader, hard-to-articulate beliefs about sex, class, age and ethnicity and how these may be acceptably represented.

Locally speaking, I caught a glimpse of similar fault-lines recently upon reading Olivia Khoo’s review of my favourite Australian feature film of last year, Japanese Story (Sue Brooks, 2003), in the arts magazine Realtime. I was particularly struck by Khoo’s discussion of the film’s central sex scene, which she ridiculed as “laughable and completely unerotic” in its “feminisation of the Asian man” (1). In its fusion of political disdain and personal revulsion this statement provides a good illustration of the mixed, complex impulses that lie behind even the most straightforward aesthetic judgements, though as it happens I found the scene in question exciting and in some ways radical. Boldly, Brooks’ film presents its characters more as allegorical emblems than rounded personalities, leading us to ponder our own investment in particular kinds of fantasy; as the last words in the film spell out a Japanese character’s romance with an idiosyncratic version of “Australia”, it’s suggested that the act of projecting private fantasies onto others can be life-giving as well as destructive. Perhaps it would be useful to keep this moral in mind as we ponder the “fetishistic” activities of list-making and criticism?

Thanks go to Patricia MacCormack for her priceless work in editing and introducing our special section on perversion, and to POL Editions for permission to print what we believe is the first full English translation of Serge Daney’s important article “The Tracking Shot in Kapo“. Deep thanks, also, to the generous readers who responded to our ongoing call for donations to the site; without support of this kind, we’d find it difficult to go on functioning. On this note, all readers are also encouraged to fill in the survey attached to this issue as a way of telling us more about yourselves and what you look for in our journal. Finally, I have to announce that this year Senses of Cinema will appear on a quarterly schedule.