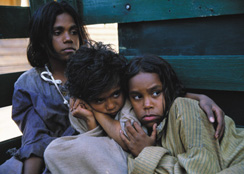 I write to thank Senses of Cinema and Jake Wilson for giving my current book, How Simone de Beauvoir Died in Australia, the kind of serious and extended response of which every writer must dream. I am enormously grateful for this intellectual generosity, the more so since it arises in a climate where very few books of critical writing, coming from the smaller publishing houses, are likely to be reviewed at all.

It’s all the better that Wilson has turned a review into something more, a multiple-perspective essay of his own, bringing to surface the connections between the Woomera event, the video which records and comments on the event, his own viewing position, and my writing on what it can mean to be here, in Australia, at certain key moments. The most interesting reviews are those which serve not only the book or film, but equally the reviewer’s own agenda; when, to call on Beauvoirian-Sartrian terms, the act of reviewing is not gratuitous but authentic.

I am grateful too for the way Wilson brings to bear an acute and unusual understanding of the problems with memoir and autobiography; they’re useful and flexible genres, but they’re taken up too easily for that pursuit of the self which has become so depressingly conventional. At the same time, curiosity about the personal domain is inescapable; from these hybrid tales, in which argument and memoir are merged with necessary fictions, he sketches what he discerns of my life (“youthful rebel, journalist, single mother, activist”). In justice to others, kinfolk among them, I am bound to report that I was never a single mother. A divorced parent yes, but that’s a different story.

In appreciation, I want to acknowledge some of the critical points Wilson has made. It’s true that in discussing the dire contraction of critical journalism since the early ’90s, I have focussed on print and probably, as he says, underrated the growing field of publication on-line. Since finishing the book I have got to know Senses of Cinema and other electronic journals and am very glad indeed of their existence. But with others, I still believe that the printed journal, with its materiality and portability, can contribute to general, non-academic frames of reference in ways not yet possible otherwise; there’s the simple fact that people can see it on the newsstands. I don’t doubt that this is changing. But for the present and recent past, as I noted in looking back at the responses to the bicentennial histories of 1988-9, we’re still looking at unambiguous cultural loss.

Wilson thought I was ‘complaining’ about those exclusions which define the mainstream press; but there’s nothing personal going on, and I’ve no ambition to get these particular essays on to the op.ed pages. I’m rather arguing that given the dominant structures – ownership and control are real issues after all – journalists do pretty well to communicate a diversity of views; quite visibly at times, the most progressive among them use market forces against the market’s interests. I also wanted to show that journalism like that of Jakarta’s dissenting intellectuals presents an important challenge, but there’d be no chance of us taking it on unless – almost unimaginably – we could break out of the present monolingual parochialism.

Wilson credits (?) me with being “politically correct long before the term existed”. Then with the story called “Budgerigars, Or Positions Of Ignorance”, he judges that my exploratory tactics, which he sees as “confessions”, don’t take us far enough into race relations and Alice Springs, the location of the story. He comments that “More could have been done to get indigenous voices on to the page – perhaps through some form of collaborative writing?”

Here it’s Jake, not me, who’s being p.c. He has misread, or under-read, and it may well be my fault; perhaps, by using a fairly relaxed, low-key and anecdotal mode, with the argument embedded in the story, I invited misunderstanding. It’s not for nothing, however, that “Budgerigars” is at the beginning of the book. It’s about as politically incorrect as I can get, since one of its foci is the refusal to know about (some) Aboriginal people what all good left-liberals think they know already.

Before March 1996 many thousands – perhaps indeed millions – of us believed that a certain pro-reconciliation, anti-racist consensus had come into existence. After it, the reality of philosophic conflict on what it means to be here, in this settler society, hit us hard. Moving into the 21st century, we inherit not so much ‘debate’ – that’s for our own amusement – but a cultural landscape fractured by a great political chasm, whose depth we had badly underrated.

For many of us, it’s clearer than ever that an adequate coming to terms with history is at the ethical centre of our future. Since the history is still being lived, that’s where we start in understanding a few things about where we are now. ‘The page must be read before it can be turned’ – so in living and writing this story, it was important to acknowledge genuine strangeness and foreignness, and not to pretend that the gulfs of difference and incomprehension between cultures, languages and life-experiences don’t exist. (And with less than two weeks on the ground of Alice Springs, getting “indigenous voices on to the page” was – even if not highly patronising! – far beyond the bounds of possibility; the point is to understand why.)

In this story, varieties of ignorance are sketched – that shown in everyday racism, then that of the lady in the VIP tour who thought the Anangu women “chattering away in their own language” were “gorgeous (…) just like a flock of budgerigars!” (I now divulge that this person, left tactically unnamed in the story, was Mrs John Herron, whose husband was the Howard government’s first ill-chosen Minister for Aboriginal Affairs.) The significant ignorance is that of the urban left-liberal traveller, who of course finds the others almost unbelievably crass, and who enters the scene with her own “headful of information”, drawn from countless feature articles and TV current affairs.

This is not “confession” at all, but ethical exploration – the same kind that Wilson himself is doing with the Woomera video and the fact of the breakout, considered from a place in front of a screen hundreds of kilometres away in Melbourne. It is like what Jean-Luc Godard did in Far from Vietnam, Les Carabiniers and Le Petit Soldat; and the affinities are worth noting, seriously. We can be a long way from the action in every sense, but the action is still our business, and we have to ask how.

That question is linked to another which I raise in the story, about white liberal Australia’s relation to Aboriginal art production and its marketing: can our patronage be more than “a painless way of showing which side we’re on”? In “Budgerigars”, I describe two paintings, and the circumstances of buying them; I’ve bought several more since then, and I find the question continuing to press.

There are different, but related questions arising about our positions as audiences when we watch Beneath Clouds, One Night the Moon, and – differently – Rabbit Proof Fence. Watching, we are involved, each time, in an extraordinary encounter between the subjects of radically different histories.  As with nationality, there’s nothing simple about this, nothing self-evident – and nothing conclusive.  We have as yet no right to conclusions; we’re bound to provisionality, to the half-open endings in which every story leads on to the next.  Consider the way in One Night the Moon the loss of the child comes to stand for the loss of all else that could have been, and by that token, both the possibility and the necessity of moving on from the grave.