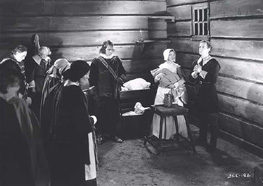 Though by no means the first to play Hester Prynne – there were, hard to believe, at least six adaptations of Nathaniel Hawthorne’s novel prior to 1926 – Lillian Gish managed to shape the 75 year old classic’s protagonist into the image of her own star persona. Veteran screenwriter Frances Marion overhauled the plot and Swedish expatriate director Victor Sjöström – “Seastrom” in the film’s titles – cast the film to complement Gish’s vision of Hester as a girl of “innate innocence…swept off her feet by love…the victim of hard circumstances” (1).

Marion’s adaptation eschewed the “uncinematic” philosophical and crypto-religious elements of Hawthorne’s text. Gone are the lengthy discussions of science and religion with which Roger Chillingworth – the aging husband Hester has not seen since their unconsummated marriage seven years before – torments the Reverend Dimmesdale. Gone indeed is the novel’s focus on Dimmesdale’s psychological struggle, as well as the Puritan community’s eventual unbegrudging admiration of Hester. Gone too, any intimations of witchcraft. In their stead, Gish, Marion and Sjöström created – on a budget greater than those of D. W. Griffith’s The Birth of a Nation (1915) and Intolerance (1916) combined – a simple melodramatic love story.

The most obvious re-imagining of The Scarlet Letter occurs in the 1926 version’s first half, none of which is included explicitly in Hawthorne’s novel. Boston’s Puritans awake on the Sabbath. Hester dresses in lacy white, sneaking a peek at herself in the mirror. The young girl hides behind a knitted wall-hanging which ironically scolds: “Vanity is an Evil Disease”. When her pet bird escapes its cage, Hester chases it through a thicket – Chatsworth California’s sunny but spare and dry Iverson Ranch standing in (improbably) for Massachusetts’ verdure – losing her bonnet along the way, her long wavy hair, now unfettered, trailing behind as her movements imitate the bird’s free flight.

Hester understandably arrives late to the morning services. But for her transgressions (“’Tis against the Law to run and skip on the Sabbath!”) she is thrown into the stocks. It is there, on that afternoon, with her hands and feet immobilised, that Gish’s young Hester still manages to flirt with the dashing Reverend Dimmesdale who has brought her a cup of water. He’s love-struck and even wipes her wet lips with her bonnet’s thin strings.

The two next meet when Hester hangs her just washed unmentionables out to dry. She teases the Man of God: “It would be pleasant, sir, to walk beside thee and hear thee condemn me for my sins”. Soon the good Reverend, his departure as Boston’s emissary to England’s King imminent, asks the girl to marry him. When Hester reveals her marital history, Dimmesdale explodes. Nonetheless, when he returns some months later, Hester, imprisoned, cradles their infant daughter, Pearl, in her arms.

41 minutes into the film the plot finally reaches the novel’s opening chapter: “The Prison-Door”. But unlike Hawthorne’s Hester, who already bares the mark of her ignominy on the jail’s steps, Gish is first led through throngs of cursing, spitting religionists into the village square and only then, on a high scaffolding, dramatically exposes the curly capital “A” placed on her chest. Marion has similarly heightened other scenes. While Hawthorne’s long-suffering Hester has a physician forced on her and her sick child by a jailer, Gish’s Hester takes matters into her own hands – decorum be damned – and bursts into the meeting house demanding Dimmesdale save her “dying” Pearl.

Elsewhere, Gish plays by turns childish, mischievous, teasing and disingenuously naive. She is “a victim”, perhaps, “innocent”, at least on the surface, and “in love”, certainly. But most clearly of all Gish’s Hester is Lillian Gish, the Hollywood megastar, tough but fragile, a girl of 33 going on 16. And her partner in love, played by Lars Hanson, an imported Swedish actor who spoke almost no English, is hardly the embodiment of Hawthorne’s nerdy, introspective academician. Hanson’s Dimmesdale – a classic, blonde (and perhaps a touch overwrought) romantic lead – rescues Hester from the stocks, kisses her passionately by a brook, and flies off the handle when his love reveals her concealed past. Action replaces thinking. Complexity is simplified. And love, even if somewhat sick, triumphs.

Gish called Sjöström the best director she ever worked with; the two, along with Marion and Hanson, teamed up again for 1928’s The Wind. And although Sjöström’s The Scarlet Letter is sometimes clunkier than that later film – the director relies here on frequent dissolves from wide to medium shots (refined in The Wind), and moves extras in a somewhat forced manner (in the opening pan across the village, for example) – there are moments of exquisite staging.