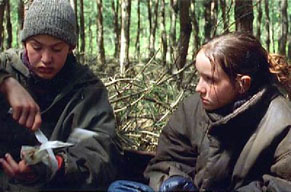 A post-apocalyptic world is never good for anyone, as cinema from the past has taught us. Whether having to fight for gasoline, as Mad Max did in a highly successful trilogy of films, or battling mutant bugs like Jan-Michael Vincent and George Peppard did in the Z-grade, Damnation Alley (1977) – in a post-apocalyptic world, it’s every person for themselves it seems. The Time of the Wolf, a film by Michael Haneke, is no exception. However, you will not find mutant bugs or hordes of chain-wielding bikers in this film. Instead, The Time of the Wolf is a quietly disturbing, minimalist representation of a world gone wrong as a result of an ecological disaster.

Haneke is adept at creating quietly disturbing situations as he demonstrates in his earlier films like Benny’s Video (1992) and Funny Games (1997). These earlier efforts could seem “sophomorically confrontational” to some critics, as the films attempted to puncture the “bourgeoisie bubble” with startling violence and cruelty (1). Both Funny Games and The Time of the Wolf begin with quaint depictions of domestic situations that go horribly awry. The Time of the Wolf is much more melancholy but not as nihilistic as Haneke’s previous films and demonstrates his increased maturity as a filmmaker. The film, though quieter and more introspective than these earlier works, still aims to assault the viewer’s comfort zone.

The Time of the Wolf tells the story of a woman and her two children travelling around a nightmarish apocalyptic world after the murder of her husband by panic-stricken survivors. Little details are given about the nature of the ecological disaster that has befallen the world. For example, we do know that it has poisoned the water, which is the resource in highest demand. Uncontaminated water, the precious life-preserving resource that was previously taken for granted, becomes a commodity to be traded and controlled by whoever is lucky enough to come across it. Using this as a basis for conflict, The Time of the Wolf creates a microcosm and sets out to explore different social systems and political principles. For example, one group of survivors bands together and shares their water and supplies with everyone equally and does not impose conditions, while another makes anyone who desires the commodity contribute in some fashion to the group. The evocations of communism, socialism, and capitalism become obvious, but are nevertheless effective and as a result ask some timeless questions about human nature.

Some may find The Time of the Wolf unrelentingly bleak. A.O. Scott of The New York Times wrote that the movie is “rigorously harsh and its view of human nature as dark as the cinematography, which forces you to discern human features in twilight, deep fog, and utter darkness” (2). The film deals with horrific situations, reinforced by its darkly beautiful cinematography. The use of darkness as a motif, narrative device, and as a means of encouraging meditation illustrates the film’s dynamic aesthetic and reflects the work of a skilled filmmaker.

Haneke resists sentimentality or sensationalism, as A.O. Scott suggests, and sometimes this cold approach may become unpalatable for the audience (3). The stark settings and minimalist dialogue allow the viewer to more fully experience the feeling of loss and desperation, and remind us of the difficulty of articulating emotion after the kind of tragic losses the characters endure.

The most visceral and unforgettable sequence in The Time of the Wolf focuses on a boy’s attempt to throw himself into a bonfire for the overriding benefit of the group. The boy’s desperation and his act of courage are astounding, and Haneke’s skilful creation of images and sounds really makes an impact on the viewer. The crackling sounds of a bonfire score the silent blanket of night, and the darkness and shadows play over the harshly contrasted orange flames. This results in a perfectly constructed mise en scène that allows the viewer to meditate on the significance of the boy’s gesture. A man who witnesses the suicide attempt saves the boy, moved by his courage. He offers words of consolation that seem to ring out in the darkness. This exchange ends the film and acts as a final comment on human nature suggesting that in humanity’s darkest hour there may still be hope. A still image from the sequence has been used appropriately for the film’s publicity.

The Time of the Wolf toys with a sort of phenomenological approach to knowing the unknown, as the characters struggle to understand their new identities that are forged by something horrible. Viewers are provoked to keep asking questions throughout the film; the main characters serving as primary catalysts for the provision of answers. At one point, a character asks of the group, “You mean you really don’t know what’s going on?” The answer is that they and we don’t really gauge the magnitude of what has happened.

Ultimately, The Time of the Wolf is a meditation on human nature under the direst of circumstances. Filled with dark, earthy imagery fleshed out by precise, measured cinematography, the film cuts close to the bone. Also, and despite the grim tone, an element of hope is offered at the end of the film that seems to be absent in Haneke’s previous efforts. The Time of the Wolf is a deeply unsettling, strikingly beautiful film that challenges viewers’ complacency.