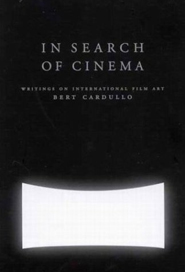 I write about the cinema because I believe that it is the true Gesamtkunstwerk (or total work of art) and therefore has greater expressive capacity than any other art; because I agree with the pronouncement that, as the one technology that can be absolutely humanist in its outcome, which can embody all the technological impulses, cravings, and interests of our age in the employ, not of machinery, but of the human spirit, film was the art form of the twentieth century and continues to be in the twenty-first; and because I think that criticism of film, still the least appreciated of the arts, matters.

“Following Dwight Macdonald is a dirty trick”, wrote Wilfrid Sheed on assuming the duties of film critic for Esquire in 1967 (1). Macdonald, full-time radical scion and part-time film enthusiast, had abruptly abandoned the post for a column on politics. Sheed would later refer obliquely to Macdonald’s defection by claiming that a particularly useless film under review was “enough to drive one to politics”.

No less dirty was Bert Cardullo’s task as successor to Vernon Young at The Hudson Review in 1987. It was Young who had introduced the late Frederick Morgan, founder of the Review, to the novel idea that there was room in a highbrow literary magazine for serious ruminations on an upstart medium, and he certainly proved it for 30 years. It is to his credit that Cardullo made the transition almost painless. However, as we shall see, it was to be a particularly long shadow that Young cast over Cardullo.

As Cardullo points out in his introduction to this collection of his writings, In Search of Cinema, Robert Warshow was “the first American critic to write film chronicles, or quarterly considerations of new movies, as opposed to daily, weekly, or even monthly reviews” (p. 3). Contrary to the opposable thumbs – those interchangeable mass consumption reviewers whose opinions are as tasteless and insubstantial as fast food – Cardullo is in the privileged position to thresh the wheat from the chaff before committing a single word to paper. The result is more timeless than timely: rather than encapsulating the intermittent highs and the interminable lows of week-to-week filmgoing, Cardullo devotes his spacious column exclusively to films of lasting value, and not just throughout the period represented by this collection (1994-2003). In “Part Three: Form, Genre, Oeuvre, and Other Arts”, there are astute reflections on classic films such as Mario Monicelli’s I Campagni (The Strikers aka The Organizer, 1963), David Lean’s In Which We Serve (1942), and Buster Keaton’s The Cameraman (1928).

But the films of lasting merit that were produced during the period encompassed by this collection are given additional resonance in Cardullo’s splendid chronicles: Ta’m e guilass (Taste of Cherry, Abbas Kiarostami, 1997), The Straight Story (David Lynch, 1999), Ni neibian jidian (What Time is it There?, Tsai Ming-Liang, 2001), Eu Tu Eles (Me You Them, Andrucha Waddington, 2000), La Stanza del figlio (The Son’s Room, Nanni Moretti, 2001), Sous le sable (Under the Sand, François Ozon, 2000), Kadosh (Amos Gitai, 1999), Rosetta (Jean-Pierre and Luc Dardenne, 1999), and Wo de fu qin mu qin (The Road Home, Zhang Yimou, 1999). Cardullo is also reliable for shedding welcome light on otherwise overlooked films like Hans Petter Moland’s Aberdeen (2000), as well as numerous films by the Iranians Jafar Panahi and Majid Majidi.

Cardullo also offers a refreshing change from the politically driven criticism of J. Hoberman, Godfrey Cheshire, and Jonathan Rosenbaum, to name only the most brazen. It was only occasionally that Vernon Young let his politics slip, and they were decidedly reactionary: “Socialism is where Europe goes when it dies” (2). Cardullo does let fly with a riposte of his own in “Wooden Allen, or Artificial Exteriors”, an essay I will return to shortly. Astonishingly, he managed to fit it all into one sentence:

Unlike a host of American movies in which the citizenry’s blindest self-satisfactions with the status quo are upheld, or in which the most immoral and fantastic projections of callow romanticism, spurious religiosity, or miserable sentimentality are indulged, these films [Bonnie and Clyde (Arthur Penn, 1967), Mean Streets (Martin Scorsese, 1973), and Badlands (Terrence Malick, 1973)] insist on writing down contemporary American society as they see it: a society alarmingly animated by powerful minority factions that are debased and selfish when they are not downright criminal; that is grotesquely peopled by a fringe of parasites surrendered to listless perversions or violent exploitations, or alternatively populated by a growing number of decent yet subsocial creatures who lead unexamined if not unworthy lives; that is forever encumbered by a floating majority, pitifully bewildered, vulgarized, and juvenile, which is sadomasochistic at its core, hence wanting in all resolution, guidance, and dignity except perhaps in time of war. (pp. 254-255)

This might come across as hyperbole, were it not for the sentence that immediately follows it: “If this is not the whole truth about the American experience, it is that part of the truth most commonly suppressed for public consumption.”

If Cardullo’s politics sound more than a little complementary to Young’s, this should not be surprising to anyone familiar with the essay that contains the passage above. Along with this collection, Cardullo has assembled textbook editions of his own writings (3), as well as The Film Criticism of Vernon Young (4), the definitive collection of all of Young’s far-flung writings on film not included in the single volume published in his lifetime, On Film. Although Cardullo was the logical choice for the job, I remain at a loss as to how or why he found it necessary to borrow freely (and this is putting it gently) from an essay that Young originally published in the January 1979 issue of Commentary, and which Cardullo included in The Film Criticism of Vernon Young on pages 270-279. “Autumn Interiors” was Young’s comparison of Ingmar Bergman’s Autumn Sonata (1978) and Woody Allen’s Interiors (1978), to the ultimate detriment of both:

If, without knowing anything whatever about the work of either director, one had seen Woody Allen’s Interiors and Ingmar Bergman’s Autumn Sonata in the order of their respective debuts in New York City, one might have easily concluded that the Swedish film-maker had attempted to imitate the American: the same photographic and cutting style, the same concentration on a handful of overwrought characters, and the very same subject – namely, maternal domination. (p. 270)

Young was out to satirise Bergman’s “monastic style” as much as Allen’s apparent admiration for it: “That Allen should have been trapped by so obvious an error as to believe that you can depict tragedy by imitating the surface of it from someone else’s version is really amazing.” (p. 277)

No less amazing is that Young’s very words appear in two of Cardullo’s essays included in In Search of Cinema: “Wooden Allen, or Artificial Exteriors” and “Latter-Day Bergman”. And they appear uncredited. Cardullo had published a different version of these essays combined in the Antioch Review in 2000. It was then titled, “Autumn Interiors, or The Ladies Eve: Woody Allen’s Bergman Complex”. Proportionately, only about one-third of either essay consists of material composed by Cardullo. The rest is Young’s essay, carefully rearranged to make up two separate but – needless to say – complementary essays. The obvious care with which Cardullo does this is, of course, in direct proportion to the astonishment it engenders. That some apparent pains were taken to match not only the points of Young’s argument but its very qualities as written English is disturbing. That it has managed to go undiscovered is perhaps indicative of the offhandedness with which so many such books are customarily greeted.

Short of providing a facsimile of all three essays, here is one paragraph from Young’s original (from the collection edited by Cardullo), followed by Cardullo’s essay as it appears in In Search of Cinema:

Allen tries harder – perhaps too hard – to keep his settings from becoming as cluttered as his language, staging crucial scenes at the dining table, in the bedroom, in an empty church, at a beach house, as a means of exiling the everyday world. Self-consciously he employs a camera at rest, passively framing close-ups or middle-distance shots of a static group, except for moments when he is recalling other Bergman strategies: conspicuously, when he tracks two conversing sisters along the beach in a sententious dolly-shot which evokes Persona. (p. 276)

Allen tries hard – perhaps too hard – to keep his settings from becoming as cluttered or static as his language, staging crucial scenes at the dining table and in the bedroom, then in an empty church and at a beach house in an attempt to exile the everyday domestic world. Self-consciously he employs a camera at rest, passively framing close-ups of faces or middle-distance shots of a stationary group, except for moments when he is recalling other Bergman strategies. The most conspicuous of these is the tracking shot of two sisters conversing as they walk along the beach, which sententiously evokes the world of Persona. (p. 258)

In simple bean-counting terms, of the total 107 words in Cardullo’s paragraph, 78 of them are Young’s. And even if Cardullo’s versions are sufficiently leavened with interstices of original prose, it is not nearly enough to disguise the source material to anyone familiar with it (5). But bear in mind that, with only minor differences, these particular essays of Cardullo’s have been in print since 1997 and recast here for publication in 2004, apparently without ever attracting suspicion.

If I admit to taking no personal pride in being the first to point all this out, it is because of the proprietary interest that I take in what I regard is a great American film critic. Cardullo’s immense knowledge of literature, theatre and film has made him an invaluable teacher, literary and stagecraft interlocutor, and – most precious of all – an identifying and celebrating champion of the art of film. As he wrote in his foreword to The Film Criticism of Vernon Young, “He [Young] was one of the great critics of his generation, in any medium, and the writing contained herein proves it” (6). I would write the same of Cardullo and this book, but in my own words.