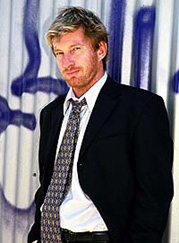 Here in Australia, this month has seen Prime Minister John Howard and his conservative government re-elected with an increased majority, despite widely expressed dismay over our involvement with the disaster of Iraq. With the US election just around the corner as I write, it’s not the easiest moment to stay focused on cinema.

Nor does current Australian cinema appear particularly focused on politics, aside from a handful of no-doubt-worthy documentaries, which I mostly haven’t seen. In the fiction features nominated for this year’s Australian Film Institute awards, political subtext is largely a matter of filmmakers expressing their own alienation through romanticised tales of “outsiders”, rarely looking too closely at the realities of social exclusion.

Indeed, it’s possible that “social realism” in the sense practiced by, say, Ken Loach is a mode for which Australian cinema has finally lost the knack (Khoa Do’s well-meant but amateurish The Finished People [2004] is probably more evidence in support of this claim than against it). If so, it’s an absence which has yet to be filled, as directors at a loss for an idiom struggle to master the codes of postmodern “art cinema” on the one hand and putatively crowd-pleasing genres like suspense or comedy on the other.

A case in point is Alkinos Tsilimidos’ Tom White (2004), which (contrary to some critical accounts) is less a gritty realist account of 21st-century homelessness than a ghost-train ride through a netherworld of everyday devils and angels, a long way after Les Amants du Pont Neuf (Leos Carax, 1991). But while David Field’s leering drug dealer wouldn’t be out of place in a Murnau film, Tsilimidos’ direction lacks the visionary expressionist qualities that might have brought Daniel Keene’s pseudo-poetic script to life.

Looking further afield, a near-exclusive focus on the interior lives of individuals or couples is characteristic of the more interesting low-budget and no-budget Australian features I’ve seen recently, such as Lovesick (Bill Mousoulis, 2003), Dreams for Life (Anna Kannava, 2004), Forever (Ben Speth, 2004) and In the Moment (Paul Jeffrey, 2004). Several of these movies could be described as “political” in different ways – particularly In the Moment, which pays careful attention to the power relations inherent in both filmmaking and coupledom. But whether for budgetary reasons or others, the characters in all of them tend to be wrapped up in their own routines and preoccupations at the expense of any wider picture.

Of course, a very different aesthetic rules in Australian television, which may be insular after its own fashion, but which continues to specialise in semi-realist depictions of functional communities, both fictional (McLeod’s Daughters) and slightly less so (Big Brother). However dubious the medium’s typical strategies and purposes, it’s arguable that local TV’s success in reaching its target audience has to do with its ability to plug into viewers’ sense of themselves as part of a society, something which Australian cinema rarely attempts.

As far as explicit political content goes, there hasn’t been much in this year’s crop of Australian fiction features to compare with Stiff (John Clarke, 2004), the first in Channel Seven’s planned series of telemovies based on Shane Maloney’s comic thrillers about a Labor Party apparatchik. Stiff‘s pointed but affectionate satire might well inspire some nostalgia: baby boomers and sharp wits both, Clarke and Maloney are also shining representatives of the left-liberal humanism which until recently seemed the very substance of middlebrow Australian culture, and which has consequently been the object of relentless attack from the present federal government (most hilariously in Oxford graduate Tony Abbott’s denunciations of “elites”). No doubt, this ideology has its limitations, and has expressed itself more successfully through TV and print journalism than through cinema or, for that matter, the novel. But cinephiles are citizens also – and as such should be alarmed, along with everyone else, at how far the values of equality and genuine multiculturalism are now being sidelined by our mass media.

Viewed in relation to the Australian filmmaking scene as described above, David Barison and Daniel Ross’ self-financed The Ister (2004) is obviously a special case. Appropriately, Carloss James Chamberlin’s extensive discussion follows the film’s own path of philosophical inquiry, bypassing the national context altogether. Among other features of this issue, a brief mention should go to our spotlight on visual comedy, with essays on the general principles of the genre as well as specific filmmakers from Buster Keaton to the Farrelly brothers. In analysing the dynamics of (mis)perception that allow sequences of images to be viewed as comic narratives – asking, in effect, just who or what we think we’re laughing at – the articles assembled here hopefully shed some light on the contested ground where ethics and aesthetics meet.

Special thanks to our volunteers Marc Trabsky, Lucy Wright and Fincina Hopgood, and to all those who have sent us messages of support.