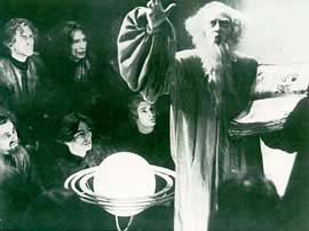 While Fritz Lang’s Metropolis (1927) is generally regarded as a benchmark in world cinema, Friedrich Wilhelm Murnau’s equally impressive Faust is unfairly overlooked in favour of the director’s Nosferatu (1922), Der Letzte Mann (1924), or his American debut, Sunrise (1927). Both Faust and Metropolis were the apotheosis of Eric Pommer’s and Ufa’s overreaching ambition to create an international market for German cinema. (1) Completed within four months of each other, these prestigious productions were at huge cost, featured internationally recognised casts, and were made to demonstrate the technical sophistication of German crews.

The large budgets allowed UFA to purchase innovative equipment and the completed films premiered in UFA’s newest cinemas allowing them to showcase these new venues. However, Pommer had allowed the production costs of these two films to escalate out of control. This was a common strategy in the immediate post-war period of hyper-inflation, but by 1926, when the economy had temporarily stabilised, it was a fiscally hazardous practise that almost bankrupted the company, and ended Pommer’s reign as studio head.

With their huge budgets, it was never likely that the two films would recoup their costs and the lukewarm critical response that they both received on their initial release confirmed this (although both films, particularly Faust, performed well at the box-office in Germany, the US and elsewhere). Faust‘s box-office performance was no doubt aided by its international cast which included the German Emil Jannings (the most readily identifiable German star world-wide at the time) as Mephisto and director Wilhelm Dieterle as Valentin, the Swedish Gösta Ekman as Faust, and the French Yvette Guilbert as Marthe (2). The Swede Nils Asther was originally cast as the archangel, but was replaced by Werner Fütterer, and most tantalisingly, Lillian Gish was originally cast as Gretchen (or Marguerite as she is frequently named in English language versions of the film, returning to Goethe’s key source, Christopher Marlowe’s Doctor Faustus). As Gish had wanted her cinematographer Charles Rosher to make the film and the German crew (probably correctly) wanted Carl Hoffmann, Gish was replaced by the novice Camilla Horn, who had been discovered during the making of Tartüff (1925), several months earlier. Horn’s performance is barely adequate and this is definitely one of the weaknesses of the film; however, her role as the quintessential German virgin, with long blonde plaited hair and clothed in a simple, full length peasant dress, gave her little room for improvisation. This is regrettable as the hardship endured by Horn during the film can be compared to that inflicted by Carl Dreyer upon his actors (3).

Murnau is a very technically minded director and the performances in his films are frequently technical, or stylised, certainly by comparison with the more naturalistic performances in the work of humanist directors such as Ozu or most actors-turned-directors. Although critics and audiences may see these performances as mannered, the result is often intrinsic to the stylised nature of a film, helping create a remarkably organic work. This can be seen in Jannings’ performance in Der Letzte Mann, or Dietrich’s in Sternberg’s films, or with Robert Mitchum’s in The Night of the Hunter (Charles Laughton, 1955). In Faust the performances are inconsistent. As noted above, Camilla Horn’s performance is nondescript, while Dieterle as Gretchen’s gregarious brother gives a set-filling performance. Ekman’s performance has sometimes been described as being too effete, yet, as the elderly naive scholar transformed into the world-weary, carefree dandy, he is remarkably convincing. Jannings’ performance shifts radically, from a towering, seemingly omnipotent creature, created with special effects and lighting, to the pervasive devil, charming, with the impish De Niro grin, and back again. In the scene where Mephisto must distract Marthe, Gretchen’s aunt, while Faust prepares his seduction, Janning’s performance can be said to perhaps contain little subtlety, yet it is no more overblown than the lauded, knowing performances of the mature Jack Nicholson, or for that matter, Robert De Niro. Ultimately a variety of acting styles are on display in the film.

One of the film’s great strengths is Murnau’s skill at unifying and balancing the epic proportions of this big budget film (the crowd scenes, the special effects) with the more intimate moments of the drama, featuring only three leads and a further half dozen supporting roles. In one especially illustrative moment Mephisto and Faust disrupt the wedding of the Duchess of Parma. Mephisto and Faust arrive with an entourage of two elephants and a team of Indian servants, while a celebratory procession of female dancers parades by, watched by the wedding party. These groups of extras, as atmospheric and significant as they may be, are given scant attention, the camera focusing on the actions of the four characters deemed as central to the narrative at that moment. Also, unlike the more intimate Der Letzte Mann and Sunrise, where the camera roams freely, expressing the mood of the film, the camera movement in Faust is more restrained, being better integrated to serve the requirements of the narrative.

The inconsistency of the performances in Murnau’s films later can be partially traced to the director’s attempt to create a universal application for the characters. From The Last Man of Der Letzte Mann, to The Man, His Wife and The Woman From The City of Sunrise, the characters become ciphers illustrating the human condition. The performances are more abstract and less open to individual interpretation and nuance. In the process, Murnau’s Everyman becomes no-one.

In Faust, where the central theme is distilled into the struggle of good against evil, Murnau creates a perfect visual metaphor in his use of expressionist lighting and ubiquitous mists, in what really was the last gasp for German Expressionism. The performers are side-tracked. The film opens in a dazzling crescendo of crashing light and dark as Mephistopheles confronts the archangel. In the first half of the film, where Mephisto tempts and then totally corrupts Faust, the images are frequently darkened, with stabs of light illuminating faces or figures. Murnau borrows Rembrandt’s highly expressive use of light and shadow to manifest the struggle being waged for Faust’s soul. When Gretchen first appears the shading becomes more neutral, infused with greys. But after she is seduced, the earlier, darker code is reinstated. It is only at the conclusion of the film that the archangel’s light and his love-heart shaped wings restore the natural order; although his rationale for redeeming mankind may be based on an opportunistic logic.

One commonly held truth is that it is easier to make a good film out of a bad book than it is to make a good film out of a good book. The traps and expectations are numerous when performing the second of these acts. In Faust, Murnau attempted to translate Germany’s greatest drama, by Goethe, while freely borrowing from Marlowe, as well as the German folk saga and, not surprisingly, Rembrandt’s Faust. Obviously there was a recognition factor that motivated his selection of this much loved classic and no doubt Murnau was also attracted to the universal metaphor of the tale, yet critical and popular comparison with the original written work was always a risk. Murnau’s film will always appear crude when the themes are directly compared with those of Goethe’s two-part work, and Murnau’s performers could not adequately express the depth of the ideas found in the original. Some contemporary German reviews were critical of an over-determined German-ness used to represent Faust’s home town, yet Murnau’s portrayal of a bygone Germany is no different to that created by a number of his contemporaries. Lang’s vision of Germany in Der Müde Tod (1921) or for that matter, his idealised futuristic society in Metropolis, is not much different to Murnau’s Germany in Faust. Perhaps these views of Germany coincide more with a foreigner’s cliché-ridden perception of Germany than with the complex, multi-faceted society that existed at the time, but when dealing in abstraction the distillation of an essence is permitted, even necessary. This is what Murnau does in his film. Through the use of light and movement, and some brilliant special effects, Murnau attempted to create a visual equivalent of Goethe’s literary masterpiece. Murnau’s film may not be as great an icon as Goethe’s classic, but it is nonetheless a cinematic masterpiece worthy of its filmmaker.