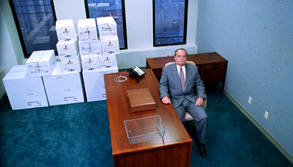 The jazz bassist Marcus Miller once said of James Brown’s music that no matter how small a slice you took of it, that slice contained, like DNA, “the funk in it”. There is such a slice of time in About Schmidt (Alexander Payne, 2002) close to the beginning of the film when Schmidt (Jack Nicholson), after receiving rote testimonials at his retirement dinner from his colleagues and friends, excuses himself from the room while the dinner is in progress to walk over to the bar where he sits quietly and orders, with gravity, a vodka gimlet to drink alone.

The significance of this moment dawns on us later, as every major theme and concern of the film comes to be somehow summarized in this quintessential slice of “dead time”. The bromidic encomia he has been awarded at the dinner for being a good worker, a good manager, a good husband, a good father, and a good citizen, mask the questions: what has he really achieved, and what has his life really meant? The numb blankness of Schmidt’s pasty face is written with what we later discover to be incipient doubt and despair, as he stares at the coaster the bartender has slapped down on the bar, and waits patiently for his drink. Devoid of words or plot significance, it is a quiet moment of “pure cinema”.

Payne has bemusedly said that the film’s Japanese title should probably be “The Cow”. At Johnny’s Café, the not-terribly-ritzy Omaha restaurant where Schmidt’s retirement dinner takes place, the walls are covered with snapshots of championship steers. Payne shows us these photographs, one by one in succession, appending to them a shot of Schmidt in stiff business get-up. Driving his Winnebago across the country, a cattle truck pulls up alongside him on the highway and he locks stares with the big, wet-eyed animals in the trailer for what seems like a very long instant. The climactic wedding scene even begins with an unappealing close-up of a large, red hunk of roast beef. Schmidt’s “officially correct and good” life has also been one of utter conformity, passivity and emotional detachment. At the conclusion of his career as a white-collar beast of burden, his retirement now seems to be the occasion of his slaughter.

Payne provides us with a sobering look at Schmidt’s retirement: the humiliation of being replaced at his job by a young college grad half his age; his boxes of neatly packed file folders, the evidence of his years of productivity, unceremoniously dumped in some store-room, relegated to oblivion; and his rueful reflection that rather than making the cover of Fortune magazine, as he hoped to do, he made only a corner of the Woodmen’s Weekly Bugle upon his promotion to assistant vice-president.

Payne and his co-writer Jim Taylor melded two sources to arrive at the screenplay for the film, the Louis Begley novel About Schmidt (which concerns a recently retired Manhattan lawyer taking a cross-country trip in his Saab to stop his daughter’s wedding) and an unproduced early Payne script called “The Coward”. Tellingly, there is a scene in the film in which Schmidt, driving back from Jeannie’s wedding, stops at a monument in Kearny, Nebraska, to see an exhibit honoring the pioneers of the frontier. The plaque says: “The cowards never started/The weak died along the way/Only the strong survived/These were the pioneers.” The parallel with Schmidt’s own life, in which the demands of work and family and outward respectability turned him into a passive, remote creature, lacking any meaningful actions of individual will, could not be more clear.

About Schmidt‘s crowning achievement is to create a truly affecting blend of two disparate tones: humor and pathos. Despite its grave themes, this is a film of non-stop, painful hilarity. Schmidt’s early letters to his Tanzanian foster child Ndugu drip with contempt for his wife (“Who is this old woman who lives in my house?”), and his candid disgust for her (“I hate the way she smells, and sits”), the latter disclosure followed by extreme, jarring close-ups of Helen’s armpits and her derriere sinking noisily into a sofa. Yet, after she dies, we find him rifling through her closet, smelling her clothes, putting on her facial cream and breaking down while doing so. At first, he is startled and unsettled by Randall’s family (Roberta using her hysterectomy as an icebreaker, Randall’s brother Duncan, with his stoner demeanor and a box of dog biscuits by his plate on the dining table!), but when time comes for him to make his speech at the wedding, he sets his prejudices aside (if only temporarily) to single out genuinely sterling qualities in each of them (save Duncan, who is simply beyond the reach of generosity!).

It has been observed that the film has an invisible, functional style that does not call attention to itself. The actor Dermot Mulroney (who plays Randall) has commented: “Alexander [Payne]’s whole approach to filmmaking is real clean cut. It’s really not swooping crane shots, and you almost don’t notice there aren’t any bells and whistles because he just lets the story and the character carry themselves. It’s a really respectful way to make a movie, and a European way.” (1) This spartan approach makes every stylistic gesture stand out in bold relief. When Jeannie arrives with Randall for her mother’s funeral, we glimpse both of them, out of focus, seen over Schmidt’s shoulder. Jeannie spots her father, rushes to him, looms into focus, and hugs him wordlessly. Randall stays at a distance, out of focus, allowing father and daughter this privileged moment. Later, he steps forward and joins the hug, coming sharply into focus. Similarly, when Helen is taken away by the paramedics after her death, the house is empty and Schmidt is caught in extreme close-up, off-kilter in the frame, leaving a large blob of out-of-focus negative space to occupy most of the frame.

Omaha is also the setting for Payne’s other two films, Citizen Ruth (1996) and Election (1999). Jim Taylor says: “Omaha is Alexander’s hometown, but for me it’s almost like going to a foreign country—you’re finally seeing something you haven’t seen before about your own country. It’s like there are James Bond movies that take place in India, and you still don’t see India. And then Mira Nair makes Salaam Bombay! And all of a sudden you really see India.” (2) About Schmidt opens with a striking montage of a grey and drab downtown evening. Shots of unexceptional buildings, both tall and small, are captured from various vantage points. Somewhere in each image is Schmidt’s Woodmen Of The World insurance company office building. As the montage unfolds, this building appears more and more proximate until we are finally staring up into its concrete maw. The next cut finds Schmidt waiting for the second hand on the clock to mark 5:00 pm and thus the banal end to his career. The film’s style is quiet and economical, but nevertheless eloquent. 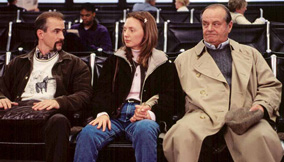 It is deceptively easy to surmise that Payne shares Schmidt’s distaste for the various secondary characters that populate this film. Schmidt’s dislike of Randall, it can be argued, is supported by the unflattering portrait Payne paints of the young man: dim-bulb waterbed salesman with an execrable mullet and the gaucherie to interrupt his father-in-law’s reading of sympathy cards for his dead wife with a request for investment money for a pyramid scheme. Yet, a closer look reveals that Jeannie is not only in love with Randall, but that they seem to be well-matched. Schmidt’s jitters (“this guy’s just not up to snuff for my little girl”) recalls Spencer Tracy’s fretting over Elizabeth Taylor’s impending marriage in Father Of The Bride (Vincente Minnelli, 1950). Even Schmidt’s reminiscences of Jeannie (as a little girl, riding horseback, playing violin in concert, speaking German) are so completely colored with nostalgia that he fails to see that she has moved away from those early interests almost completely. Similarly, the robust Roberta is initially perceived (by us, since we see much of the film through Schmidt’s eyes) as being socially inappropriate, overbearing, and even cruel (the way she brutally cuts off her ex-husband as he is about to make a pre-wedding toast), but we finally come to realize that she is resourceful, generous and unlike Schmidt, full of vitality.

The exquisite ending of the film, in which Schmidt looks at Ndugu’s stick figure drawing of adult and child holding hands, offers him a glimpse of a redeemed life. If his existence has been worth anything, it is because of his role in the lives of two children, Jeannie and Ndugu. Even as an emotionally distant father, he still was instrumental in Jeannie’s existence, and even as a physically distant narcissist, he was able to contribute in a small measure to Ndugu’s healthy upbringing. If Schmidt had done nothing else, it would still have been a life of meaning and grace.