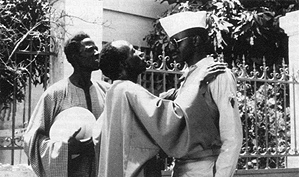 Much of the following material appeared in the Monthly Film Bulletin of September 1989 (vol. 56, no. 668) in a review of Camp de Thiaroye on its initial UK release. The format (analytical plot synopsis followed by a critical review) has been retained from this first version. Obviously reading the plot synopsis and review before seeing the film will dissipate the suspense which, for an audience outside Senegal, is likely to be an important part of the its narrative and dramatic impact. One suspects, however, that the outcome of the events the film depicts is still alive in the Senegalese popular memory, part of the nation’s oral history.

In November 1988 the screening of Camp de Thiaroye, then the new film of the father of Black African cinema, Sembène Ousmane, was one of the highlights of the 32nd London Film Festival. Fortunately, the weather cleared just in time for Sembène to arrive from Rome for the discussion which followed the film, allowing him to reinforce his eloquent producer, Mamadou Mbengue.

Coincidently, the same weekend Sembène’s work was a major topic at a conference designed to discuss and consolidate the teaching of the literature of the Francophone former colonies of Africa and the Caribbean at the universities of the United Kingdom and Ireland. This was held at the French Institute in London. It included a major paper on Sembène’s novels by the Irish critic Fírinne ni Chreachaín, which discussed the attempts by certain segments of the academic establishment to appropriate Sembène’s writings for their own literary ideology, in the process depoliticising their content. There was also a discussion of Sembène’s pioneering use of the Oulof language in the film Mandabi/Le Mandat/The Money Order (1968), in a paper on language in the African cinema by the present writer.

The day following the Festival screening Sembène spoke to this Conference. Armed with the pipe that is his trademark he made a vigorous and informative contribution. Who previously had known about the involvement of de Gaulle’s Minister of Culture, André Malraux, in the negotiations that led to the financing of Mandabi, or of Malraux’s seeing similarities between Sembène’s novel about the great 1947-8 rail strike on the Dakar-Niger line, Les Bouts de bois de dieu/God’s Bits of Wood, and his own La Condition humaine/Man’s Fate?

(All the Conference papers, including Sembène’s presentation, were published, some in English, some in French, in the collection Protée noir, L’Harmattan, Paris, 1992.

Camp de Thiaroye represented a further development in Sembène’s approach to language. A force of African servicemen has been returned to a transit camp near Dakar, Senegal, in 1944. The servicemen are from all parts of the French West African empire. Having no African language in common, they communicate in the pidgin which the French call “petit nègre” (“little nigger”) and which my friend the great Mauritanian filmmaker Med Hondo thinks would be better called “little white”! Not only is this choice of language absolutely appropriate in terms of the dramaturgy of the film, it also ensures that the dialogue will be largely comprehensible throughout all the Francophone former colonies of West Africa, and maybe elsewhere, without dubbing or subtitling. This shared language has the potential to unite the film’s audiences precisely as it has served to unite its characters.

November 1944: a ceremonial parade on the dockyards of Dakar, to greet a force of tirailleurs (colonial troops) from all over French West Africa, disembarking prior to repatriation to their countries of origin. Some of them have been P.O.W.s of the Germans following the Fall of France in 1940. One, Pays, has been in Buchenwald, where he has lost the power of speech. Others, like the senior N.C.O., Sergeant-Major Diatta, have fought with the 1st. Free French Army against the Italians and Germans, through the Libyan desert into Tripoli, then on to Europe and the liberation of Paris, having had their period of enlistment compulsorily extended. Their sympathetic C.O., Capt. Raymond, hands them over to Major August, and then they are marched to what is little better than a P.O.W. camp. The living quarters are cramped and the food inedible, which causes the first conflict with the authorities. Diatta is visited by relatives, including his cousin, chosen as his future bride. They have fled to the city from their home village, having survived a massacre by the colonial authorities in which Diatta’s parents died. The relatives are horrified to learn he has a white wife and a daughter: “How dare you marry one of those who destroyed your village?” Diatta goes into town. As he can speak English and is wearing a uniform provided by the Americans, he is at first welcomed at a brothel in the European district: prices can be doubled for Americans! When his request for a Pernod reveals he is a “native”, he is ordered to leave. In the street he is beaten up and arrested by a U.S. military police patrol. In retaliation, Diatta’s men secure his release by kidnapping an American N.C.O. who, to the horror of the French military hierarchy, is white! A black N.C.O. from the arresting patrol visits Diatta to apologise, and express his pleasure that the Africans had roughed up a white.

The tirailleurs claim the service pay that is rightfully owing to them, and insist that their currency from metropolitan France be changed into local francs at the full, normal rate. The authorities (bankrupt financially as well as morally) refuse, suggesting that the money may have come from looting the bodies of dead comrades on the battlefield (it’s “too much for a nigger”) and that the tirailleurs‘ forceful insistence on their rights is a sign they have been bought, either by the Nazis or the Communists! The responsible General visits the camp to quell the budding mutiny, but refuses to alter the rate of exchange. He is seized by the tirailleurs, Pays in the lead, who then take over the camp. The General ultimately capitulates, and is cheered by the men as he leaves. Raymond congratulates Diatta, and the camp celebrates in music and dancing.

Only Pays has doubts; the next morning, from the watchtower, he sees motorised artillery moving into position to shell the camp. No one heeds his warnings that the fascists are coming, thinking him demented. At 3.00 a.m. on December 1, the shelling commences. By dawn, the massacre is over, and the dead being buried. The General informs Major August that the Colonial Minister and the Governor-General have approved his action. Unaware of the betrayal of his men, Capt. Raymond embarks for France with a newly recruited unit of tirailleurs. He looks around, puzzled that Diatta is not there with the coffee Raymond has promised to take to Diatta’s wife in Paris; in fact, the coffee is there, in the hands of Diatta’s cousin, a sign the relatives are reconciled to Diatta’s marriage.

In this powerful and moving film Sembène, in collaboration with Thierno Faty Sow, who co-scripted and co-directed, reclaims and tells to the world another of those fragments of history concealed by colonialism which he sees it as his task to disinter. Such stories are part of the history not only of Africa, but of the colonial powers, in this case France, as well. “You don’t know natives or the colonies”, Capt. Raymond is informed when, at a meeting at the General’s H.Q., he insists that the Army should honour its obligations to the tirailleurs. France, he argues, cannot successfully reconstruct by “robbing natives”, particularly those who have, as he outspokenly reminds the assembled officers, been fighting the war “in your place, gentlemen”, a reminder that the authorities in Senegal initially collaborated with Vichy. Ironically, it is not his ignorance of “natives or the colonies” that limits Raymond, but his naivety about his fellow Frenchmen: “An officer who does not keep his word is not worthy to wear the French uniform.” When he hears of the massacre in Diatta’s village he is quick to point out that it occurred in 1942, under Vichy. (In Sembène’s 1971 film Emitai massacres in the Diola region from which Diatta comes are shown as continuing after the liberation of France, and De Gaulle’s assumption of power.) Diatta argues that the mentality of colonial armies, be they French or Nazi, is the same, going on to point out that collaborators are surrounding the leader of the Free French and being put in charge of the colonies. Despite his greater historical awareness (Raymond is, in fact, often prepared to defer to his erudition) Diatta too is taken in when the General apparently gives in to the tirailleurs‘ demands, and offers his word “as a general officer”.

Just as Diatta has mastered the discursive and intellectual codes of the Europeans, so too the major African filmmakers have mastered the codes of European as well as African representational discourse. One aspect of this mastery is the ability to create complex European characters such as Raymond, whose dilemmas are forcefully and convincingly articulated. Nevertheless, it is in its account of African society that the true beauties and richness of African cinema are to be found. Howeve,r the systems of discourse deployed by Africans in aesthetic and dramatic construction, and in interpersonal and socio-political relations, differ from those of Europeans. Thus African films may occasionally seem slow to European critics and audiences, who are sometimes unable to perceive the details of the representation. In this film a great deal of narrative information is conveyed by purely visual means, in the staging of background action: the tirailleurs‘ initial success in getting the army to provide them with meat, for example, or the role of the tirailleur-marabout as the religious leader of the Muslims, and a generally trusted figure.

Secondly, debate is very important in African cinema. It draws on the political rituals of traditional society, which, though feudal, had its system of checks and balances, which resulted in some degree of democratic exchange of opinion. In Camp de Thiaroye the tirailleurs use the traditional, highly rhetorical, almost theatrical, mode of debate of their various societies, but adapt this ritual form to the only language they have in common: the pidgin which the French insultingly call “petit nègre”, a language which is both a result and a tool of colonial exploitation. Here it is revealed as having a potential for eloquence, allowing it to become a moving medium for the articulation of feelings, needs, grievances and resistance, and thus ultimately for the development of the tirailleurs‘ collective political awareness and consciousness of themselves as Africans. One consequence of the latter is the decision to choose their own leaders, selecting a representative from each barracks, rather than relying on their nonetheless much loved and respected Sergeant-Major, who has been promoted by the whites. The structures they evolve grow out of their historical situation, and compare strikingly with the rigid hierarchies of colonialism and the military: “The army is discipline. Obedience to your superiors”, the General tells them. The formal pageantry of the parade-ground serves to stifle debate, mask conflict, hide betrayal and destruction, whereas the theatrical exchanges of the traditional discourse offer a forum for debate, evolution and reconciliation.