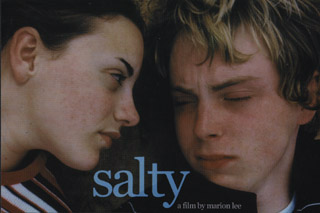 It is not that early and Andy and I are not that seedy but we are going to New York because my film has been invited to screen in a festival so we wear our sunglasses to make us feel like rock stars.

It’s so cold! We walk around, looking up a lot. Across Central Park to the Guggenheim. Travelling with an architect can give you a sore neck. In the evening we are too tired to be barflys so we go to the cinema at 2nd and 12th and see In the Mood for Love. The interior of the cinema is amazing, a domed decorated ceiling and little boxes at the side, for the President I guess. Oh, we haven’t seen any celebrities yet. I can’t keep my jet lagged eyes open, drifting in and out of screen dreams and my own. Maggie’s dress reminds me of the new Cacharel collection by Clements and Ribero. What am I going to wear to introduce my film? This is the perfect movie for this state, and I feel absorbed within this world, warm and steamy from the noodles. Afterwards I have to go to bed but I really want some noodles.

The Festival doesn’t start for another few days but we go into the office to make sure it really is happening, and not just a big hoax. Zoe, the director’s liaison, is beautiful, with red curls like Anne of Green Gables. We ask her for some places to go in Brooklyn, because we want to hang with the cool crowd and have heard that’s where they are. Zoe informs us there are press screenings that we are allowed to attend, and a guy called Ryan from a distribution company saw my film at the press screening and wants me to give him a call!

A press screening of Hole in the Sky (Kazuyoshi Kumakiri, 2001) from Japan, a film about a young girl who comes to stay in a Japanese roadhouse. The screening is at MOMA, I’m so excited, my film is going to be shown here, it seems unreal. The bagels and the kosher deli are run by Mexicans. We eat the best corn ever, rolled in chilli at a Cuban cafe.

There’s nothing like some celluloid to start off the day. A 10am press screening of Lift (2001, USA), a film by DeMane Davis and Khari Streeter, which screens with a short called Gina, an Actress, Aged 29 (Paul Harrill, 2000, USA). I really like both films. It’s so nice to see a short film that is political instead of some one-gag wonder. Lift is really dynamic, and I found it exotic, which it may well be for many Australians, because of its Boston black urban context. It is about a woman who works at a posh department store and is a professional shoplifter. We have tea at Barneys afterwards and see some scary ladies who lunch.

Lulled into the day by the Italian film I Prefer the Sound of the Sea (Mimmo Calopresti, 2000), which I missed at the Melbourne International Film Festival 2000. I wish I were a Catholic because then I could cast myself as the priest in my own films. But I’m a girl so I guess I’d have to be a nun.

I called Ryan the distributor and we’re going to meet at the opening night dinner which is on after my film screening. Andy and I listen to his voice and speculate on what he will be like. Andy says late 50s, nice suit and a bit of a belly. He sounds a bit younger to me, but I have no idea. The film industry here is such a mystery to me, amerika, the land of Hollywood dreams, but New Yorkers hate Hollywood and are trying so hard to differentiate themselves from it. I’m reading the New York issue of Projections which I feel puts me a bit in the know. I haven’t told anyone what a Hollywood teen flick junkie I am.

The day has almost come and I still haven’t decided on my outfit. First I attend the press screening of L.I.E (Michael Cuesta, 2001, USA), a really weird film about a teenage boy in Long Island. The setting is very Happiness, which I find quite freaky, but the film isn’t a comedy, it’s about Howie, a lost and confused adolescent, and Brian Cox as an old man who has a house full of little boys.

We look at some art on the walls at MOMA too. There are amazing Andreas Gursky photographs and an exhibition on workspaces that has a vending machine that sells idea pills and communicator capsules.

I’ve got the top that my mum bought for me to wear to my cousin’s wedding, and I can wear my black pants which would be good because they’re wool and it’s freezing but I need shoes. I’m exhausted by the time I find the perfect pair. Composing my introduction in the subway, I can’t believe I spent my day looking at shoes instead of practising my speech.

The cinema is full, 450 people, and I don’t actually feel too nervous. There’s a nice woman from the film society call Marian who introduces me. My line: being in New York feels a long way away from the tiny beach near Melbourne where we shot this film. I’m very excited to be here and I hope you enjoy the film.

That was it, and I spoke too quickly and then a close up of Tom and Jacqui was filling the screen and Snout’s music filled the air and the audience were watching Salty. Afterwards they clapped a lot.

Then we went to the opening night dinner and most of the food was already gone but I wasn’t that hungry anyway and we met Ryan and he is a mid-20s Asian American, totally hyper and really sweet. Drinking wine and smoking cigarettes at the bar. About 11 o’clock comes and everyone goes home. People go to bed so early here. Andy and I catch a cab home and it drives through Times Square, it’s magical.

I do my speech again and this time I stay for the feature that screened with my film, called The Cashier Wants To Go To The Seaside (Dalibor Matanic, 2000, Croatia). It is a funny film about a little supermarket with a sleazy boss and a cashier who wants to take her daughter on a holiday to the seaside. Very black, but with a happy and romantic ending. The director Dalibor skipped the other film and went to see Hannibal. He is keen on drinking some beer.

That night Ryan has invited me to see The Day I Became A Woman (Marziyeh Meshkini, 2000, Iran) and go to dinner with them afterwards. Ryan’s company is distributing the film. It is a brave and memorable film, brave not because of its subject matter of rebellious Iranian women, but because of its particular micro narrative approach to the three-act structure. The director is surrounded by a bevy of protectors but from a distance she looks beautiful. At the dinner I talk to a woman called Alana whose father is a reformed rabbi in Miami.

In the afternoon I go to PS1, a contemporary art space in Queens. Queens is cool; an egg in a roll is advertised for only 85 cents. There is a snow angel in laundry powder, somehow disturbing, and I overhear an accented voice tell its friend “you know sometimes I cry from only one eye?”

La Faute A Voltaire (Abdel Kechiche, 2000) is a French film about a Moroccan illegal immigrant in Paris. It has wonderful characters and actors and I like the story it tells, even if it goes off on tangents a bit.

Andy has gone home and I’m a bit bored of walking around in the cold on my own now. Not at the Festival but in a downtown cinema I see Yi Yi, the best thing I’ve seen so far, an amazing subtle Taiwanese family story.

At the Festival I see The Foul King (Kim Jee-woon, 2000) from South Korea, about a guy who takes up wrestling, which screens with a great short from Israel called Cock Fight (Sigalit Liphshitz, 1999).

There is a Kodak sponsored dinner at a fancy restaurant called Michael’s and I sit next to DeMane Davis the director of Lift, who is really nice. We talk about working with young actors and then she asks everyone at the table what the biggest thing they’ve ever shop lifted is. I’m embarrassed because I got caught stealing some “hello kitty” sticky tape when I was ten and was so traumatised I never shoplifted anything again. Jytte from MOMA said she always stole tampons as a political act. I can’t remember what Blair from Kodak stole but she told me about living in Westchester and commuting two hours each way to work every day.

Almost hometime now. I have a coffee with Ryan and he’s going to help me sell my film to the Sundance Channel and is very enthusiastic about what I’m working on next. I tell him about my feature and he is keen, but a bit worried that teen films shouldn’t have sad endings. I think he could be right.

At night there is a big party sponsored by Interview Magazine at a club in Tribeca. Unfortunately it is also sponsored by Bacardi Limone which tastes disgusting and is really sticky when the mobs of people make it hard to hold onto your glass. Mel says she thinks Claire Forlani is over there and I still haven’t seen any celebrities but I don’t know who Claire Forlani is and I can’t see her.

I’m going home today. I was going to have a coffee with Zoe in Brooklyn but it is too far away so I walk down and check out the Dia center. There is a fantastic tile installation.

At JFK, I check out the TWA terminal, and am transported back to another era of air travel. I read Norwegian Wood on the plane home and land in Melbourne with miso soup cravings.