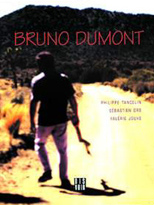 In spite of the fact that Bruno Dumont’s filmography comprises only two features to date, the acclaimed La vie de Jésus (1997) and the controversial L’Humanité (1999), they are both films of such individuality and awkward, magisterial power that a book length study is certainly not premature. Bruno Dumont contains an epigrammatic series of thoughts the director recorded while scouting locations for what was to have been his next film, The end (Cahiers du Cinéma announced that he was shooting another project this month, The end having been postponed), an essay by critic Sébastien Ors and two lengthy, in-depth interviews with Dumont. By far the longer of the interviews, by Philippe Tancelin, covers his methods and philosophical position. The other interview, by photographer Valérie Jouve, focuses more on the subject of images. Ors’ essay provides an analysis of the films. It is particularly incisive in its discussion of the relationship between characters and landscape and proposes an interesting view of Dumont’s style as a sort of slow motion ‘burlesque’ of classicism. The book is also very handsomely designed, illustrated throughout with photographs of empty rooms and landscapes Dumont snapped as part of his location scouting trip, shots often delicately balanced between the mysterious and the banal.

Bruno Dumont is very much the director’s work in his own words and what comes through is a decidedly individualistic voice, a director preoccupied with the physicality of cinema, the immediacy and mystery of bodies and landscapes in front of the camera. Although both of his films would appear on paper to be naturalistic in the extreme, with their non-professional casts and drab, provincial working class settings (in both cases Dumont’s native Bailleul) promising a cinema of social realism, their concerns are metaphysical and the detached, minimalistic style he adopts underlines this. In fact, Dumont explicitly rejects ‘reality’ in filmmaking, claiming that images of even the most harrowing realities have been rendered banal through television news overexposure. The only way to confront evil, which is what Dumont claims his films set out to do, is through fiction, to avoid ‘reality’ in pursuit of ‘truth’. He has rejected the political or sociological readings of his films that have been offered, claiming instead that he is in pursuit of ‘poetry’. Although not a religious filmmaker, he aspires to the Pasolinian concept of capturing the ‘sacredness’ in the profane.

In spite of this, his ‘poetry’ has its narrative roots in reality; his meditations on guilt, redemption and impotence in the face of evil take the form of two gritty stories with murder at their centre. In La vie de Jésus, a young epileptic delinquent kills an Arab immigrant who is sleeping with his girlfriend; in L’Humanité, a cop tries to track down the perpetrator of a child rape/murder. But for Dumont, plot is insignificant except as a device to allow characters to interact, both with each other and with the landscapes they inhabit. Like Tarkovsky, Dumont believes “the only truth is the duration of the shot, in other words the rhythm of the film itself”. His brooding long takes emphasise the character’s relationship with their environment. As Ors points out, this relationship is often important in defining the characters as, for Dumont, landscape in cinema is always representational, revealing what the director calls “interior states that remain invisible”.

The films’ uniqueness rests in superficially naturalistic settings and subject matter being used in a purely representational fashion. Dumont articulated this challenging dynamic as the body being the beginning of the soul, the primal matter and the substance of filmmaking. Thus, in his apparently very instinctive approach to filmmaking, he claims to be a “partisan of the readymade”, capturing the physical world on screen as he finds it. In performance also, he allows his nonprofessional actors to become the “incarnation” of the character, any preconceived notion of that character disappearing in the light of the actor’s specific characteristics. What make his films so troubling and ultimately allows him to transcend naturalism is the subtle stylisation of numerous small details of characterisation and presentation. For example, citizens of Bailleul were puzzled at the emptiness of their normally bustling streets in La vie de Jésus. These elements create a constant sense of unease by presenting us with a picture that is apparently everyday, but is also strange and alien, causing us, consciously or otherwise, to look at ordinary things with new eyes. While in La vie de Jésus these subversions are mainly manifest as details, in L’Humanité, Dumont courageously builds his whole film around a subversion, the lead character played by Emmanuel Schotte, a simpleminded, hypersensitive policeman. Slow moving and thinking, he is both saintly in his all-consuming sympathy for his fellow man and sometimes irritatingly abject in his relationships with those around him. He might be a candidate for the position of cinema’s most unlikely cop, but his job brings him into constant contact with the ‘evil’ that seems to preoccupy the director and his very particular sensibility provides Dumont with the perfect filter for his philosophical concerns.

Perhaps the most intriguing aspect to emerge from the Tancelin interview is Dumont’s discussion of future projects. He speaks in terms of American stars, science fiction storylines and a more mainstream audience accessible film, yet claims he will remain essentially true to his vision. For this most imposingly severe director to have emerged from Western Europe over the past 10 years, such statements appear startling. But whatever changes he brings about in his style, the essential thing is that he retains what ultimately makes him such a rare and badly needed presence on the stage of contemporary world cinema: his belief in the importance of time in filmmaking. His courageous ability to tell his stories by allowing his audiences to feel the full, slow weight of time as it passes.