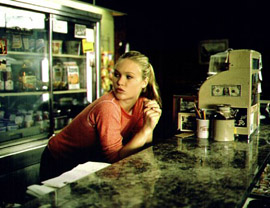 “Life in the movie business is like the, is like the beginning of a new love affair; it’s full of surprises, and you’re constantly getting fucked.” (1)

The alchemy of business has long been recognised as one of the most intriguing features in David Mamet’s theatrical and film texts. It has in fact proved an inexhaustible source of inspiration for the playwright and the filmmaker, who obsessively examines the “ethical perversity” (2) of contemporary America in his plays and films. Since his early dramas, American Buffalo (1975) and Glengarry Glen Ross (1984), Mamet has deflated any consideration of business as an honest and noble pursuit, tracing the hazardous business ventures and restless endeavours of his characters “to get something for nothing” (3). The playwright frequently points out that American entrepreneurial culture is based on lies, corruption, exploitation and deceit, and suggests that, drawing inspiration and psychic sustenance from the logic and codes of business, his characters twist their lives into bizarre and grotesque forms. Their modus vivendi epitomises the intensive, all-out quest for money and their dubious ethical standards seem perpetually overshadowed by the urgency of a quick financial gain.

Mamet’s obsession with the ethics and codes of entrepreneurship can only be matched by his persistent investigation of the most fascinating phenomenon of the American business arena – the Hollywood film industry. In the last text of his Business Trilogy, Speed-the-Plow (1988), in which the playwright pokes fun at Tinseltown’s avarice and hypocrisy, and his subsequent play, Bobby Gould in Hell (1989), Mamet portrays Hollywood as the venal industry which conquered all frontiers, and is driven by a boundless energy and formidable determination to manipulate and exploit.

Since his cinematic debut, House of Games (1987), Mamet has persistently examined the postmodern amorality of his characters, their verbal dexterity and obsessive interest in the subversive and manipulative power of words. Mapping what Michael Billington terms “the infinite network of human betrayal,” (4) the director simultaneously examines the subverted identities of his heroes. Mamet sees con-artistry in psychoanalysis and academic counselling (House of Games and Oleanna [1992]), the operative clichés of street smart criminals and lackeys of corporate capitalism (Things Change [1988] and The Spanish Prisoner [1998]) and the fascinating tales of his hostage negotiators (Homicide [1991]). He celebrates con-artists because they run a theatrical/cinematic gamut; their speech is stylised, poetic, their subtext carefully concealed, their metaphors complex and often confusing and their gestures detailed and carefully planned. The director continually reminds the audience that the performing brio of his characters remains the most intriguing, enigmatic aspect of their personalities.

It is not surprising that in his seventh film as writer/director, the comedy State and Main (2000), Mamet returns to familiar territory. He follows the Hollywood film crew that arrives in Waterford, a small town in Vermont, in pursuit of a location for the filming of The Old Mill, a nineteenth century melodrama about passion and the quest for purity. The crew is led by the manic, sweet talking director, Walt Price (William H. Macy), and his business partner, producer Marty Rossen (David Paymer), to whom the sleepy town looks like a perfect, pastoral setting for their tale. Price and Rossen gather the cast and crew and liaise with the local mayor (Charles Durning), confronting problems as they arise. And the problems abound: Wateford’s historic mill was destroyed in the fire, during the 1960s; actress Clare Wellesley (Sarah Jessica Parker) refuses to bare her breasts, asking for more money; and, to make things worse, the main star of the film, Bob Berenger (Alec Baldwin), continues to get involved with underage girls, a habit which recently almost got him into jail.

Ironically, the only person who can get them out of trouble is Joseph Turner White (Philip Seymour Hoffman), a talented playwright from the East Coast who wrote the screenplay for The Old Mill. White seems confused throughout his first experience in the world of film and by the multitude of contradictions and creative and ethical compromises he faces from the first day. He re-writes the opening scene, changes the title and the main idea of the script, and finally, cuts out the nude scene for Wellesley. White accepts these compromises as a price to be paid for a career in the film industry, and takes them lightly because of his love affair with the local community theatre director, Ann Black (Rebecca Pidgeon). However, a scandal on the location jeopardises the project and finally challenges the writer to think about his ethical dilemmas.

Inspired by the classics of Preston Sturges, Mamet uses the narrative framework of the 1940s ‘gang comedy’ to tell the story about a troubled Hollywood crew filming in a country town in Vermont. The director’s exploration of this form began with his Pulitzer prize winning Glengarry Glen Ross (1984, made into a film and directed by James Foley in 1992), a play about a group of scheming real-estate agents who sell worthless pieces of land in Arizona and Florida to their gullible clients. Similar to Glengarry Glen Ross, Mamet uses fragmentary narrative to create a mosaic of situations in which his protagonists confront each other under pressure, using the fast paced, idiomatically exclusive jargon of movie making. Their intense, explosive dialogue incorporates a variety of poetic elements, lyrical digressions, offensive remarks, Yiddish expressions and brief, cinematic flashes of memory – producing a stream of continuous comic effects.

The director criticises the corrupt movie making industry, but also reveals the shallowness of the ostensible simplicity of rural America. The locals living on Main Street, USA are not much different from the Hollywood moguls, Price and Rossen, who discuss product placements and chains of ownership in their new movie. The citizens of Waterford search for business opportunities, read Variety, prepare to audition for small parts in the film, and, in some cases, like the local teenager Carla (Julia Styles), use their charms to catch the big Hollywood fish into their web of intrigue. Mamet suggests that they are not immune to the moral and spiritual malaise of contemporary America, a society and culture obsessed more than ever by lies, litigations and money making ventures, but still immersed in the old illusions of grandeur.

Mamet’s cast combines Hollywood stars of different generations with his vintage ensemble. Charles Durning and Patty LuPone perform alongside Alec Baldwin (also a producer), Sarah Jessica Parker, Philip Seymour Hoffman and Julia Styles. On the other hand, Mamet’s long time collaborators, William H. Macy, Ricky Jay, Clark Gregg, Rebecca Pidgeon and Jonathan Katz (from the TV series Dr. Katz), again play prominent roles in the film. Baldwin and Parker are convincing, and to some extent self-ironical, in their roles of infantile movie stars, contrasted by Hoffman’s timid and confused scriptwriter. Gregg’s greedy and ambitious politician and Styles’s teenage seductress also add to the ironical subtext of the script, while Rebecca Pidgeon’s Anne continues the long line of talented and capable, but stylised, distant and almost emotionless female characters in Mamet’s films. Yet, the motor of the ensemble are the performances of Macy and Paymer who are convincing and compatible in their roles of ruthless Hollywood filmmakers. The cadences in their speech, the manic, break-neck dialogues and the meticulous, Pinteresque use of pauses, continually remind the audience that Mamet is first and foremost a ‘language playwright’ (5).

Alongside Mamet’s old collaborators, producer Sarah Green and editor Barbara Tulliver, the director has also recruited new members. The DOP, Oliver Stapleton has captured the pace, the colours and the scenic atmosphere of a sleepy little town in New England with a touch of irony, accentuating the picturesque qualities (the firehouse, the mayor’s residence, shops and period homes), which attracted the creators of The Old Mill. In the same vein, the composer, Theodor Shapiro, has captured the rhythms of rural America, contrasting them to the relentless pace of show business intruders.

Mamet’s State and Main is an entertaining experience. The writer/director returns to his favourite subject, Hollywood, vigorously exploring the moral quandaries and ethical degradation of contemporary American society. Mamet continues to reiterate that, struggling to escape the distorted rules of competition and consumerism and the oppressive logic of business, his confused characters still feel the impelling need for an adequate reformulation of the contemporary frame of existence.