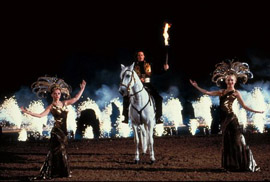 When Sally Potter first appeared on the independent British filmmaking scene in the late 1970s, she attracted considerable critical attention. The influential circle of feminist film critics who arguably dominated British film theory during this period, rushed to embrace Potter’s debut film, Thriller (1979). The film’s deconstructive impetus and avowed feminist agenda ensured its status as an instant classic of independent feminist filmmaking. Potter, along with Chantal Akerman and Yvonne Rainer, was anointed part of an international vanguard of feminist filmmakers – practitioners who could formalise on screen the sorts of radical changes to film language and content that many feminist film theorists were calling for. These filmmakers privileged a ‘feminine voice’ and offered the radical possibility “… of a ‘feminine language’ for cinema”. (1)

Some twenty years on, this feminist appraisal of Potter’s early work remains in many respects, remarkably apposite. Her subsequent films, including The Gold Diggers (1983), Orlando (1993) and The Tango Lesson (1997) are testament to the director’s ongoing commitment to privileging a ‘feminine voice’ and a distinctively female perspective on screen. The notion of the ‘female quest’, identified as a governing impulse in her first three films, could similarly apply to her more recent works. (2) Equally, the bravura experimentation of Thriller has been succeeded by a series of films with an unequivocally if unevenly innovative agenda. Potter’s most recent work, The Man Who Cried (2001), evidences all her preoccupations but on a larger and arguably less successful scale.

The film is an odd blend of Potter’s distinctive visual style imposed on a classic Jewish tale of pre-WW2 forced migration and victimisation. Here the typical Potter ‘female quest’ is embodied in peripatetic young Russian Jewish heroine Fegele Abramovitch (Claudia Lander-Duke). Effectively orphaned by her grandmother’s death and her father’s departure to seek the family fortune in America, Fegele flees (inadvertently) to England. Her name and identity are thoroughly anglicised by her adoptive Christian parents. Fegele now Susie (Christina Ricci) is unable to adjust to her stifling adoptive home and courtesy of her unusual singing talents, finds an escape route to Paris with a travelling cabaret troupe. Here, Susie’s continental drift is temporarily halted as she establishes herself in the chorus of a Parisian opera company and is befriended by fellow Russian, the socially ambitious Lola (Cate Blanchett). Both women form liaisons with men in the opera company and these developing relationships are played out against the increasingly fraught backdrop of the German invasion and occupation of Paris.

From its irritatingly opaque title to conversely, its overly simplistic resolution, this is an uneven and ultimately disappointing film from Potter. While favourably reviewed in the Jewish press as “one of the year’s most significant, touching and delicately presented Jewish films”, the specific historical and cultural framework of Potter’s film seems-strangely-almost incidental. (3) Susie’s Jewish heritage works more particularly as a dramatic pretext that allows Potter to move her heroine around the globe, positioning her against a series of contrasting locations: the barren landscape of 1920s rural Russia; the closeted confines of urban middle class English life; the colour and movement of late 1930s Paris; and the ultimate in reflexive cinematic destinations – Hollywood. In The Man Who Cried, as with Orlando and The Tango Lesson, all the world is quite literally a stage.

Locations in Potter’s films generally, and in The Man Who Cried in particular, work less as a conventional backdrop to the exigencies of character and situation and more as a function of a contrived, deliberately theatricalised understanding of space. The restless pilgrimage of Potter’s camera in her three most recent films reveals a fascination with the distance rather than proximity these settings confer. Familiar locations take on a defamiliarised quality. Iconic cities and topographies are drained of their signifying quality and instead become a de facto proscenium arch for Potter’s troupe of travelling players. In The Man Who Cried, Parisian streets are strangely deserted, allowing characters to strut their stuff in an often deliberately self-conscious way. Gypsy serenades outside a lavish, Versailles-style mansion; horseback riders three abreast in the Place de la Concorde – every location becomes a performative space in the oneiric milieu of Potter’s world. With the The Man Who Cried, Potter extends the “elaborately staged and exuberant cultivation of artifice” that characterised Orlando. (4) But Potter’s new film has none of the lightness of touch that made Orlando such a whimsical and original take on the English costume drama.

Characterisation is perhaps the director’s downfall here. In contrast to the wry appeal of Orlando’s direct address or the overtly personalised narrative of The Tango Lesson, the central characters in The Man Who Cried have an oddly hollowed out, detached presence. Ostensibly a classic, inquiring Potter character, Susie is, despite her tragic story, the least proactive and most underwhelming heroine the director has written for the screen. Silent for virtually the first third of the film, Susie remains a frustratingly blank canvas, shaped by but rarely shaping other characters or events. Depp as gypsy horse wrangler Cesar (an uninspired reprise of his character in Chocolat [Lasse Hallström, 2000]) and John Turturro as temperamental tenor Dante, suffer equally from a lack of delineation. They suggest two extreme representations of masculinity, the former, the seductively enigmatic stranger, the latter all sound and masculine fury.

But this treatment of male characters is arguably an interestingly politicised strategy in Potter’s work. Given the centrality of female characters in her films, men are frequently relegated to supporting and minor roles. They are even, as has been noted in Potter’s early musical The Gold Diggers, generalised to the point of anonymity. (5) Potter’s feminist sensibility is clearly reflected here in her ironic treatment and often wilful objectification of male characters. While this works to amusing effect in films such as Orlando, in The Man Who Cried, in combination with an impenetrable heroine, it makes for frustratingly flat character dynamics. Only Blanchett, making the most of her scene-stealing turn as a Russian vamp, intermittently invigorates proceedings.

If The Man Who Cried disappoints in many respects, it is considerably redeemed by Potter’s trademark musical eclecticism. A composer as well as performance artist and choreographer, in this film, perhaps more than any other, the music is the thing. The numerous contrivances of plot and character are thus ultimately at the service of the score. Generous amounts of screen time are given over to musical interludes, allowing songs, including Yiddish, gypsy, 1940s cabaret and large chunks from the classical opera repertoire, to be played out in their entirety. Where dialogue is often minimal and characters monosyllabic, music takes over the expository and emotional function in the film. The Man Who Cried is perhaps the strongest expression of the defining influence that music has exerted in Potter’s filmmaking career. One just wishes that her inspired musical choices had been accompanied by a more provocative and engaging dramatic premise.