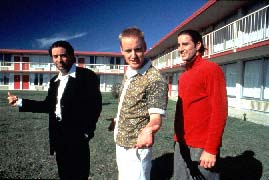 They might be short on budget, star power, special effects and kudos, but these films still deliver.

The first feature from Wes (Rushmore [1998]) Anderson, Bottle Rocket is the very funny tale of two likeable losers, Dignan and Anthony (real life brothers Owen and Luke Wilson), who think that in order to experience adventure and excitement, they must become embroiled in a life of crime and danger. The film’s strength is its gentle humour and Anderson’s genuine affection for its characters. No less an authority than Martin Scorsese is a fan of Anderson’s work: “Wes Anderson … has a very special kind of talent”, said Scorsese. “He knows how to convey the simple joys and interactions between people so well and with such richness. This kind of sensibility is rare in movies.”

Taking a break from the bit parts and walk ons that have constituted the bulk of his career, Steve Buscemi is front and centre in Trees Lounge, a slice of life drama set in New Jersey that the fast talking actor wrote and directed. Buscemi is Tommy, a barfly and screwup who spends his considerable spare time drinking at the Trees or when things really hit rock bottom, driving his uncle’s ice-cream truck. Funny in a bittersweet way, it’s an original and rewarding addition to the Buscemi canon.

The last and best of the John Cusack teen films, with The Sure Thing (Rob Reiner, 1985) and Better Off Dead (Savage Steve Holland, 1985) also worth a look by fans of the genre. In this superbly penned Cameron Crowe film, Cusack plays Lloyd Dobler, a likeable kickboxer who falls for the class brain and beauty. Say Anything. is an endearing film full of keenly observed characters and some winning dialogue.

Before Mike Figgis went all experimental with Timecode (2000) and The Loss of Sexual Innocence (1999), his raison d’être was making striking, sumptuous films populated by beautiful thespians. Liebestraum is certainly of that ilk. Kind of a neo-noir working across two timezones, it’s the story of a brace of affairs, a stately building and the connection between them.

From Knute-Rockne All-American through Rocky and on to The Replacements, the classic sports film formula has been one of teams or individuals using the arena as a place of redemption. The Boxer, though, is a searing drama set amid ‘the Troubles’ of Northern Ireland that both re-defines and avoids the clichés of the genre. Danny Flynn (Daniel Day Lewis) is a talented boxer who has spent the better part of his adult life in jail. Upon release his attempts to build a new life in the ring and outside it are thwarted by the same forces he protected by serving hard time. Delivering his lines as convincingly as his uppercuts, Day Lewis’ performance as a pugilist is the best since Robert De Niro’s as Jake La Motta in Raging Bull (1980).

Occasionally turning up at odd hours on television, The Final Combat was made by Luc Besson before he went on to make the familiar The Big Blue (1988), Nikita (1990) and The Professional (1994). Reminiscent of Mad Max 2 (George Miller, 1981) (there’s even a gyrocopter) the film is set in a post-apocalyptic wasteland where some unknown catastrophe has caused the destruction of society as we know it, fish to fall from the sky and all the characters to lose their voices. While there’s music and incidental noise, there’s no dialogue. Shot in black and white and featuring the work of Besson regulars, including the charismatic Jean Reno as a villain (The Brute), The Final Combat is an intriguing late night delight.

Not a whole lot happens in Mediterraneo, a calmly paced, lyrical film directed by Gabriele Salvatores that won the Academy Award for Best Foreign Film. It’s the story of an Italian army unit that’s sent to guard a picturesque Greek island during World War 2. But cut off from their superiors and with their radio destroyed, the bumbling unit settle gradually into daily life, spending their time with the pulchritudinous prostitute Vasilissa (Vanna Barba), playing soccer, or in the case of the lieutenant, painting the local chapel. It’s an easy film to watch. Predicated on character and atmosphere, the beautiful setting plays as big as role as any of actors.

A moody heist film with a sapphic flavour from the Wachhowski brothers, the team that also delivered The Matrix (1999), Bound is an engaging neo-noir that’s as stylish as it is unpredictable. Vioilet (Jennifer Tilly) is your classic femme fatale just waiting for a chance to betray the coarse Caesar (Joe Pantoliano). Corky (Gina Gershon) is the insouciant ex-con who gets dragged into a complex web.

Set in ’50s suburban New Jersey, Big Night is the story of two brothers, Primo (Tony Shaloub) and Secondo (Stanley Tucci, who directed with Campbell Scott) and their attempts to run a restaurant that is culinary-wise ahead of its time. As might be expected, the food is an integral and evocative component of the movie, which is also served well by a jumping soundtrack, some sterling acting, a witty script and an unconventionally moderate pace. The final scene is a truly inspired piece of filmmaking.

A prison yarn for the most part, Down by Law is the quirky (what would you expect from Jim Jarmusch?) tale of three jailbirds. Jack (Tom Waits) is a hip but low-rent DJ, Zack (John Lurie) a smooth pimp and Roberto (Roberto Benigni), a poetry-reading Italian immigrant convicted of murder, find themselves trapped in the same cell in a Louisiana Bayou prison. Neither prison time nor the film move particularly quickly but gradually layers are added and the whole mood of the picture alters. Worth a viewing for the “I scream, you scream, we all scream for ice cream” scene.