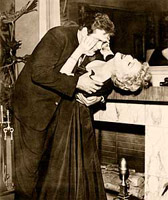 Fritz Lang’s stint in Hollywood had lasted nearly twenty years by the time he directed Blue Gardenia. (He came to America in 1934 with a contract from David O. Selznick and MGM; this contract resulted in only one film, Fury [1936].) The production circumstances surrounding this film, his seventeenth Hollywood feature, were all too typical of his experiences within the American film industry in general: minuscule budget (and minimal salary), very little involvement in pre-production decisions, for example, script development, choice of actors, and working under a highly abbreviated production schedule. Blue Gardenia, in fact, was even more bargain basement than Lang was used to, an emblem of Lang’s decreasing prestige. Alex Gottlieb, the independent producer of Blue Gardenia, is best known for having produced the first ten Abbott and Costello films for Universal at budgets and production schedules on a par with Blue Gardenia. (Later, Gottlieb would become the producer of such television shows as ‘The Donna Reed Show,’ and ‘The Tab Hunter Show.’) Lang shot Blue Gardenia in twenty days between 28 November and 24 December 1952. (One of the reasons he was able to keep to this schedule is because of his deployment of a new crab dolly which allowed the camera to be moved around the set on rubber wheels rather than by the laborious process of having tracks laid out on the set. This crab dolly results in several long takes, including one shot at the Chronicle newspaper which lasts a minute-and-a-half.)

Yet despite the niggardly working conditions and the obvious limitations of the material, Lang manages to make Blue Gardenia his own, and he does so not by transcending the banality of the material but by giving this banality a thematic (dare I say, philosophical) significance. The Los Angeles of Blue Gardenia is presented as a series of dreary interlocking social and economic spaces subject to the logic of capitalist consumption, most memorably condensed in Crystal’s (Ann Sothern) preview of her hot date with her ex-husband: “drive-in dinner, drive-in movie, and afterwards we go for a drive.” Every character, every act (including murder) is caught within these mirror duplications, this infinite regress of commodity forms. Casey Mayo (Richard Conte), the star reporter at the Chronicle and the film’s ostensible hero, is introduced simultaneously in the flesh, as he rushes to a meeting at the West Coast Telephone Co., and as image: as Mayo stands in the background waiting to catch the elevator we see his photograph which accompanies his newspaper column in the foreground. Later, Norah Larkin (Anne Baxter), the film’s heroine, will also be seen – through dissolves – as both an image and as flesh-and-blood character.

Mayo’s behavior, moreover, links him not only to the eventual murder victim Harry Prebble (Raymond Burr) – Mayo and Prebble are two bachelors on the prowl – but to the boyfriend who dumps Norah via a ‘Dear John’ letter. These correspondences between characters are established not only through details of mise en scène (Casey has a little black book, Prebble claims that he has collected “more phone numbers than the telephone company”; they each have installed in their bachelor pads a private bar) but through framing, camera movement and – in the case of Mayo with Norah’s ex-fiancé – the use of voiceover. Compare, for instance, the way that Lang shoots the scene of Norah being dumped on her birthday with the scene of Norah reading Mayo’s ‘Letter to an Unknown Murderess.’ Lang establishes these two scenes and these two males as parallel. By doing so we are cued to see things that the characters remain blind to: not only Casey’s sliminess (he tells Al, his photographer sidekick, “I want to be the guy to nail her [the murderess]”) but also Norah’s persistent willingness to be misled, to be duped.

Norah’s interchangeability with the other female characters is evident from the beginning. In fact, it is Crystal, one of Norah’s two roommates, who first catches the eye of both Mayo and Prebble (and Lang’s roving camera). And it is Crystal again whom Prebble thinks he is speaking to on the telephone and asking out for dinner and drinks. Norah fills-in for Crystal and why not? They are both blondes with similar body types and hair color (as are the other primary female characters: Sally and Rose). Is this not the significance of the dissolve from Prebble’s sketch of a generically attractive young woman posed in a black evening gown to Norah standing in the exact same pose and wearing a black Taffeta gown? Here a representation of feminine allure actively becomes Norah, or is it the other way round? Norah puts on this gown because it is a special occasion (it is her birthday and she has a letter from her soon-to-be-ex-boyfriend waiting to be read) but this dissolve serves – like the other doublings – to undermine the character’s individuality. Sally looks at Norah in her new gown and says ‘I’m glad you bought black. It will look good on any of us.’

And this sense of de-individuation will only increase as the film proceeds. When Mayo interviews the blind flower seller who sold a blue gardenia to Prebble’s murderess the night that he was killed, her daughter surmises that the murderess’s dress, already identified by her mother as taffeta, must be black since “that’s the fashion this season.” The logic of her reasoning is never called into question, and in fact it doesn’t need to be since it is the color of Norah’s dress (and, hence, we are led to assume here that it was exactly its status as the latest fashion that led Norah to buy it in the first place). Later, when one of the young cub reporters at the Chronicle asks Mayo how he knows that the murderess is beautiful – since this is how he has described her in his column – Mayo says “they’re always beautiful.” And it is true, she is beautiful. Norah’s role throughout is thus simply to fill-in-the-blanks of the plot with herself. (The only moment when Norah demonstrates any true awareness of her plight comes when Mayo asks her if she is a LA girl and she says “No, I live here but it’s not my home.”)

What The Blue Gardenia seems to signal finally is the demise of film noir – a genre which Lang helped establish (M [1931]) and refine (Women in the Window [1944], Scarlet Street [1945]) – and its possibilities of nocturnal passion and existential striving. Noir, in this sense, can be seen as one of the final attempts – alongside another form of artistic expression of the period, abstract expressionism – to forestall the processes of reification at work in popular culture. The low-key chiaroscuro lighting of noir is moodily evoked several times in The Blue Gardenia (and, in fact, the cinematographer Nicholas Musuraca also shot Jacques Tourneur’s noir classic Out of the Past [1947] as well as Tourneur’s Cat People [1942] and I Walked with A Zombie [1943]) but it is supplanted through the course of the film by the harsh glare of television with its preference for flat, overhead lighting. This evisceration of the shadow world of noir finds its musical counterpart in Lang’s juxtaposition of Wagner’s ‘Liebestod’ with Nat King Cole’s ‘Blue Gardenia’ (!). The former becomes the clue which allows Mayo to improbably solve the crime. Sitting in an airport lounge with Al waiting to fly off on their next assignment – “Front row seats at the next H bomb blast” – he suddenly becomes aware of Wagner being piped in on the airport speakers. He asks Al “What’s that?” Al responds “Music. They can everything these days.” Wagner’s death-haunted (yet, canned) music will play through the next couple of scenes until the real murderess is unmasked. Then, in the final scene, a chord from Wagner will sound only to resolve itself … in bouncy movie music which accompanies the ‘happy ending.’ The musical resolution, we might say, is a different kind of death knell, another form of death than the one promised by Wagner and noir. What we have in The Blue Gardenia is a death-in-life in which we can no longer tell whether the life we live is our own or just an episode from a television series. In this context the closing shot of a LA freeway concrete overpass – a repetition of the film’s opening image – takes on an unexpected relevance and poignancy.