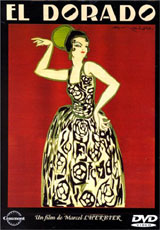 Two DVDs issued by Gaumont Columbia Tri-Star in France may prove to be landmarks in the development of new releases of classic material on DVD. Marcel L’Herbier’s El Dorado (1921), the first of his films I have seen, and Louis Feuillade’s Fantômas (1913/14) have both been issued in elaborately boxed packaging, limited to 12,000 numbered copies. The DVDs are for “Tous Publics” and neither has regional coding. The distributor has drawn upon restored material for both films so let me record in a little detail what has occurred.

In 1995 Gaumont and the Film Archive of Centre Nationale Cinematographique (CNC) embarked on a restoration process for El Dorado which involved using available shortened copies of the film, which included those lacking inter-titles. No tinted prints were in existence, apparently because the cinémathèques holding copies could only afford to make straight black and white prints. The film was restored to its full length, the inter-titles re-inserted and the delicate tinting redone. Needless to say the result is magnificent. Crisp, beautifully coloured, the film has great clarity in its images. The music is recorded with equal clarity.

These details are supplied in the quite elaborate booklet that comes with the DVD. The booklet includes: a new appreciation of El Dorado by Mireille Bealieu, and other essays by Bealieu on the French Cinema of the ’20s and Marius-François Gaillard’s music written to accompany the film and recorded on the DVD. The score is of some importance. Noël Burch notes in his entry on L’Herbier in Richard Roud’s Cinema: A Critical Dictionary that “the film for the first time in the history of the cinema – and such incontestable ‘firsts’ are rare – was accompanied by a musical score composed with reference to the images and intended to be performed in constant synchronism with them.” (1)

Also in the booklet are: notes by the contemporary composer, critics of the day, L’Herbier himself, Louis Delluc and Burch (written for Cahiers du Cinéma in 1968); notes on the actors; a biography of L’Herbier; a detailed filmography and the technical credits including those for the restoration which acknowledge as well the participation of the Cinémathèque Française, the Museum of Modern Art in New York and the Swiss Cinémathèque. Separately contained in the package is a facsimile reproduction of one of L’Herbier’s production notebooks which is included to give some insight into L’Herbier’s working methods.

The disk itself contains a number of additional features that also are designed to give insight into L’Herbier’s methods. The most striking of these is an interactive method of comparing the final cut of the film with what I take to be the shooting script. This involves examining the notebook referred to before and then bringing up the related sequence. For me at least, however, L’Herbier’s precise but spidery handwriting was too difficult to read and absorb. Nevertheless it’s the first time I have seen this method of analysing sequences used on a DVD.

On a first viewing of El Dorado it seemed stilted and somewhat moralistic. On a second, after assistance from some of the accompanying material, the extent of L’Herbier’s mise en scène started to reveal itself. I became more aware not just of the use of super-impositions, distortions and out of focus shots, but the meaning that L’Herbier was trying to impart through this to develop the psychology of the characters. The acting seemed less artificial than first and the employment of the Spanish landscape as a brutal background element became more apparent. The characters, overdressed and heavily groomed, were strangers to this terrain; they appear almost as mannequins acting out emotional crises in a bleak and unresponsive landscape. I have no great knowledge of silent melodrama, and very irregular contact with it and its acting conventions, and there is always a process of adjustment I find when viewing it. On a second viewing one can more readily appreciate the nuances of the narrative and the methods of defining character.

L’Herbier’s work remains largely unknown today. In Australia there has been very little attention given to him though the Cinémathèque has screened a number of his films held from time to time in the French Embassy collection. The only essay I could find on him was the one written by Noël Burch. In his endnote, editor Richard Roud mentions the paucity of material in English on the director. (2) In fact in this jurisdiction almost all French silent cinema is a closed book.

Burch mentions that L’Herbier “made one or two very fine and very important films after the coming of sound only to lapse subsequently into distressing conformity”. (3) One film is available on DVD to enable a judgement to be made about that “distressing conformity”, the romantic comedy La Nuit Fantastique (The Fantastic Night, 1942) issued by Image Entertainment in the United States (No Regional Coding, #ID9082SIDVD). According to the packaging, the film won the Grand Prix du Cinema Français in 1942. It was a period when French cinema was strictly circumscribed by the German occupiers and consisted largely of boulevard comedies. Yet the film, adapted by Louis Chavance, Maurice Henry and L’Herbier from an original story by Chavance is very pleasant entertainment. In it L’Herbier does resort to some of his magical visuals, even if only to simulate drunkenness and it has a narrative with a certain surreal mystery attached to it. It’s a droll and quite involving story.

La Nuit Fantastique‘s narrative is very contrived. Denis is a student by day and a market vegetable box stacker by night. This tires him out leaving his girlfriend sufficiently frustrated to begin an affair with a local creep and petty thief. He falls asleep at work and on the first night sees a heavenly vision. On the second night he falls asleep again but this time follows the angel into a narrative that’s part romance and part Denis in Wonderland. Micheline Presle, utterly gorgeous in shimmering white and silver lame, plays the angel. You need not be concerned about the plot that involves ever more mysterious moments and derring do escapes but without a breath of suspense. The DVD is taken from an excellent print and has new crisp yellow English subtitles. There are no features beyond arbitrary division of the film into twelve chapters.

Louis Feuillade did not live long enough to enter the sound era. He was dead at the age of fifty-two in 1925 after having completed his final film Le Stigmate, a serial in six episodes, the previous year. He commenced making films early in the century and of the various filmographies devoted to him, none make any claim to completeness. One claim is that he wrote at least 800 scripts of which he directed 700. Most were short one or two reelers. It is also claimed that the Gaumont company in France has preserved about 500 of these films. Among those preserved are the major serials Fantômas (1913/14) and Les Vampires (1915/16). Both have been seen regularly and revived throughout the world. The DVD restoration of Fantômas does provide a beautifully preserved print with additional work on the inter-titles and the additional pleasure of a new score by Jacques Champreux who also supervised the restoration.

The complete series of Fantômas consists of five separate serials. The DVD issued in France, in 1999, has only French inter-titles. Les Vampires is available in the United States on both DVD and video. I have only seen the video version so I am unable to comment on what the DVD might include as extras.

As far as I know there has never been a Feuillade film screened in Australia but again I stand to be happily corrected. On the evidence of Fantômas alone, clearly the claim made by David Thomson for Feuillade as “the first director for whom no historical allowances need to be made” (4) is fully justified. Thomson also claims Fantômas to be “the first great movie experience”. It’s not hard to see why. Here is a film of rigorous photographic naturalism. It records the streets, the clothes, the decors and the furnishings of all strata of pre-war Paris society in ravishing detail. Everything, right down to the piles of horseshit in the streets and the passers by staring at the camera while the actors go about their business, is redolent of the most unforced and natural images possible. It’s also worthwhile noting that the acting is more restrained than say in L’Herbier’s film and there is less obvious encouragement to emote even at the most dramatic moments.

Fantômas on DVD consists of the five separate Fantômas films, each made up of a number of episodes, based on the literary creation of the pulp writers Marcel Allain and Pierre Souvestre. In each, Fantômas is pitted against the redoubtable Inspector Juve and Juve’s sidekick, the handsome young reporter Fandor. The films are largely tales of battles of wits between Fantômas and Juve. Both resort constantly to disguises throughout the five hours and thirty-five minutes that the combined films last.

It’s a long slog if you try to do it in a night or two. In fact it might have been a long slog for Feuillade as well. By the time we get to the fourth film Fantômas Contre Fantômas the mood has become quite playful. Inspector Juve is bundled out of the way after being arrested for being Fantômas and being unable to prove his innocence. Fandor steps in to keep up the pursuit. By the halfway mark Fantômas has organised a masked costume ball to which have been invited the cream of Parisian society. He intends to gather his enemies into the one spot. That night there are not one but three Fantômases darting round the dance floor including Fantômas himself who has come, like the other two, heavily disguised as.Fantômas. Brilliant. By the time we get to the fifth film, the action, particularly the denouement where Fantômas escapes yet again, is more than a bit perfunctory but it may be that it derives from the novel on which it is based. In his piece on “Louis Feuillade and the Serial” in his Critical Dictionary (5) Richard Roud notes that “today the books seem almost unreadable.”

It is said that Feuillade influenced both Hitchcock and Lang. It’s easy to see. I suspect that Hitchcock would have been more taken by Fantômas with its playful narrative and breathtaking escapes. Lang may have been more attracted to Les Vampires where the narrative is darker, the mood more intense and the villains are set on an ever more elaborate plot designed to achieve subjugation of society and world domination. Fantômas is more simple a character. He delights in personal enrichment and seems to be lacking in political rhetoric.

The DVD of Fantômas does not have chapters so it requires the viewer to at least watch one of the five films in its entirety or else go through the tiresome process of fast forwarding to find the spot. This seems a bit odd given that the films themselves have quite clear chapters. The restoration carried out by Gaumont and the Cinémathèque Française is exquisite. The images are crisp. There are only a couple of (clearly signposted) missing scenes, moments really. There is as well further interesting material in the associated booklet. A section of the second disc, which shows up only as a question mark at the front, when opened reveals a small treasure trove of posters, stills and an old TV interview, in French only, with Marcel Allain. Needless to say the DVDs are not cheap but they are major items for collectors.

French videos may be obtained on the Internet through www.fnac.com. An excellent source for DVD material from the USA is at www.dvdplanet.com. This latter formerly traded under the name Ken Crane’s Video and also has an fortnightly e-mail service listing all new releases. Some 10,000 DVD titles are listed on the site but not all will be in stock at any one time.