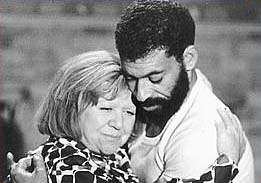 In a scene from Fassbinder’s Fear Eats the Soul, Emmy, an aging, widowed German national, and Ali, a much younger Moroccan immigrant, sit together at an outdoor café. They are encircled by an arrangement of yellow chairs; stark horizontal and vertical slats seem to entrap them. The waiters refuse to serve. Fortified in this fortress of yellow (the colour of fear, perhaps), drooping trees weigh down upon them as they are almost consumed by their surroundings. Ali looks over his shoulder away from the camera (outside of the frame) to locate the ‘other’ conspirators – a heterogenous group including the waiters and some seemingly incidental figures (an old man, a young man, a young woman, dressed informally, but, rather comically, present in the apoplectic tableau of gapers). The camera takes us to them in a slow tracking shot awakening us to their presence, cajoling while simultaneously alienating.

“All stare”, is Ali’s inclusive enunciation, severing the boundaries between the intra-diegetic private/public space and aligning it with the fourth wall/fourth look, eliminating viewer neutrality. “No one looks you in the face”, laments Emmy, but we are now positioned in the privileged space of the couple’s intimate discourse and unavoidably we DO continue to gaze. “Stare, stupid swine!” Emmy yells, and there is nowhere else for our stare to fall.

Fassbinder’s films revolve around an awareness of watching a film as much as the unveiling of a dramatic scenario. By emphasising Brechtian methods of distanciation used in his ‘epic’ theatre, transposed to the screen with distinctly cinematic devices – the tableau, tracking shots, fast speed zooms, distortion of the space-time continuum – he formalises the manner in which characters interact and experience social reality, while simultaneously bringing to the viewer’s attention the construct of the film itself. Littered with characters like Emmy and Ali existing on the margins of society, Fassbinder’s cinema is a struggle for the search for identity and place in a world (his, pointedly, being a post Second World War German one) demanding conformism. Just as the “eye” of the camera seeks out and relates characters by restrictive formal composition within the diegesis, so too do the characters within enounce and acknowledge each other through a complex exchange of looks. Thomas Elsaesser goes so far as to suggest that in Fassbinder’s films, “all human relations, all bodily contact, all power structures and social hierarchies, all forms of communication and action manifest themselves and ultimately regulate themselves along the single axis of seeing and being seen.” (1)

Contained within and suggested beyond the boundaries of the frame, Fassbinder recognises the possibility of inscribing the viewer into a relation of meta-diegetic subjectivity, achieved by oscillating between the modes of self reflexive modernist formalism and conventional dramatic narrative gleaned from Hollywood style melodrama. This internal struggle exists not only as a thematic preoccupation of the text itself, but is mirrored in how the viewer is constantly re-positioned throughout the duration of these films. At one moment we are being drawn into highly emotive empathy with a character, while in the next instance being made to be aware of our being lead into a certain positioning by the intrusion of distancing formal devices. It is this “abandoning the cloak of invisibility” as Mulvey expresses it, alternating from one of to-look-at with one of to-be-looked-at that is the core of Fassbinder’s strategy. He endeavours to inscribe the spectator in the process of construction of the text, to label the viewing subject not only as recipient, but capable of agency in the unfolding of the film. Unquestionably the filmmaker selectively determines what to make apparent and a viewer unwilling to actively engage in what is a difficult process (some may say didactic) may lose the thrust of the argument, but for those who involve themselves in Fassbinder’s cinema it is a rigorous, challenging and sometimes confronting experience.

Fassbinder is not interested in offering simple solutions to his character’s woes or depicting their decision making as consistent. The impact of Fear Eats the Soul lies in the way all of the characters are shown to be fallible and flawed. Just as Emmy is despised for her actions (falling in love with and marrying the “foreigner”) she is capable of similar behaviour demonstrated by her condescending treatment of the Slavic worker, Yolanda. We are made aware that the human being who can show with a single look sympathy, affection and love beyond the dictates of the society is also socialised in a way that makes them susceptible to delivering looks of prejudice and hatred. The complexities of negotiating an identity or role in a multi-cultural society are wrought asunder as questions of race, racism, gender, self-preservation and more are confronted in the flux of existence. With Emmy we find that she constantly has to re-define herself in relation to those around her determined by whether or not she is with or they know whether she is with Ali. From the local shopkeeper to her co-workers to her family to complete strangers, Emmy becomes increasingly defined by who is looking at her. It is almost as if her and Ali don’t exist unless someone is looking at them.

It is the effect of this re-addressing of the character’s social standing that, by implication, we are asked to question our own willingness to be swayed by social convention or what is presented before us in any given situation. How is it that we can empathise with Emmy’s plight, the social ostracism she is subjected to, if she is also someone who evinces similar behaviour? We are drawn into this ambiguity of the filmic spectacle where the relationship between spectator, camera and narrative become equally integral functions of our response. For the spectator, like our hapless couple, there is no place where we can avoid the complicity of the exchange of looks. At the café, almost in desperation, Emmy asks Ali to travel to a place, “somewhere where no one will stare at us”. The statement attempts to reinvent their reality, and can not only be understood as the impatient anticipation of a hoped-for-happiness, but also as a recognition of the boundary that is about to be crossed, of entry into a space that is different, sacred and yet unobtainable. The viewer is capable of transgressing space and creating that fantastic world, but Fassbinder denies us as the camera returns us to the place where we were initially implicated as complicit. All stare, all comply.