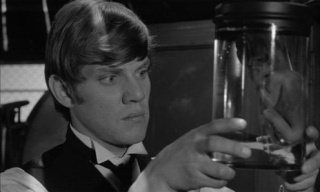 One man can change the world with a bullet in the right place.

– Mick Travis (Malcolm McDowell) in If….

A cinematic hand-grenade lobbed squarely into the lap of the Establishment, If…. captures the myth of 1968 – its dream of worldwide student revolt – in a way no film has done before or since. Winning the Palme d’Or at Cannes only a year after worker and student protests had forced the Festival to shut down, it became (and remains) a hymn to beauty and violence, an anthem for idealistic and disaffected youth. Yet while If…. shot its director, Lindsay Anderson, to international fame, the film did not originate with him. Its screenplay (or rather, a rough draft entitled Crusaders) first caught the eye of Seth Holt. A maverick known for his work at Hammer Films (The Nanny [1965], A Taste of Fear [1961]), Holt was a strangely apt godfather to If…., which remains – in the truest and most chilling of senses – a horror movie. One that is no less grisly for being set in that banal and highly recognisable world, the English all-boys public school.

It was because he had not attended public school – and, hence, felt unable to portray the bizarre and arcane rituals on which it relies – that Holt finally chose not to direct the film. He passed the script on to Lindsay Anderson, an alumnus of Cheltenham College. In the ultimate schoolboy revenge, Anderson shot If…. largely on location at his alma mater – having shown the headmaster a bowdlerised script he described as “a bit like Tom Brown’s Schooldays” (1). The school, as it appears on screen, is not one Harry Flashman might recognise.

Into this grotesque yet all-too-real world, If…. injects fantastic nightmare visions not wholly alien to Gothic horror. Gunned down in a schoolboy rebellion, the predatory paedophile chaplain rises out of a drawer in the headmaster’s study – much as Count Dracula rises, sequel after sequel, out of his coffin. The housemaster’s sex-starved wife wanders naked through the boys’ dormitory – somnambulant and wanly alluring as a vampire bride.

While cleaning out the school cellars, the rebel hero, Mick Travis (Malcolm McDowell), unearths a pickled human foetus in a jar, evoking, eerily, the homunculi grown by Dr. Pretorius (Ernest Thesiger) in Bride of Frankenstein (James Whale, 1935). Having contemplated this “mystery of birth and death” (3), Travis and his cohorts set fire to an enormous stuffed crocodile – an homage to the stuffed giraffe in the Surrealist classic, L’Âge d’Or (Luis Buñuel, 1930)? Other fantasy scenes (either never shot or excised from the final cut) included a poltergeist turning beds upside down, and boys flying unaided over the quadrangle while the school matron lay naked underneath.

Sex is the one authentic taboo in this world of enforced adolescence. Not the furtive homosexual desire of the chaplain – brutally thrusting his hand down a small boy’s shirt in the middle of an algebra class – but naked, honest, blatant, incendiary lust. This includes the passionate and animalistic grappling of Travis with a voluptuous waitress on the floor of a greasy spoon café. Yet it is palpable, too, in the longing gaze of an angelic junior boy (a plumper sibling of Tadzio in Death in Venice [1971], soon to be filmed by Luchino Visconti) as he spies on a handsome senior doing his gymnastics. “One of the most lyrical homoerotic episodes in any movie”, wrote Gavin Lambert, “it suggests that Lindsay was working unusually close to his subconscious” (4). Once both relationships have been consummated (a shot of the two boys sharing a bed had to be kept secret from the younger boy’s mother) it seems inevitable for Travis and his gymnast friend to recruit their lovers to the cause of revolution.

The revolutionary climax of If…. – in which Travis and his friends take to the roof with machine-guns, raining bullets down on teachers, parents and assorted dignitaries – may be the most bizarre and contradictory episode in the whole film. It has often been seen as inspired by the anarchic finale of Jean Vigo’s Zéro de conduite (1933), a much lighter tale of unrest at a boys’ boarding school. However, as Lambert has rightly pointed out, “Vigo’s schoolboys are mischievous children who pelt teachers and governors… with tin cans and old shoes” while “Lindsay’s are lethally angry adolescents” (5). While the characters and settings may be analogous, the stakes in If…. are immeasurably higher. The act of rebellion is explicitly – indeed, brutally – no longer just a game.

It might be possible to put this down to the radicalised political context of 1968. Yet Anderson stressed repeatedly that he did not want Travis and the others to reflect the fashionable anti-Establishment posing of radical 60s youth: “They are not anti-heroes, or drop-outs, or Marxist-Leninists, or Maoists or readers of Herbert Marcuse. Their revolt is inevitable, not because of what they think, but because of what they are.” (6) Their cause is not that of one particular political or social ideology opposed to another. Rather, it is a spontaneous rebellion of youth versus age, freedom versus conformity, life versus death. Nor was Anderson himself in any way optimistic about its outcome. “It doesn’t look to me as though Mick can win. The world rallies as it always will, and brings its overpowering fire-power to bear on the man who says ‘No’.” (7)

Only once If…. was safely inside the editing suite did events in the real world catch up, unexpectedly, with the turmoil on screen. In May 1968, students in Paris hurled paving stones at the police and called out to a generation – “Be realistic, demand the impossible!” (8) In the United States, youth rioted outside the Chicago Democratic Convention in protest at the Vietnam War. In Czechoslovakia, the illusory freedoms of the Prague Spring were crushed by Soviet tanks. By the time If…. opened in London as a last-ditch replacement for Roger Vadim’s soft-porn sci-fi romp Barbarella (which had unaccountably flopped), Anderson found himself a reluctant mascot for a movement he had never wanted to join.

Much of the critical fall-out was not to Anderson’s liking. Pauline Kael excoriated If…., along with Dennis Hopper’s Easy Rider (1969) and Haskell Wexler’s Medium Cool (1969), for a “self-serving negativism” that she saw as little better than the platitudinous happy endings characteristic of old Hollywood: “The audience is probably just as much aware of the manipulation for the sake of beautiful violent imagery… and it probably knows that these apocalyptic finishes are just as much of a con.” (9) Anderson took the unprecedented step of dividing advertising posters down the middle – with glowing reviews on one side, damning reviews on the other. Emblazoned across the top was the question: “Which Side Will You Be On?”

Throughout the world, If…. fell foul of authority in all its more obnoxious guises. In Greece, under the dictatorship of the Colonels, the final insurrection was cut out. Portugal, in the twilight years of Salazar, banned the film outright. The apartheid regime in South Africa passed it strictly “For Whites Only”, for fear that the non-white population might get the “wrong” idea. Already viewed askance by the British film industry, Anderson had great difficulty funding his future projects, O Lucky Man! (1973) and Britannia Hospital (1982). The catastrophic failure of the latter – viewed as unpatriotic in the year of the Falklands War – made him virtually unemployable in his later years. (The film was, curiously, a major success in Argentina.) At the time of his death in 1994, Anderson was still trying to script a sequel to If…..

Yet If…., unlike many self-consciously trendy films of the 60s, has become more and not less topical as the years have passed. We live today in a world more similar to College House than at any time since the film was made. The forces of bourgeois conformity, which sent McDowell and his allies running to the rooftops – gun in hand – today go unchallenged, both on the resurgent Right and on the soi disant Left. After forty years of disenchantment, If…. is still a rallying cry, an unlikely and uncomfortable message of hope. It was Anderson himself who said it best, “While there are still minds to be moved, imaginations to be stirred, a true film may yet perform its explosive, life-enhancing function. We may yet be revenged.” (10)