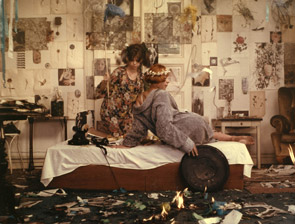 I wanted to use colour concepts to disparage a lot of things. I had no intention whatsoever of arousing an aesthetic impression of beauty. But somewhere, early in the game, it turned out that the structure of things with respect to each other created aesthetics whose results I didn’t expect at all.

Out come the scissors. A woman cuts through a field of black cloth (doubling as the screen of the spectator) and around the body of another. One plays mannequin to the other’s dressmaker. The scissors move from field to body as the first woman (both are named Marie) cuts at the second’s clothing. “Too much!” she says and cuts off the other’s arm. They cut off each other’s heads, which float across the screen asking, “Does it matter?”, and answering, “It doesn’t matter”.

Now the filmic space itself comes under attack. The picture shatters into a cubist mosaic as the two Maries, playing their mad game and grinning the whole time, chase each other with scissors snipping away. Their bodies have become animated fragments, as unstable as this remarkable film itself. The scissors have become the film editor’s “scissors”. In this scene Daisies’ formal strategies of collage, juxtaposition and deliberate spatio-temporal indeterminacy burst into the narrative.

In describing this scene I have alluded to game playing, formal experimentation and (bodily and filmic) instability. These elements could also be understood as the defining features of the collaborative processes undertaken by the three chief architects of the film. Daisies was made in 1966 from a State-approved script by director Věra Chytilová, who co-wrote the screenplay with costume designer Ester Krumbachová – though her contribution can be more accurately apportioned if considered in terms of an art director’s work. Cinematographer – and Chytilová’s husband – Jaroslav Kučera introduced abrupt colour shifts, jump cuts and rapid-edit photomontages that irrupt into the narrative.

In contrast, on one level Daisies is a highly structured film. In telling its story of two girls who – in the face of a spoiled world, decide to “go bad” – it utilises a formal logic of repetition to successfully destroy narrative and the psychological development of character. A prologue of images of war and destruction – “an enflamed modernity that Daisies will make it its task to attack in its assault on manners” (3) – is combined with a precise declaration of intent – “we will be spoiled too” – from the two Maries. What follows are a series of scenes in which the two Maries set about exploiting a string of older men, staged each time in terms of preparation, attack and escape; taking place on a gender-battlefield of – respectively – public lavatory, restaurant and train station. The two Maries are “guerrilla girls” staging raids against the social hypocrisies perpetuated by the older married men who believe that they will be able to exchange material favours – in the form of expensive meals – for sexual ones.

These scenes alternate with reflective ones in the girls’ apartment where they consider such things as ennui, death, consumption, romantic meaning, authenticity and destruction. Outside of but framed by these repetitions, major scenes position the girls in the contexts of innocence (a Garden of Eden), role-playing (a cabaret), the impossibility of romantic fulfilment (with a man who equates love with the pinning of butterflies to a specimen case), socialism’s valourised site of authenticity and meaning, labour (represented here by workers in the country), and a final confrontation with destruction and consumption (the gleeful demolition of a banquet that leads to the girls “rehabilitation” and ultimate punishment through death) (4).

Any stability suggested by the formal structure of the film is, however, simultaneously undermined by other disruptive formal cinematographic strategies. Bliss Cua Lim puts it succinctly when she writes:

Disjunctive montage, jump cuts, unstable spatial relations, abrupt changes in colour tone to fracture long takes and a knowing use of sound bridges and matches on action in order to give the impression that the diegesis continues across temporal and spatial ellipses present the spectator with a picaresque narrative that at times seems to border on incoherence. (5)

Here then we can address the film’s fundamental and productive instability. These disruptive formal strategies, working in a dialectical relationship with “narrative” and “structure”, destabilise meaning and encourage an active spectatorial engagement with the film.

Chytilová’s characterisation of the film as “a philosophical documentary in the form of a farce” has been widely repeated (6). She has always maintained – well after communism’s fall removed any political imperative (7) – that the film is a “morality play” staged to condemn its two protagonists on ethical grounds.

Before shooting, Chytilová also claimed that the (collaborative) production of the film would be characterised by complete freedom. Only the dialogue was to remain fixed, and would act as “a guardian of meaning” – everything else was to be negotiated by the three authors (9). That the State-approved dialogue was to remain inviolable likely reflects the realities of the nationalised Czech film industry of the 1960s – an over-determination which, following Lim, both constrains and accounts for the overt declarations the film and its makers have made (10).

Auteurist approaches to the film are confounded not only because of these historical contingencies and the film’s collaborative nature – note that my earlier delineation of Chytilová et al.’s roles should be understood as an artificial description of a permeable process – but because of inherent instabilities built into the film-object by its authors. As Peter Hames asserts – in his crucial work The Czechoslovak New Wave – Chytilová (though this should be extended to include Krumbachová and Kučera)

demands freedom for herself as creator and freedom for the audience as spectators, intending that the interplay between the two should be active. In that collaboration, the spectator must be constantly on the alert, the rapidity of the film and its disjunctions constantly threatening or “reversing” his first interpretations. The point of the film is to make a single interpretation impossible, to force a conclusion that what has been seen constitutes only part of the “truth”. (11)

This “productive instability” is a key to the film’s lasting interest. The socialist bureaucrats who banned Daisies for its depictions of food wastage and barred Chytilová from working for six years from 1969 to 1975 on the grounds that she lacked “a positive attitude to socialism” (12), auteurists, the Western critics who have appropriated it as a feminist work on the grounds that it revels in its heroines’ transgressions against a patriarchal establishment, New Wave aestheticians, and any other late-comers to this spoiled banquet, can all be accommodated by the text.