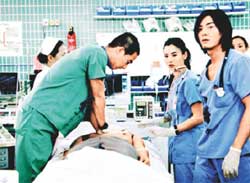 Help!!! is Johnnie To and Wai Ka-fai’s second collaboration in 2000, a follow up to their wildly successful Needing You [Gu nan gua nü]. Both producer/directors are principals of Milkyway Image film company, a consistent source of some of the highest quality and most provocative films from Hong Kong since 1997, even if box office success hasn’t kept step with critical acclaim. Commercial exigencies seem to have forced a readjustment. In Milkyway Image’s new, more populist incarnation, it is subsumed under the umbrella of powerful Chinastar owner Charles Heung’s One Hundred Years of Film company. Though the latter might pull To and Wai’s films towards greater commercial appeal, the Milkyway Image label still supplies Help with a generous quotient of darkness and acidic bite.

A black comedy with romantic and heroic elements, Help shows three young dedicated doctors (played by pop stars Jordan Chan, Ekin Cheng, and Cecilia Cheung) mired in the bureaucratic nightmare of the Sir Ho Kau Kei Charity Hospital. In this institution, doctors and nurses take cell phone calls during operations, leave critically ill patients abandoned in hallways when their shifts expire, and generally do far more harm than good. The hospital is run by faceless Kafkaesque bureaucrats (who, in a beautifully conceived series of set-pieces, scrabble timourously at blue window blinds when approached and actually scuttle, ratlike, when exposed to the light, all to a score reminiscent of the rodent music of Tchaikovsky’s Nutcracker).

Eventually, the selfless heroism of the three doctors makes an impression upon the rest of the hospital staff, who start to rededicate themselves to public service and a sense of professionalism. Fired for their rebellion, though, the young doctors return when a rainstorm and landslide create a vast traffic disaster. The film here veers unexpectedly into disaster-pic land, then flashes sideways to romance, as the developing love triangle between our three young heroes is resolved on a storm-tossed and lightning-swept hospital rooftop.

The film never seems to take itself seriously: the doctors, and the endless emergency room set pieces (think constantly repeated shouts of “clear!”, defibrillators in hand, and views of flat-lined oscilloscopes starting to waver with life-bestowing force) come straight out of American and Hong Kong TV medical soaps. But these are mere set ups for deflating gags, cynical commentary, even bloody-gloved romantic groping between doctors inside a patient’s chest cavity. Much of this is funny, and much more is just over-the-top silly. The screenplay is not concerned with maintaining anything like an even tone: an excessively slap-dash structure might have benefited from serious winnowing, sharpening, and rewriting. A particularly unfunny bit, for example, involves a street person who will go to any length to woo Cecilia Cheung’s character: this is uncomfortable to watch, and paints her character in an oddly harsh light.

Visually, though, Help sustains the Milkyway Image production crew’s top notch, even over-generous level of creativity. For example, the film is shot in generous wide-screen format (an unusual choice for wacky satire). Cinematography exhibits the constantly plastic, inventive use of framing and mise en scène that Hong Kong movies can still deploy without any seeming effort at all. Ace composer Raymond Wong Ying-wah provides yet another fine musical score, which also seems far more appropriate for a film of “quality” than for the quickly slapped together satire that Help pretends to be.

As for the performances: well, they are good enough. Jordan Chan (who once, not too long ago, exhibited such promise as the Hong Kong film industry’s finest young actor) is in overdrive, again, but then so is the film. Ekin Cheng, largely typecast in pretty boy/heroic roles, does no harm here, and actually seems to be able somewhat comfortably to inhabit his role (as a young doctor who’s traded it all in for a life as a crack car mechanic). Cecilia Cheung doesn’t coast on her “It Girl” credentials (as some roles tempt her to do), and makes a creditable effort to impersonate a determinedly professional young idealist. Supporting roles are played in the very broad and sloppy Hong Kong comedy style, with the exception of the above mentioned bureauc-rats.

Help is a treacherous film text that mobilizes a number of possible readings, none of which is necessarily consistent with the others. I would like to offer two, here: first, Help as political allegory, and second, Help as self-reflexive text (and this reading will act to destabilize the first).

Several critics have read the Sir Ho Kau Kei Charity Hospital as a microcosm of post-1997 Hong Kong. And it is easy to see why: the Hospital is a self-contained society ruled by absolutely unaccountable, insular, and perpetually frightened bureaucrats. It is only through the extraordinary intervention of professionals / doctors who ignore or defy the bureaucratic regime that its citizens / patients can be saved from neglect or peril. Help manages to sneak in a detail or two that make its political subtext all the more acute. On a wall in a hospital hallway, we briefly see a commemoration plaque in Chinese. This plaque is then privileged with its own very brief closeup, which lasts long enough for us to read “Sir Ho Kau Kei Hall. Sir Ho Kau Kei Charity Hospital was established on May 23, 1989. On July 1, 1997, Sir Kau Kei revisited the Hospital and donated another sum of money to help establish the A & E Building and all the most advanced medical equipment.” [italics added]. The second date is self-explanatory: 1.7.97, the date of Hong Kong’s return to Chinese sovereignty, is the classic signifier in Hong Kong cinema of the ’80s and ’90s. May 23, 1989 is less well known, but no less significant. Just a week and a half before June 4, 1989 (the traumatic end to the Tiananmen Square protest movement in Beijing), the day marks perhaps the high water mark of that movement, when over a million Beijingers took to the streets to stop and turn back the Peoples Liberation Army, preventing its first attempt to march into the city centre. So the filmmakers of Help have chosen to mark, in a tiny detail of set decoration, a striking historical instance of a people’s successful mobilization to oppose the power of the state, as well as the date marking the formal entry of the people of Hong Kong into that very same arena. I’ll leave it to you to weigh just how coincidental this may be, given Help‘s other preoccupations.

As film writer Steve Erickson suggested to me, Help seems to pose a seemingly irresolvable issue of tone: is it “a humanist allegory about the importance of community”, or a film full of “cynical-cum-misanthropic humour”? This is what I found most engaging about the film: the contradictions between reality vs. fantasy and romance vs. cynicism that the screenplay stages.

To pick one example, the film has a coda revealing that what we’ve been watching is merely another television soap opera: the camera pulls back from the final rooftop scene to reveal that it takes place within a TV set inside a hospital, whose “real” staff comment on the implausibility of what they (and we) have been watching. But this is no mere abrupt trick, cynically toying once again with audiences’ expectations. We are prepared for the ending twice. Once, at the film’s beginning, when a mock-heroic ER-style montage turns out to be issuing from another TV set, and a doctor (Lam Suet) calls it ridiculously unrealistic. Then, about one quarter of the way into the film, Cecilia Cheung looks ahead to two distinct versions of Jordan Chan’s return to the hospital. In the first, he is heroic-competent, and saves someone in the emergency room with the cooperation of his colleagues. In the second, Cheung finds him sitting dejected on the ground. This time his colleagues have sabotaged his efforts: the replay is a satire of the heroism of the original sequence. But which one is “real”? Is the first subjective, in Cheung’s mind, and the second “real”? I’m not sure that we are given enough to establish this one way or the other. In which case, both options co-exist: heroic public interest plus its own satire. So the final (third) alternation from romantic rooftop “transcendence” to television’s nihilist cynicism mirrors the first, and is set up by the second.

Either this is a confused schema, sloppily constructed by the filmmakers, or it’s deliberately planned to provoke and difficult to unravel. I’d opt for the second: Wai Ka-fai, at least, has shown himself to be a brilliant manipulator of standard narrative expectations (see his Too Many Ways To Be Number One, Yi ge zitou de dansheng, 1997), and revels in this kind of brain twisting ontological paradox.

But that does not help to unravel it, completely. If the film’s “story” is thoroughly distanced by being enclosed in a wider, more cynical context, then what is the film asking its viewers to believe? What, then, is the status of the direct, point-blank parody of bureauc-rats scurrying behind blue blinds? Is that parodistic effect negated, too? There is something resembling a dialectical set-up here that feels self-reflexively complex. The best Iranian directors know how to do this so lightly that it feels like the most natural thing in the world. Wai Ka-fai and company labour over it intensively, so that the awkwardness shows and becomes part of the method of delivery.

All that Help presents – and it explicitly acknowledges this, with its epilogue – is merely a representation, necessarily false, of what one could naively term “reality”. Nothing of substance manages to secure even a toe-hold; nothing is left except for parody, criticism, and self-reference. In political terms, we have a vision of a world in which a regime of bureaucratism, oiled by the complacency of self-interest, necessarily trumps and negates the possibility of optimism, humanism, or self-sacrifice. By stripping away romance as mere ideology, even exposing humanitarianism as mere ideology, Help becomes about as radically critical a statement as anything I’ve seen on film.

With thanks to Sebastian Tse for his translations and key suggestions.